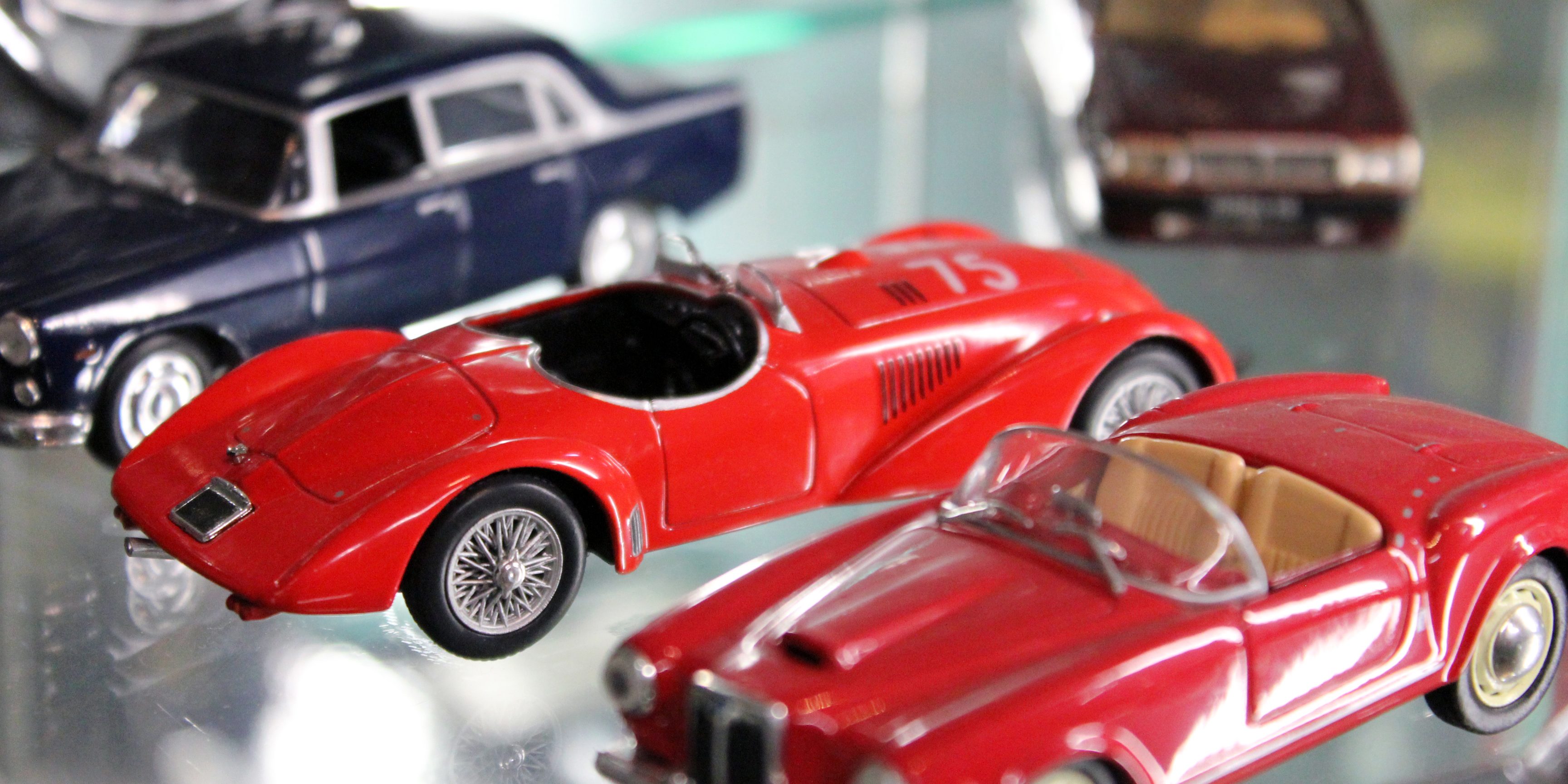 At Idris and Samuele Morselli’s Museum

How did I start collecting? Due to a passion? Yes, that was part of the reason, and because when I roamed around the country fairs, there were stands with scale models. A friend of mine said to me “look at how nice they are, they nearly look the same as the original car, I’d like to collect them”, I answered enthusiastically “do you know that you’re right?”. And that is how I started, but he didn’t. 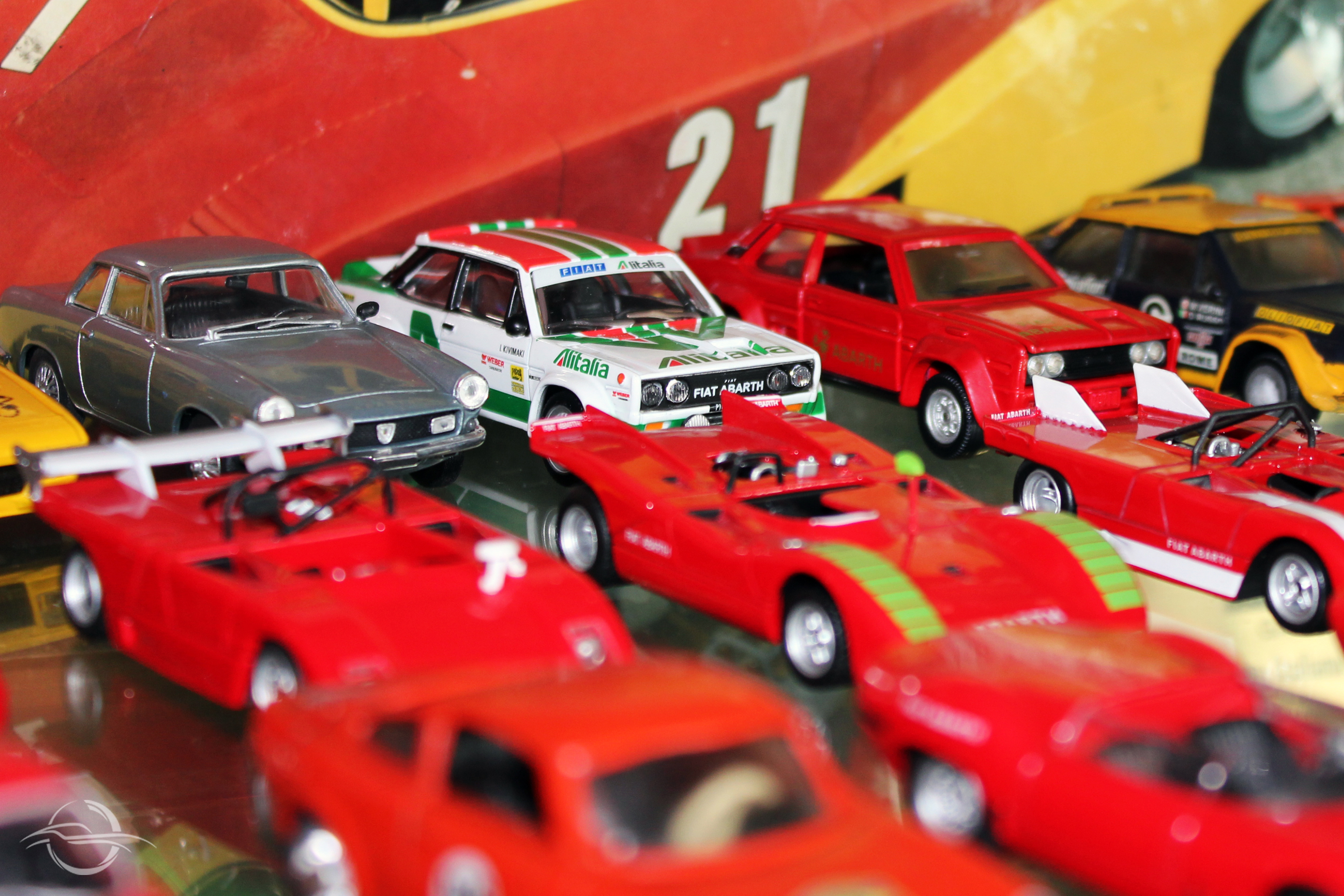 Everything started 50 years ago. 2830 scale models later, Mr Idris Morselli owns a “small museum”, which is cared for in detail, each individual item is numbered and catalogued. The glass showcases are all illuminated and the models are stored under lock and key. Mr Morselli’s perfect order was muddled up by a natural event which caused some real damage: 2014’s flood. In January, the Secchia river’s banks collapsed, and the water went over the overspill, there was a lot of work to be done to tame the mud. The signs are visible on the walls, on the models, on the collection of magazines and the dearest photo albums, which gather photographs and cards signed by Enzo Ferrari. 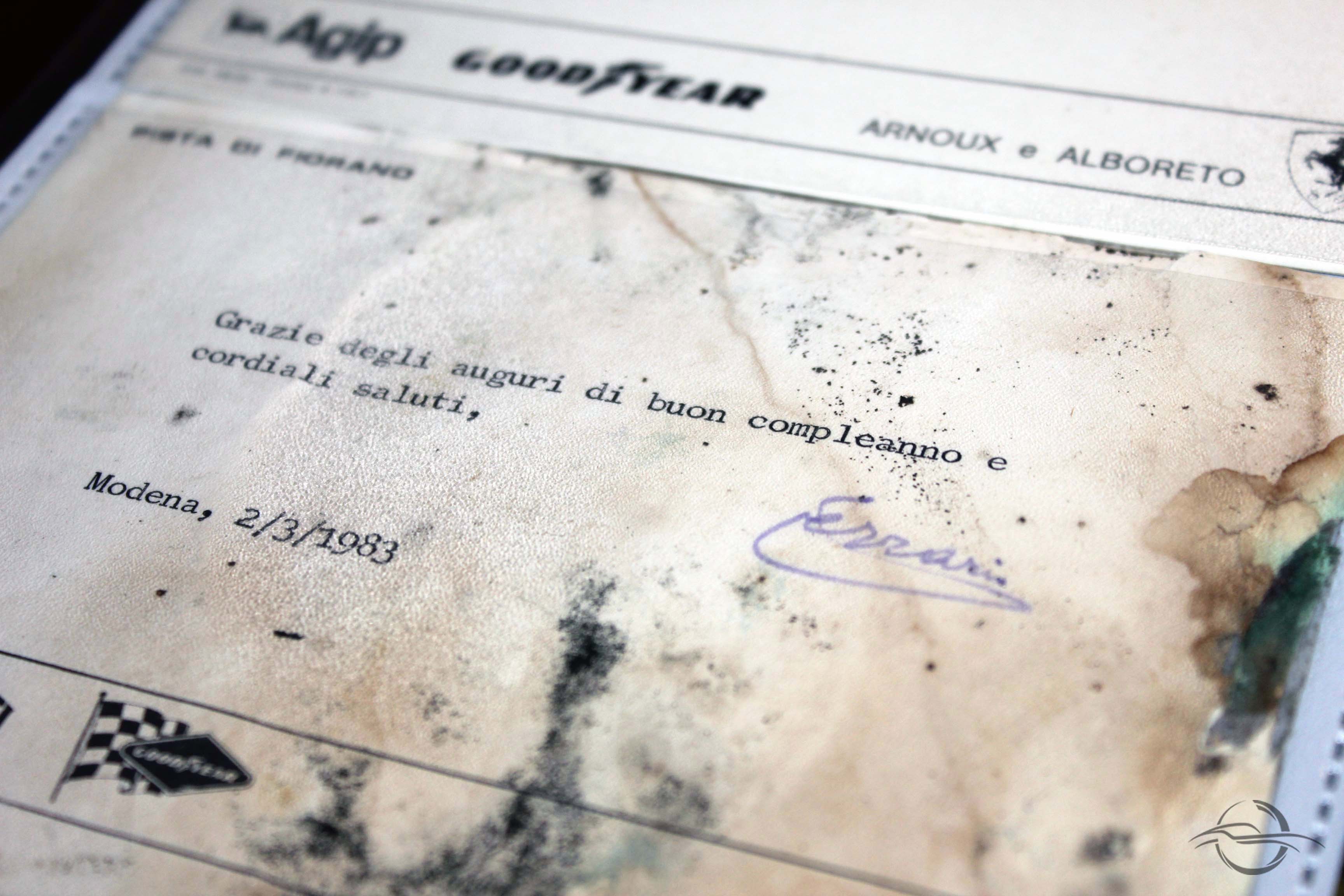 – We had to throw away many Autosprint magazines which were piled here, in a wooden cupboard, after the flood, there is a mark here. Years and years of Autosprint! Behind Idris’s words, there is both the discouragement and the fear for an event which left a mark, and not only on walls or paper.
– What about those upside-down cars?

Samuele, Idris’s son, answers entertained “At the Porsche Museum in Stuttgart, there’s a car exhibited just like that, the only difference is that it is the actual car! I was impressed. I got the idea from there and given that we don’t have much space here…”. Any which way you look, there isn’t an empty space in this garage, because herein is a 360 degree motorsports collection. 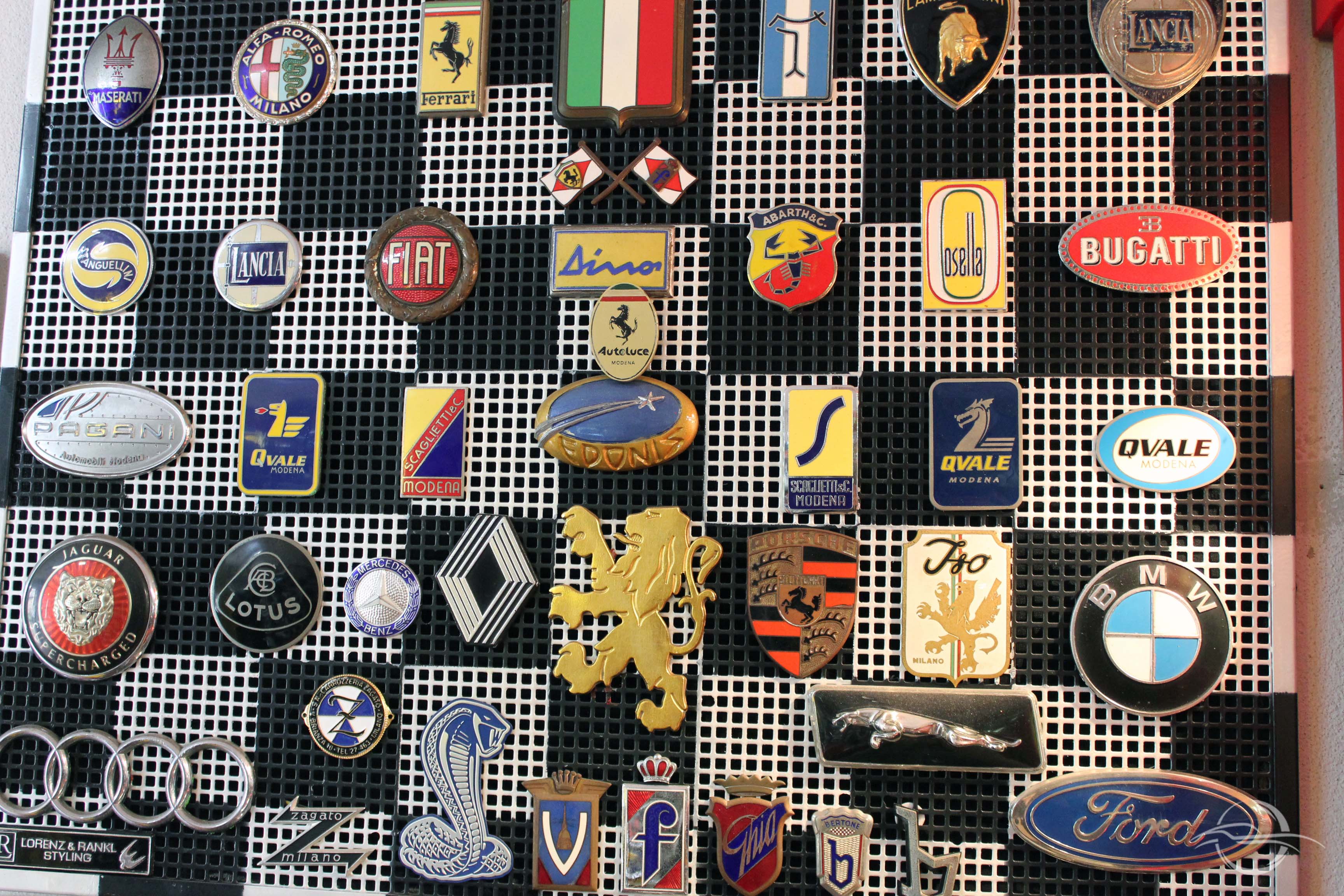 Model collection had its own evolution too: initially, the scale 1:43 was predominant. Subsequently, the collectors’ demand for more precise details and finishings, induced the manufacturers to include larger scales, such as 1:18 and 1:12. Idris explains – These are the first few models that I started to collect, then I moved on to larger models, to the 18 scale. My favourite brand is Mercury, even if the most valuable piece is this Toschi from 1952. 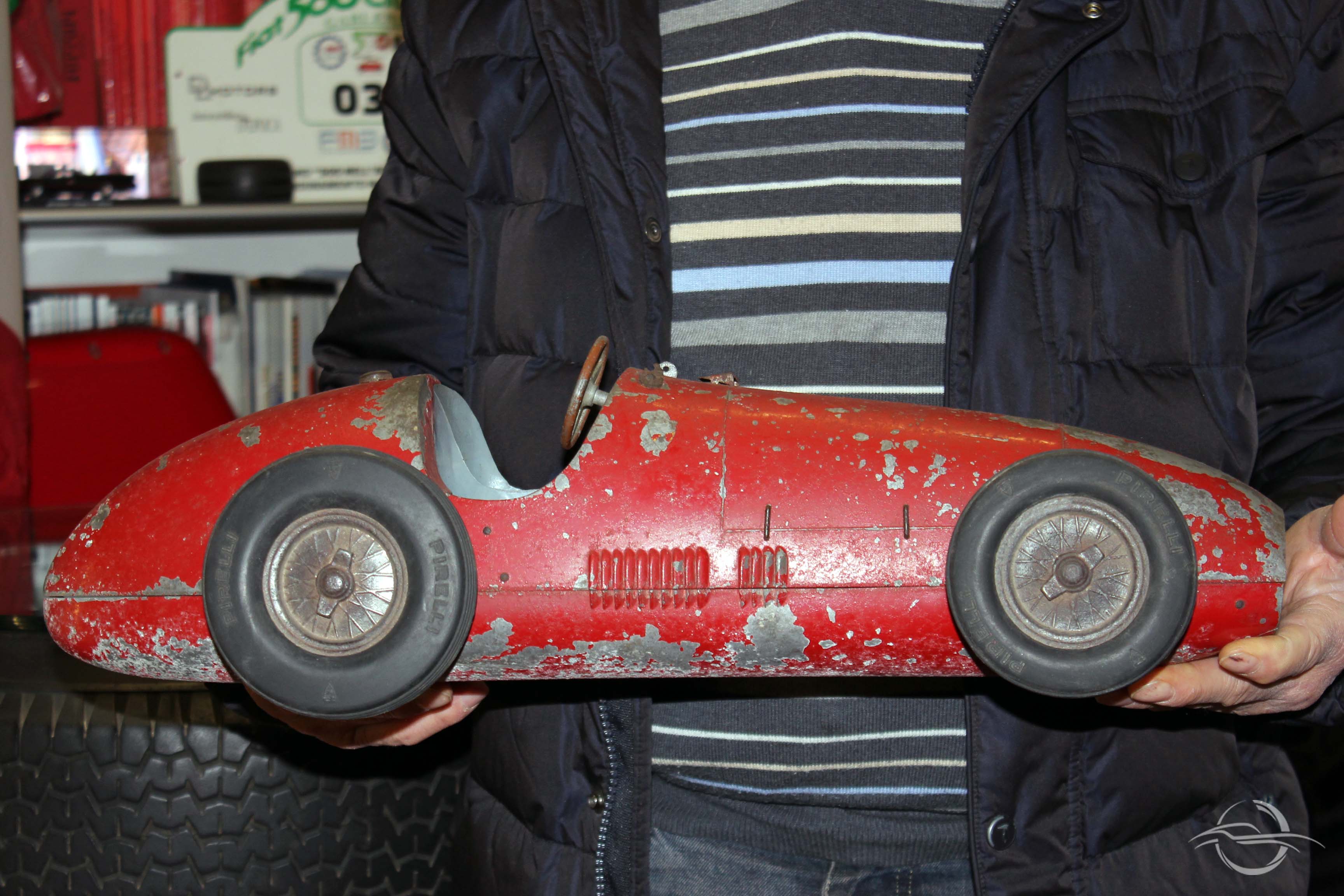 I’ve abandoned the 1:18 scale now because they take up more space and I have no space left. I even have bigger ones. Just like these which are radio controlled plastic models. Those over there are the old remote controlled models. The stainless steel wire enables you to steer the wheels and with the battery-operated switches, you drive them just like a toy. 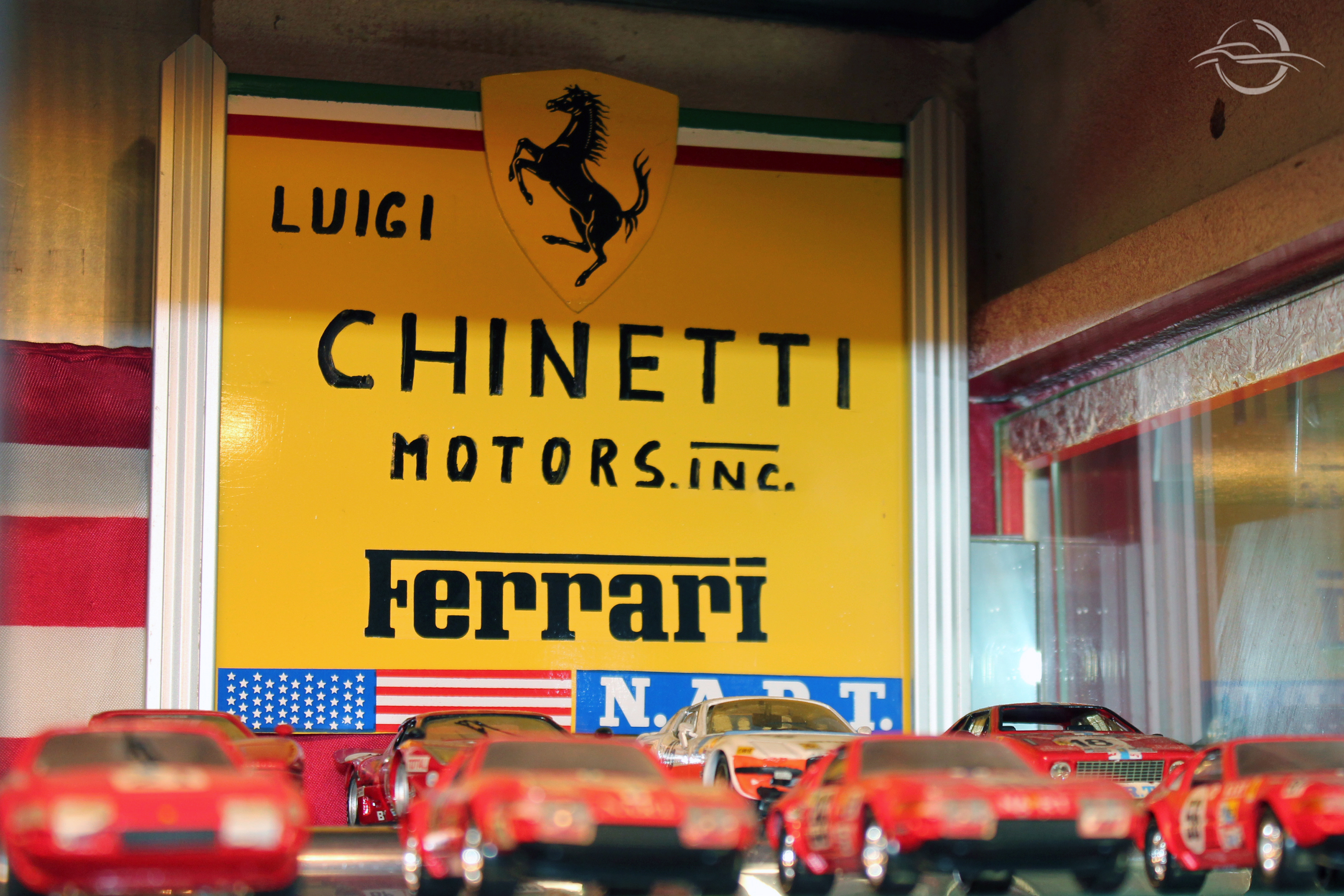 Mr Morselli is a very placid man and his voice never betrays the calmness that he conveys. His eyes are attentive observers of a passion which still yearns to discover yet more pieces to add to his collection. 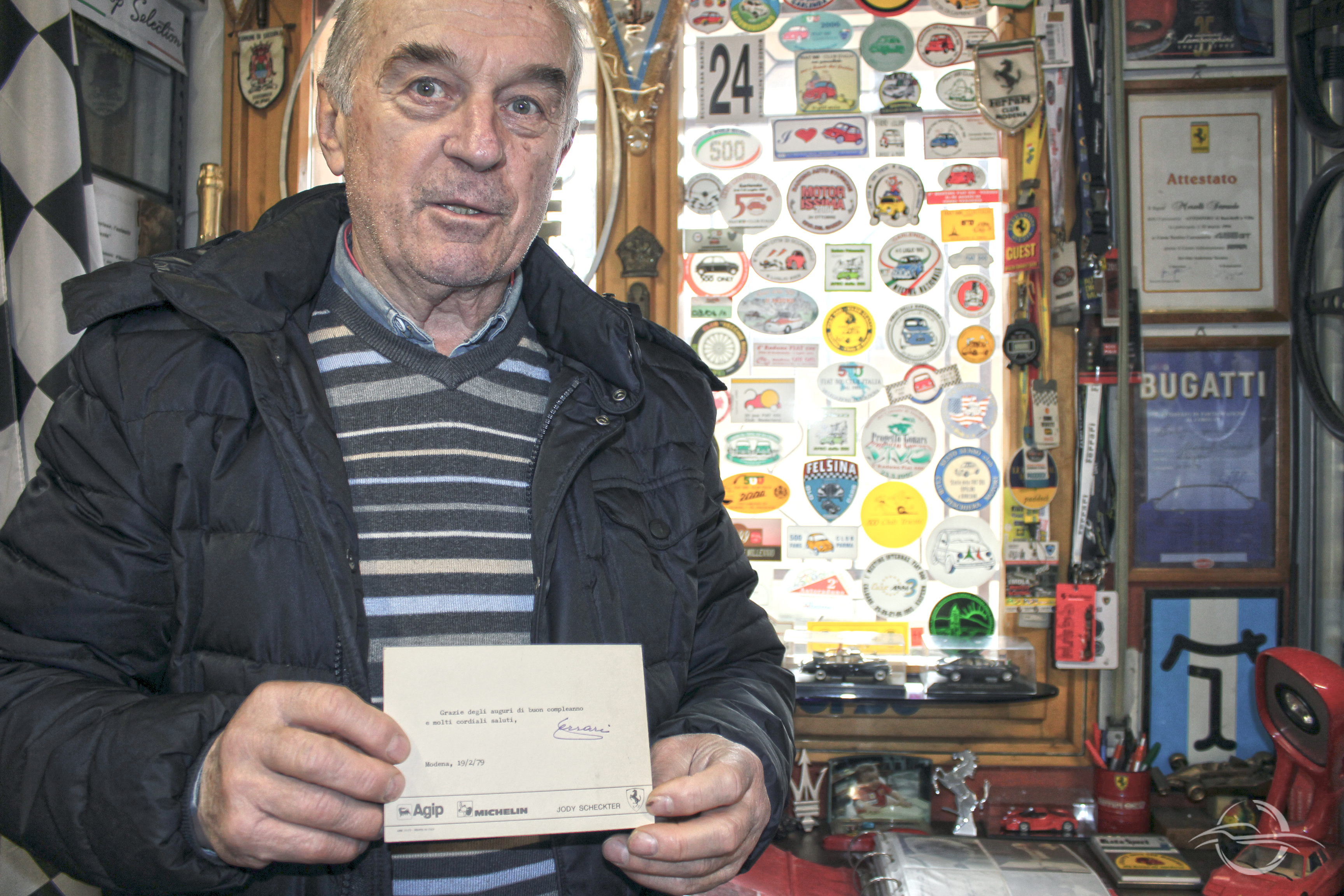 They’re aquamarine blue and they remind me of pure and naïve intuition, expressed in Pascoli’s poetry “the little child”. Idris continues to feel stupor towards his collection and my head is spinning while following his finger. 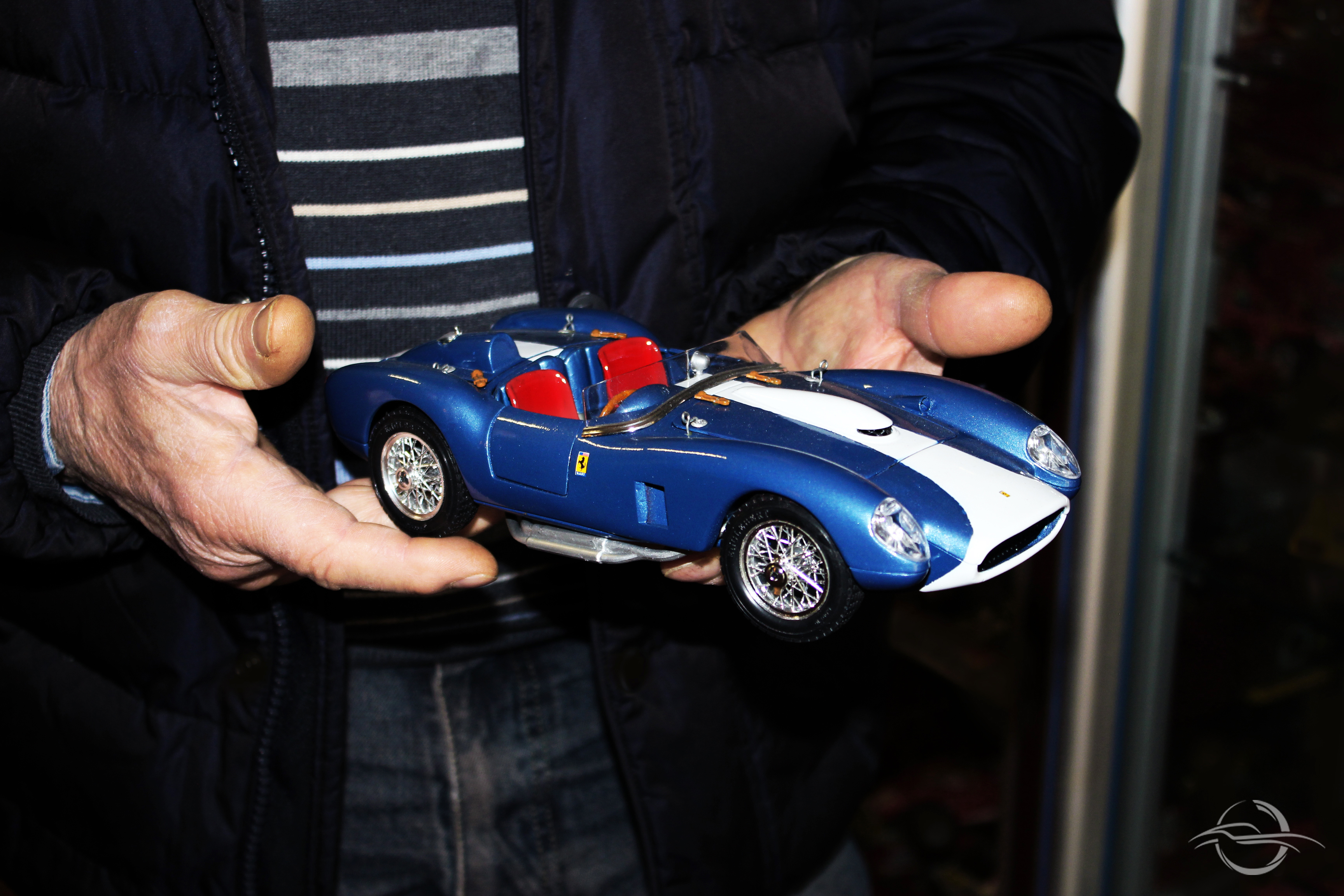 We approach the glass windows and my eyes pass over the shiny bodywork. Each brand has its dedicated shelf and most of them are there: Porsche, Alfa Romeo, Maserati, Bugatti, Lancia, Lamborghini, Lola, Fiat, Mercedes, Pagani, Jaguar, Mustang, Ford, Dragster, Cobra, Lotus, BMW – there is one Bizzarrini ISO and there is a Lamborghini with the Smurfs! However, Ferrari wins over all the others. “Well, we’re in Modena”. There is also the reproduction of the Ferrari Alfa Romeo repair shop with the wonderful queens, complete with tyre depot. 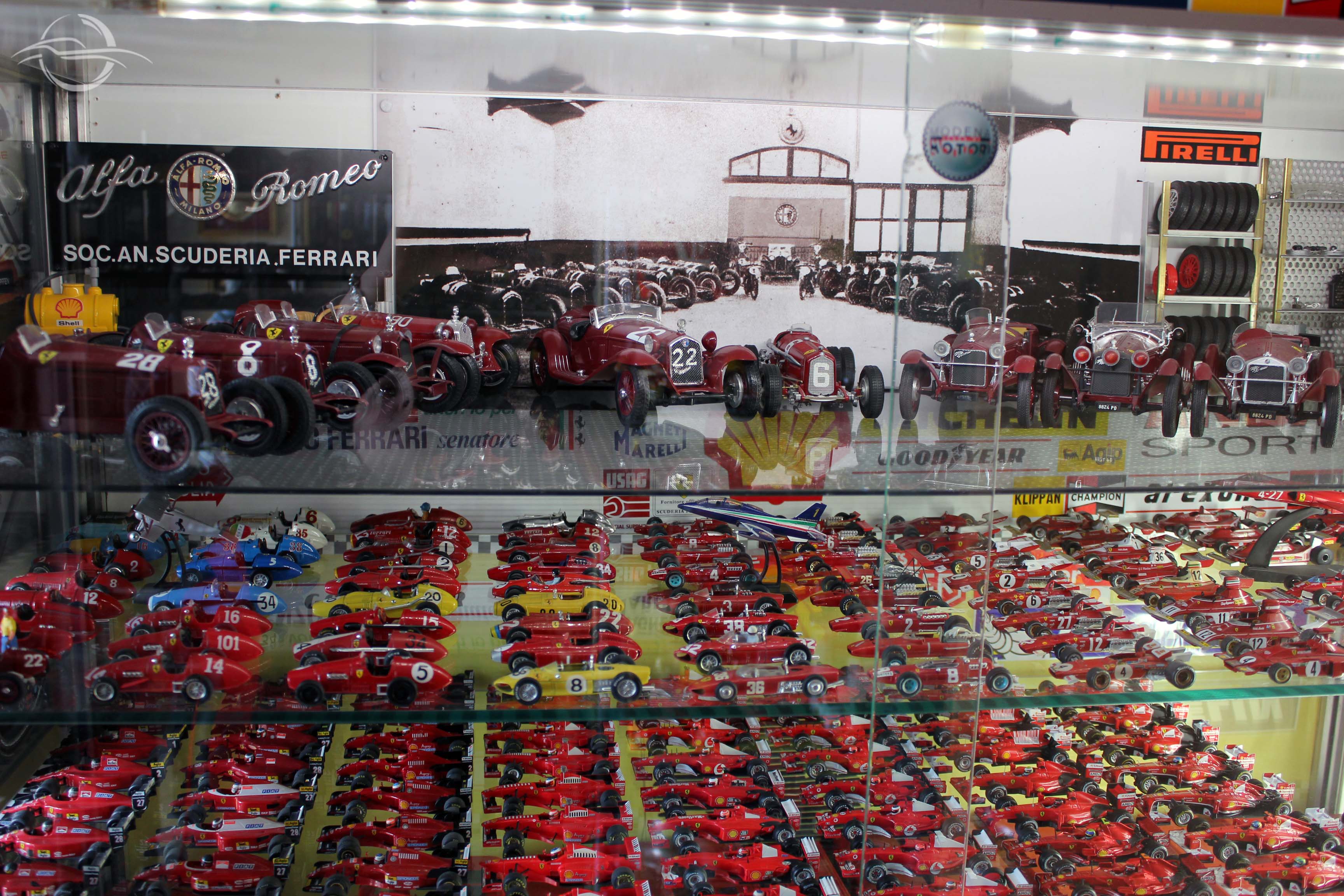 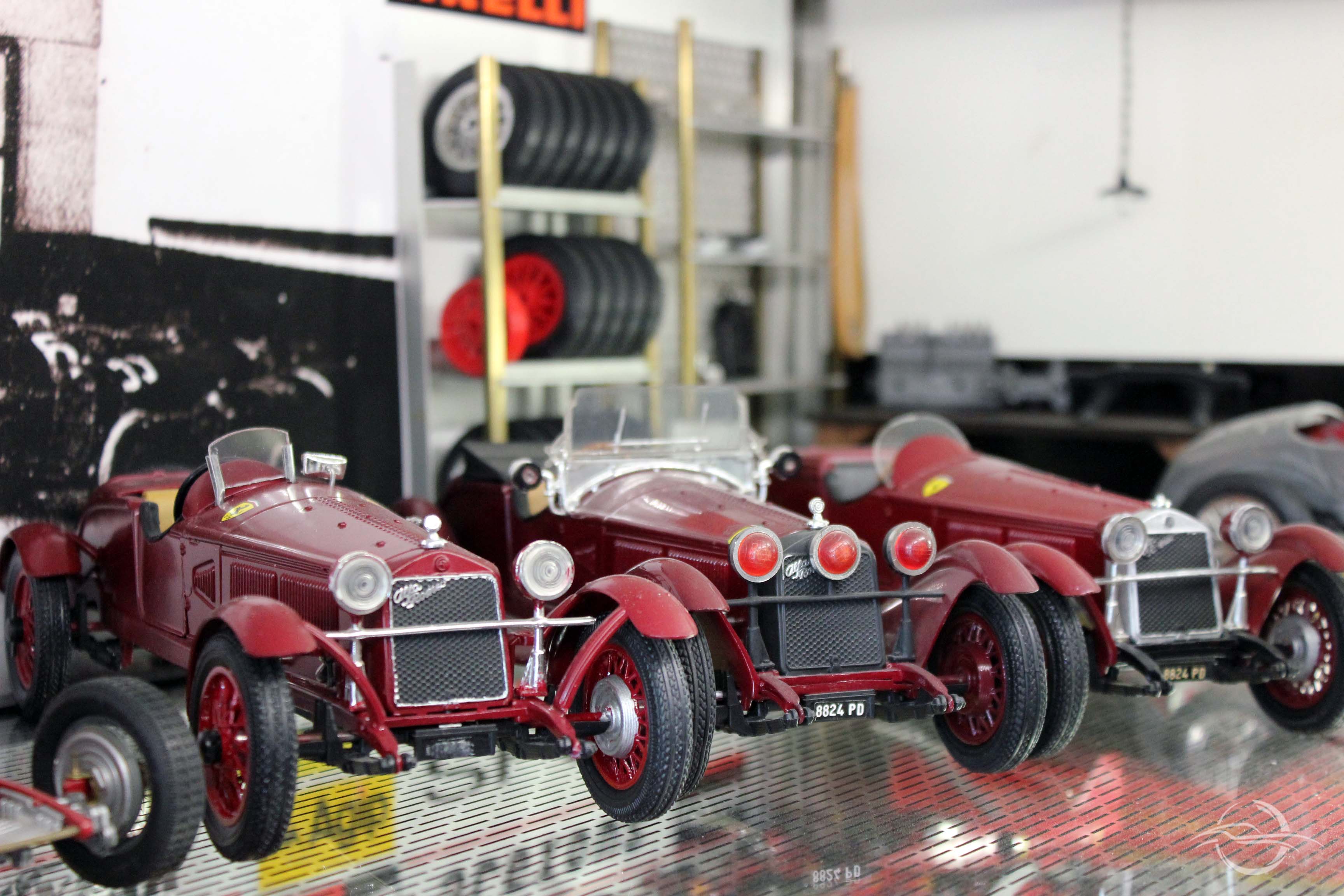 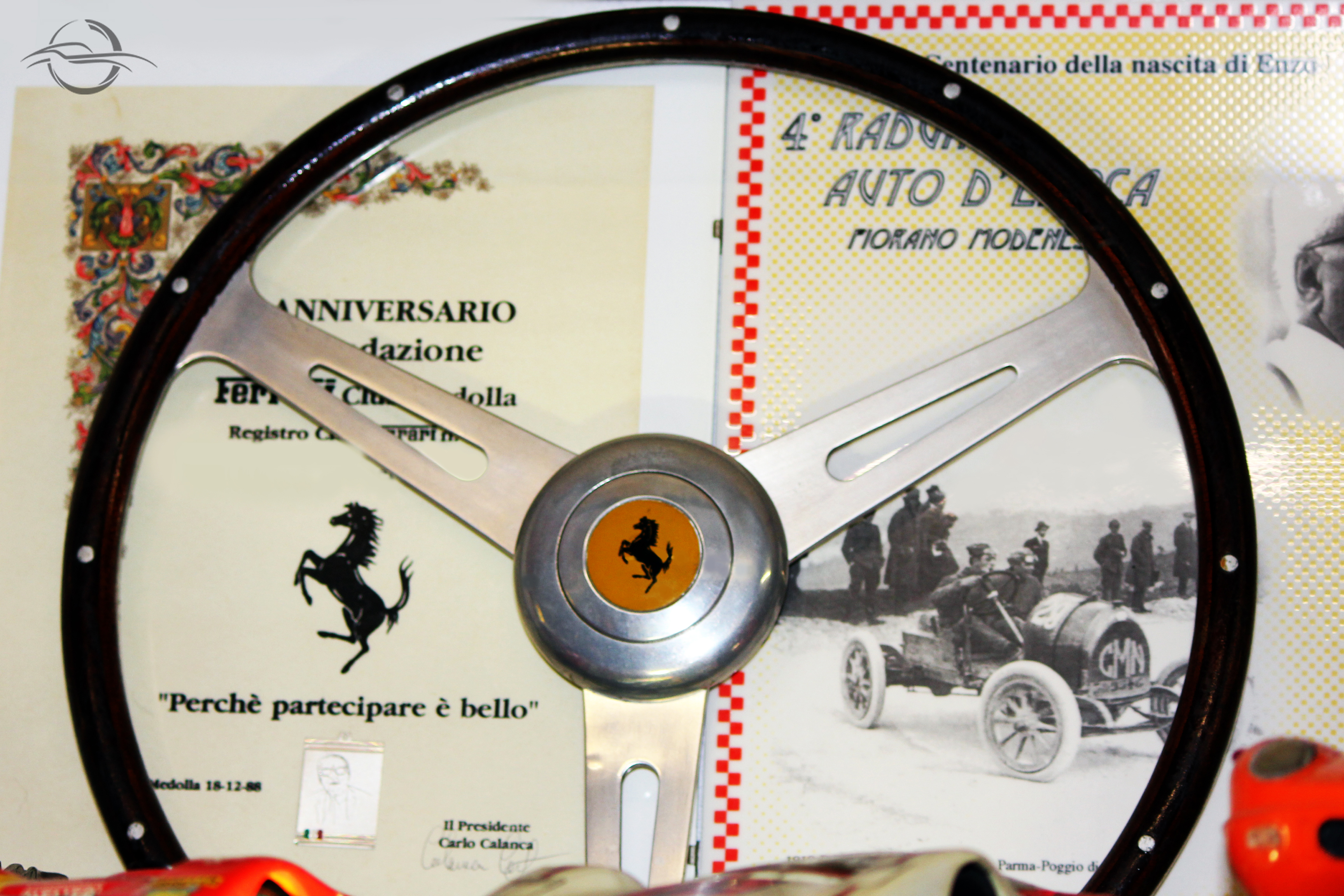 There are the F1 cars with Lamborghini engines, one is missing. There is also Senna’s McLaren, but afterwards, they didn’t sign the agreement. This is a nice F50 part, I have the other half at home. Here are some brands’ engine parts: Lamborghini, Bugatti, Maserati, De Tommaso, Ferrari, Alfa Romeo and this one is the F1’s. Here is a Lamborghini cylinder head which a lady gave me as a gift… There are the Ferrari Daytona’s valve covers.
Immersed in the atmosphere, we get lost in anecdotes and descriptions. 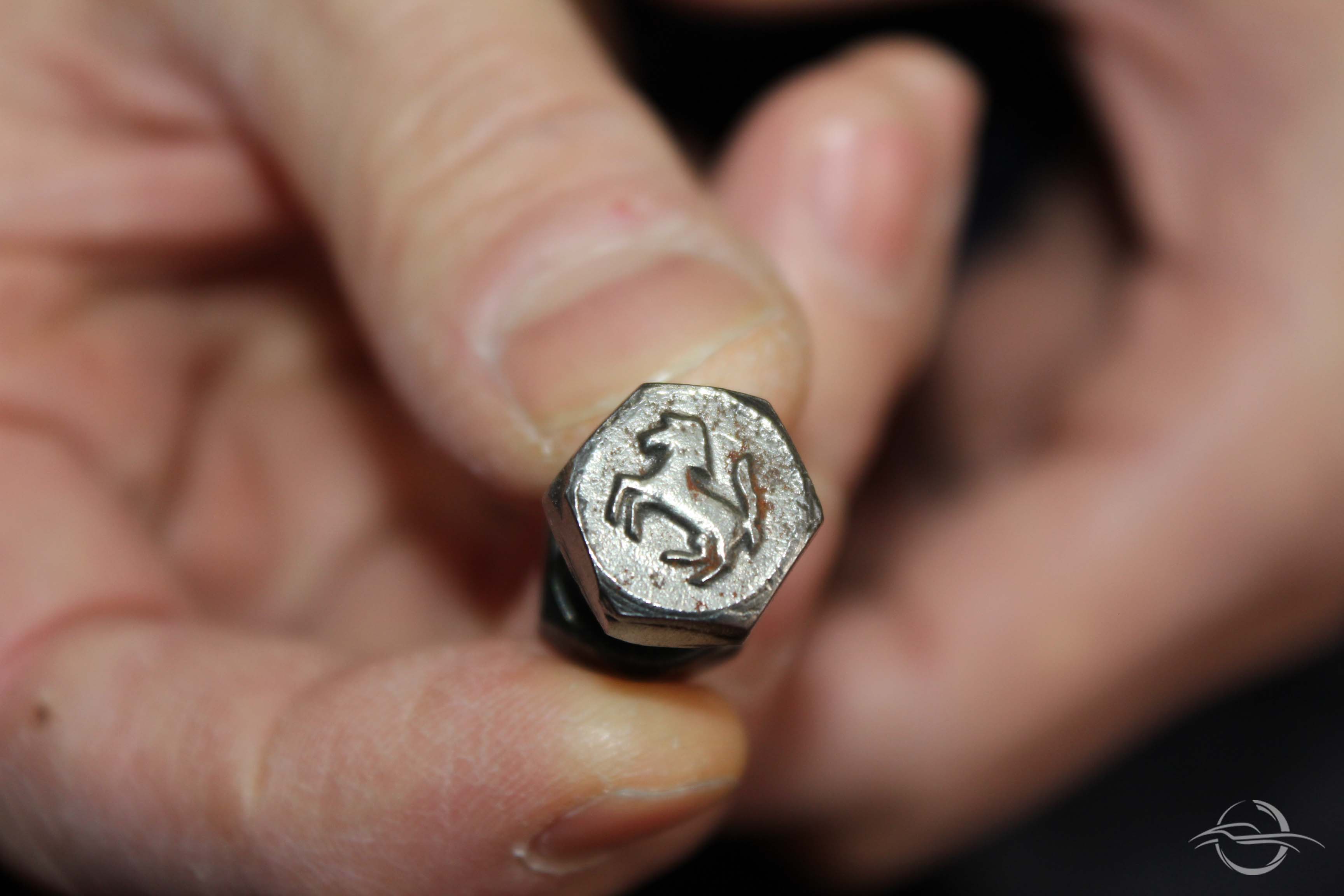 – I worked for Autosport for thirty years, I was a panel beater. In order not to lose my panel beating skills, says Idris, I started to modify some models but that’s not all, he even created the bodywork for his Fiat 500 in Modena red “look at the nose, I got inspired by the 330 P4 nose”. 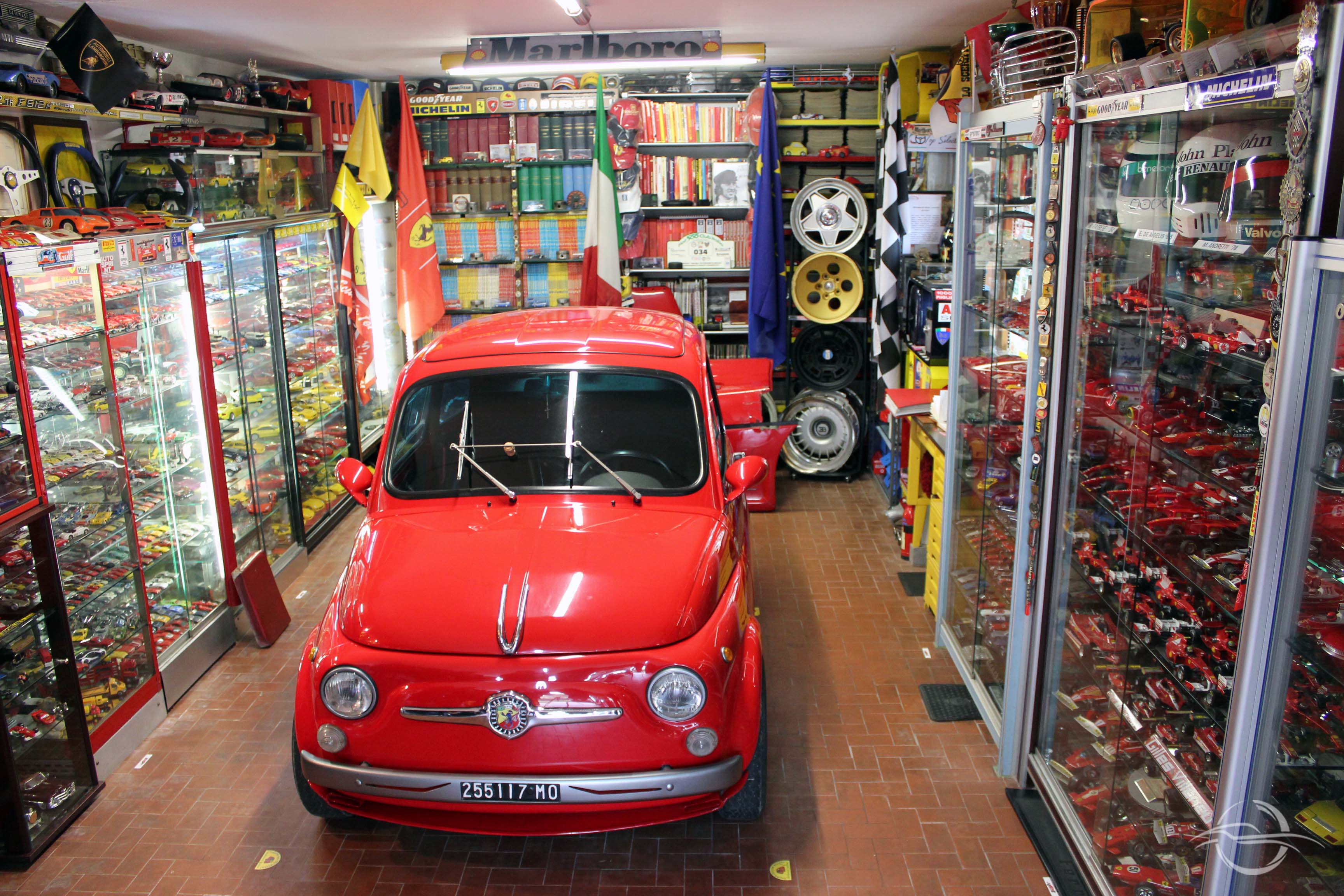 – I have my office at home. I modify the bodywork based on the original cars’ photographs which I take from the books. Because there aren’t scale models for all cars, so I modify them to recreate the original bodyworks. For example, I created the mudguards for this one, which weren’t in the original model, and I also re-made the nose. I created the right-hand drive for this one, I used the Testarossa as a base. Then I painted it. I created aluminium mudguards with aluminium sheet for this 290 Mille Miglia, then I glued it on as it cannot be soldered.
Mr Morselli created the bodywork even for the Fiat 500, that he shows us – I lowered it, I found the shell and I mounted on the small wheels of a Ferrari in scale 1:24. I used a Ferrari engine, I created the exhaust pipe and the spoiler… I lowered the roof, I created the windows, the skirts, the spoiler… I created the racing seats, the roll-bars, the fire extinguishers, the tail lights. 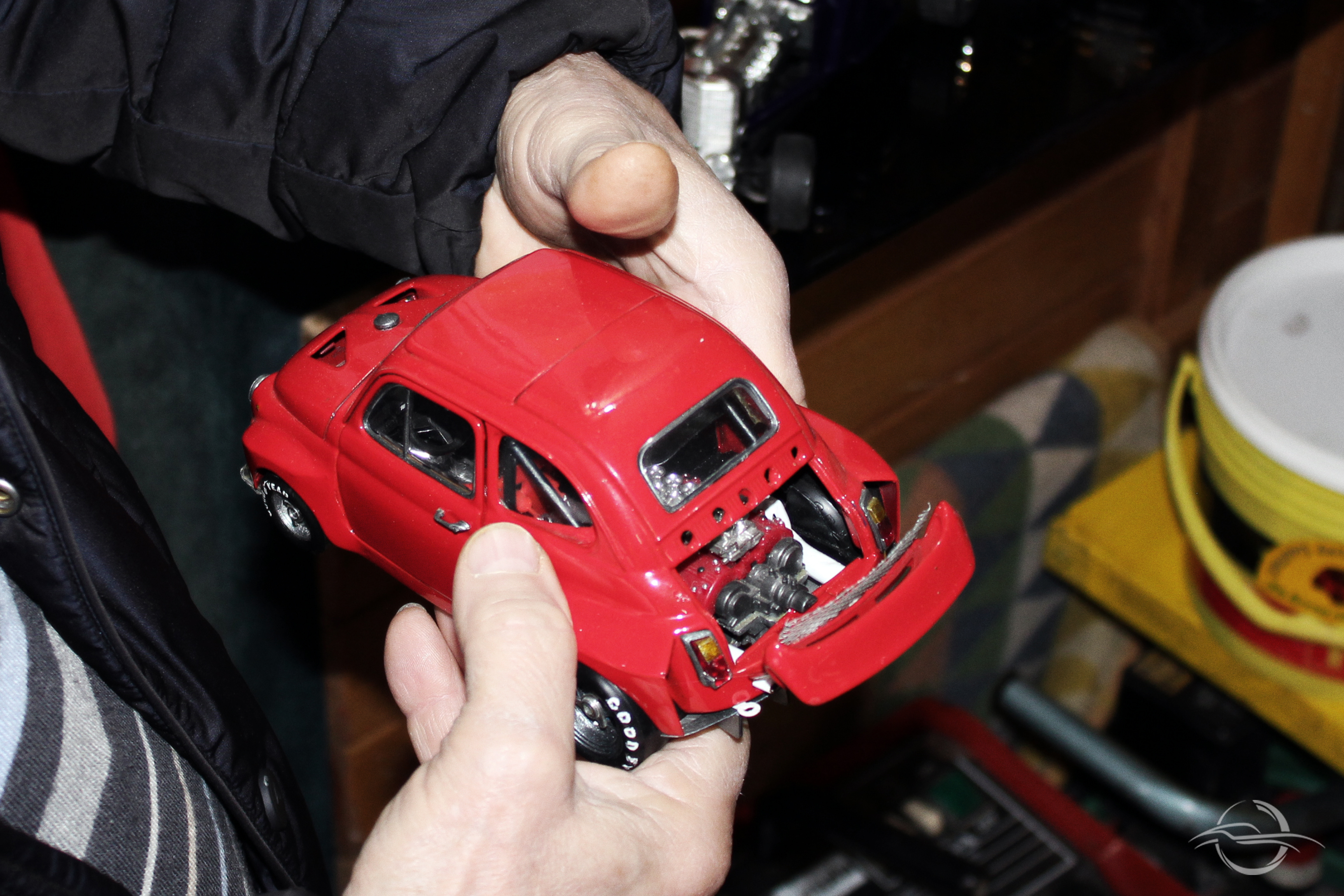 We discover the spare parts warehouse and the outlines of the metal sheets: they’re sorted in categories, filed in numerous drawers. 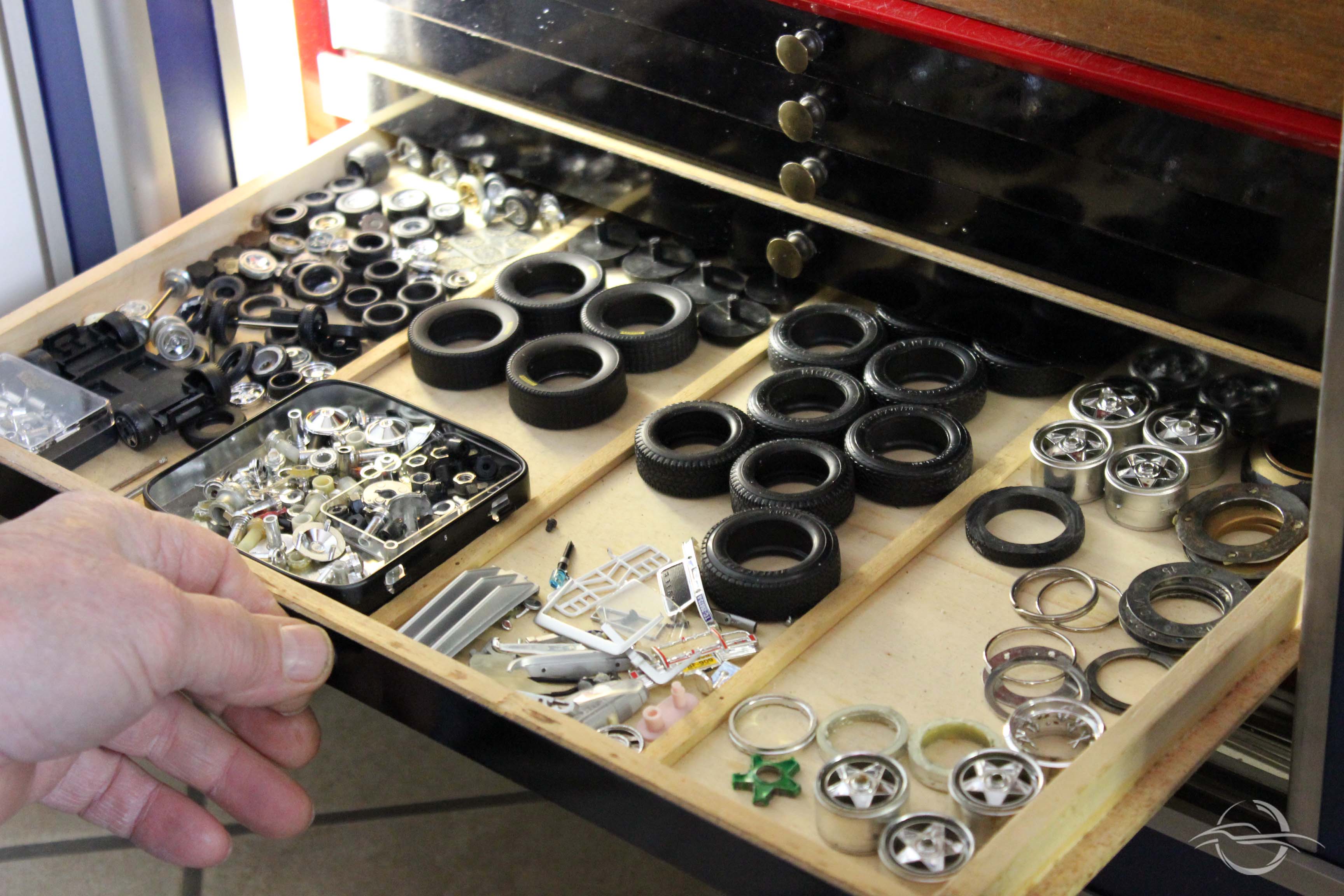 We get to the library with the magazines… amongst the signed caps, we discover Schumacher’s, Barrichello’s and Lauda’s. There is also the latter’s signed helmet and I discover that this is Samuele’s corner. 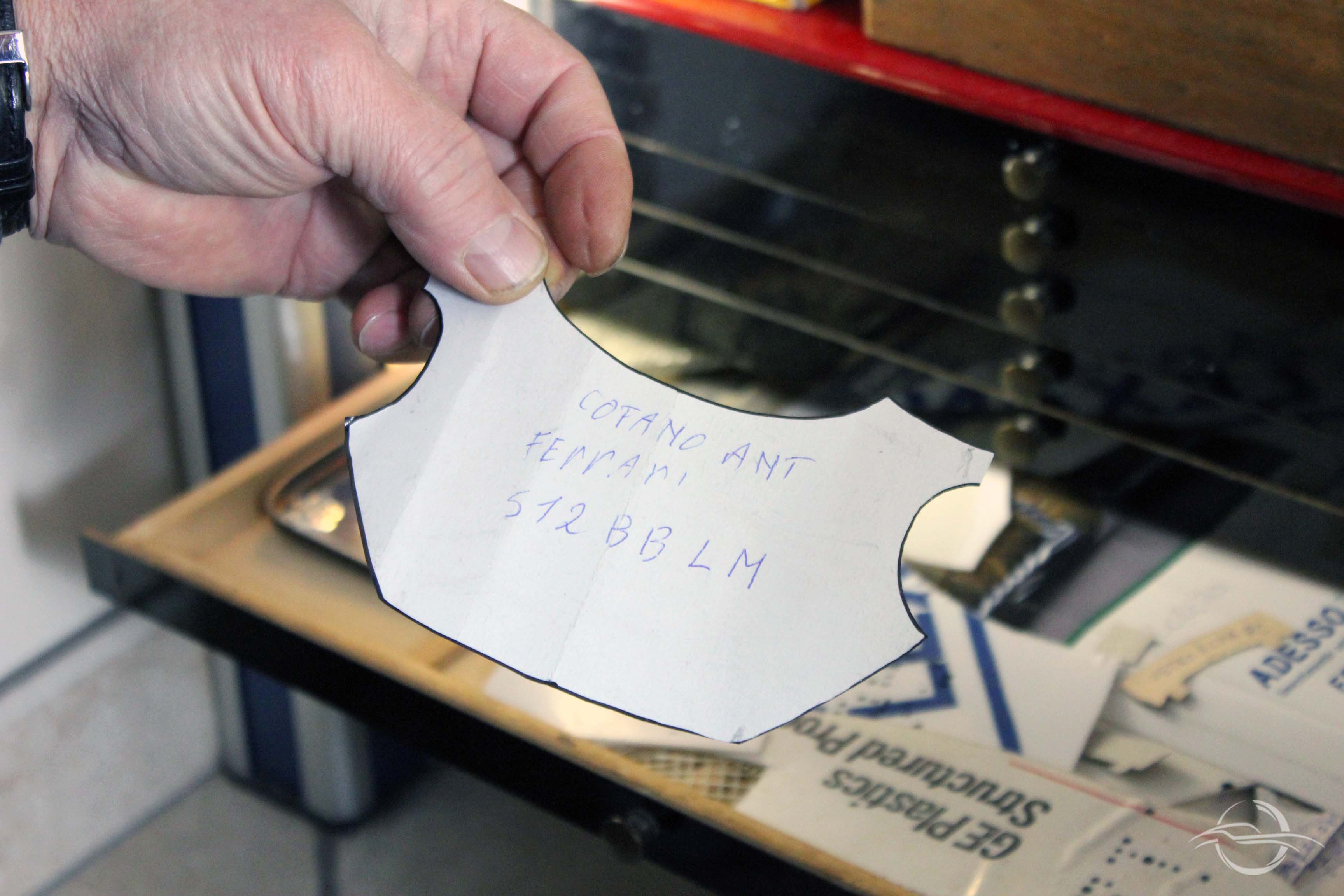 He also worked for thirty years for Autosport as a fitter. A chip off the old block and Samuele, Idris’s son, inherited the skill of expressing himself with tranquillity and while smiling, he tells us:
– These helmets are not real, they’re replicas that I make. I find it fun to do. Helmets have always been my passion, ever since I was a child when I dreamed to become a driver… Everything started with this one, which I found in a garage. I wanted to throw it away, but then, as I looked at it, I thought “you know, this helmet looks very much like the one of a 70’s driver, Jo Siffert, you only need to add two white lines and a cross” and that I did. And so I started thinking, if I make Siffert’s, I can also make Rodriguez’s! I started roaming around markets to find helmets in the right shape because that is essential. If you look at the photos for that helmet, the shape is always the same. My surprise is obvious, I don’t know about you, but I didn’t know that helmet replicas even existed. This kind of hobby requires an in-depth knowledge of F1 and drivers. You don’t simply need to see, but you need to observe and catch every individual detail. At the market, the key element which prevents you from making an erroneous purchase is knowledge.
Samuele explains that the helmets changed shape depending on the driver – There is a basic shape but, for example, Villeneuve’s had a narrower visor, so I had to wait until I found the right helmet.
– I was lucky enough that Niki signed this one. I had to make three of them in order to get it signed! One for me, one for Lauda and one for Andrè, my friend. He met Lauda. I wasn’t there. 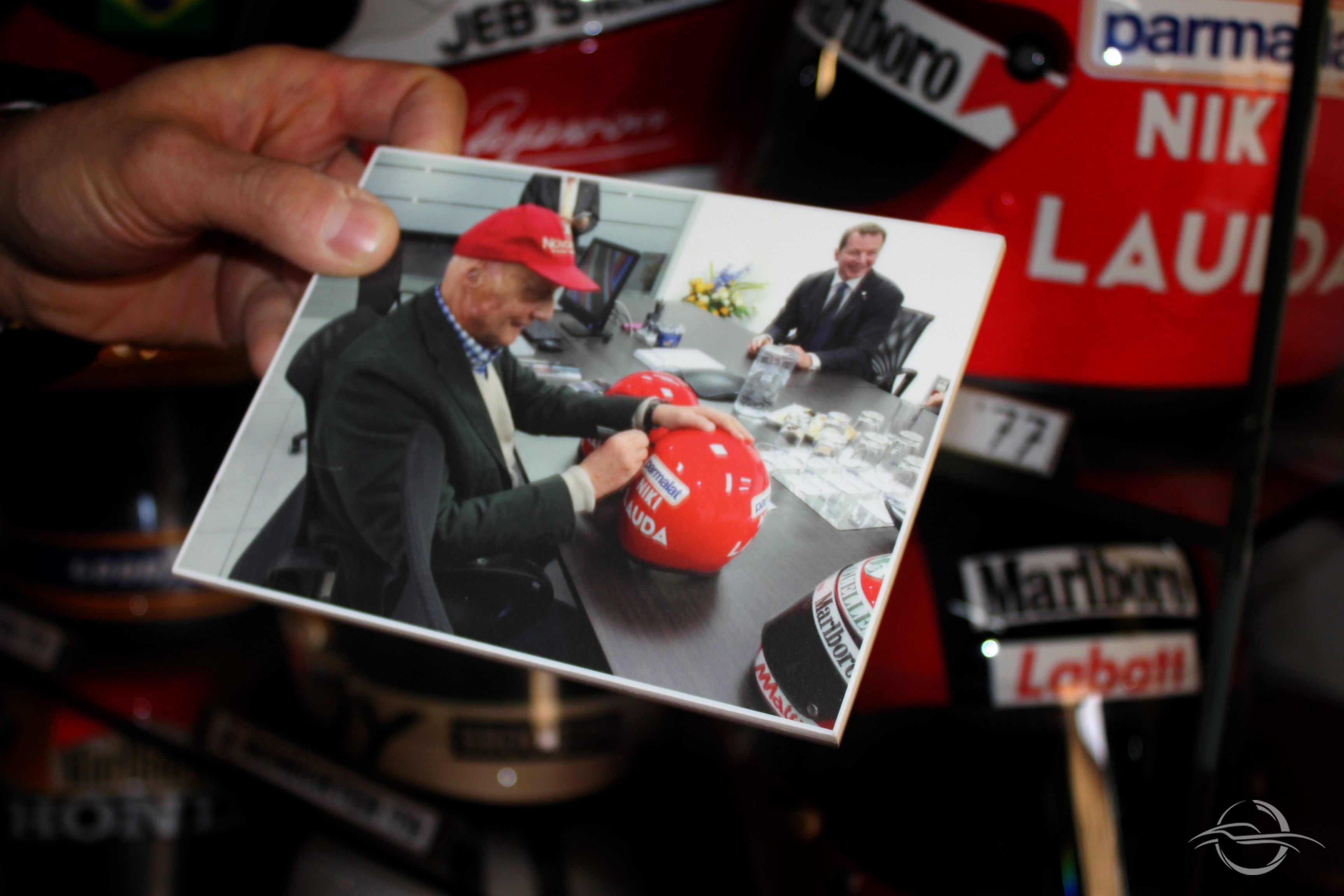 I get them at the market, they’re all destroyed, there is only the skull cap inside, and then I re-build them. I only look for those with the right shape, which were used from the ’60s to the ’80s. I don’t even look at the other ones, because today’s drivers cannot be recognised from their helmets, due to there being too many colours. This one is Steve McQueen’s. Samuele nods, and with this head gesture, he makes his admiration for the American actor and driver clear, an icon of a life lived to the edge, then he continues with his presentation: “This is De Angelis’s helmet and I practically made it. That shape is difficult to find because it’s an American helmet and I had to modify it with some resin. I make the inside, then I varnish it and I am very lucky to have a friend who makes all of the stickers for me, otherwise, without those, I wouldn’t even start in the first place.
I stop in front of a photograph of Gilles Villeneuve and searching for confirmation, I turn to Idris “your favourite driver?”. Actually, Gilles shares the wall with Tazio Nuvolari, but he’s sure of it – There are many, but the one who I liked the best was Villeneuve because he animated the races. He got everything and beyond out of the car. 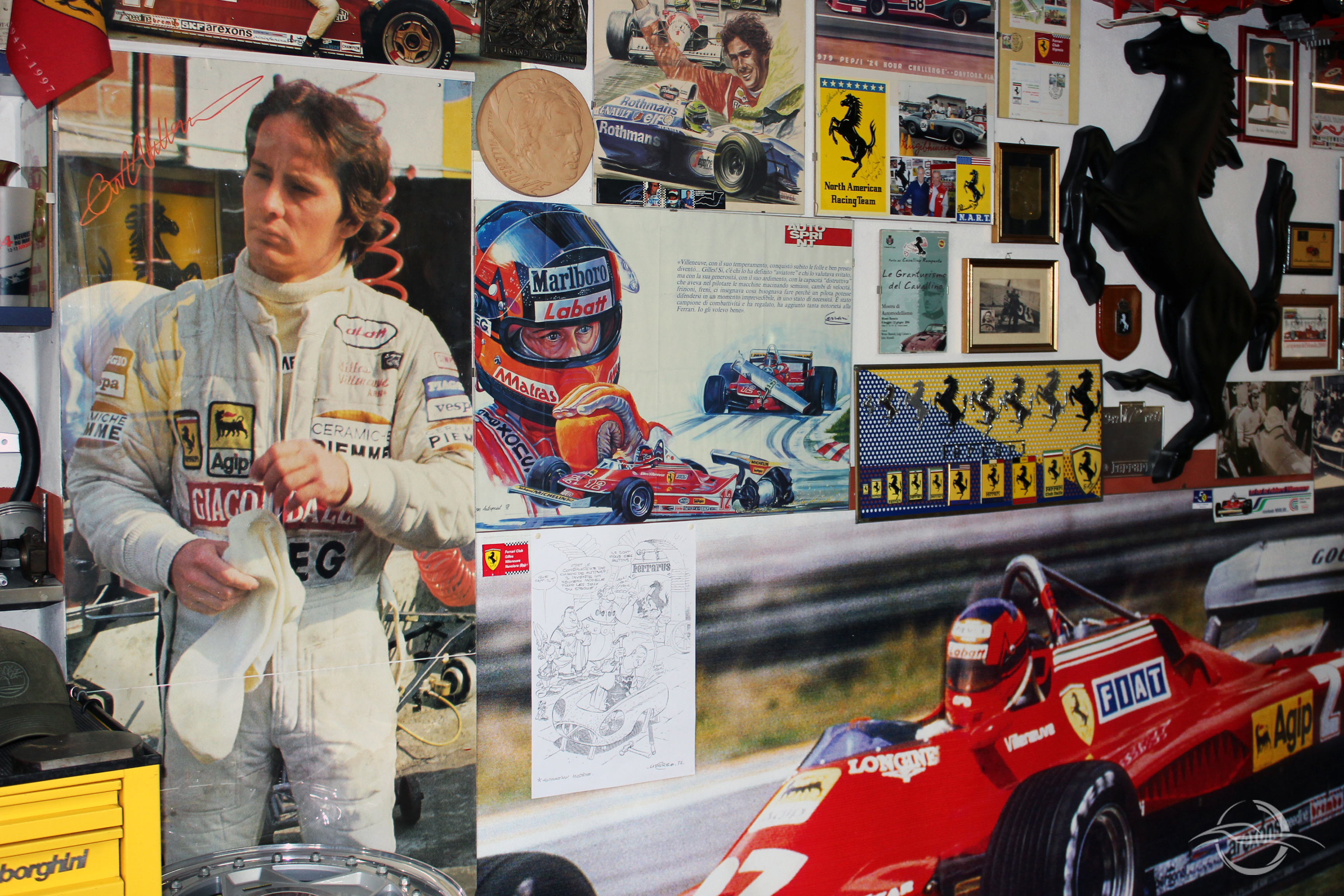 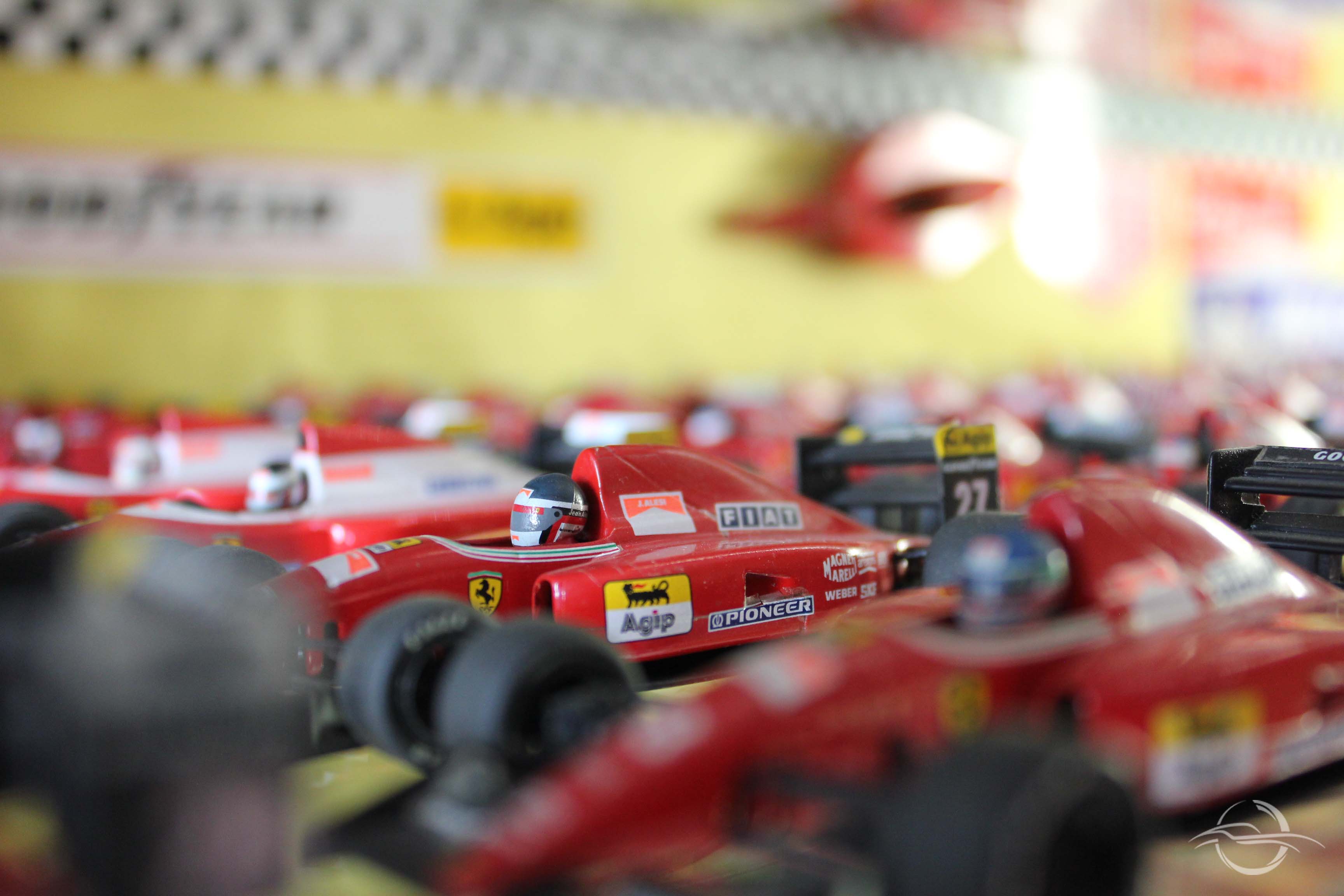 What is the rarest item? Samuele takes a bit of time before answering “maybe this Lamborghini model inside the dome”. A personal collection, where each individual item is a memory and, in my opinion, one of the happy ones, rarer things are measured with a value which we’re no longer interested in. In a historical setting, where we took often search for something outstanding, where many appear dissatisfied and bored with everything surrounding them, I wish to pay tribute to normality and thank Mr Idris for the very firm anchoring to the ground – I did everything I liked and, if I went back, I would like to be a panel beater once again and create the bodywork for my models!
It is a very cold day and Idris’s wife offers us a coffee… but first, I thank them for their hospitality and I have the honour of signing the Register of Presences. 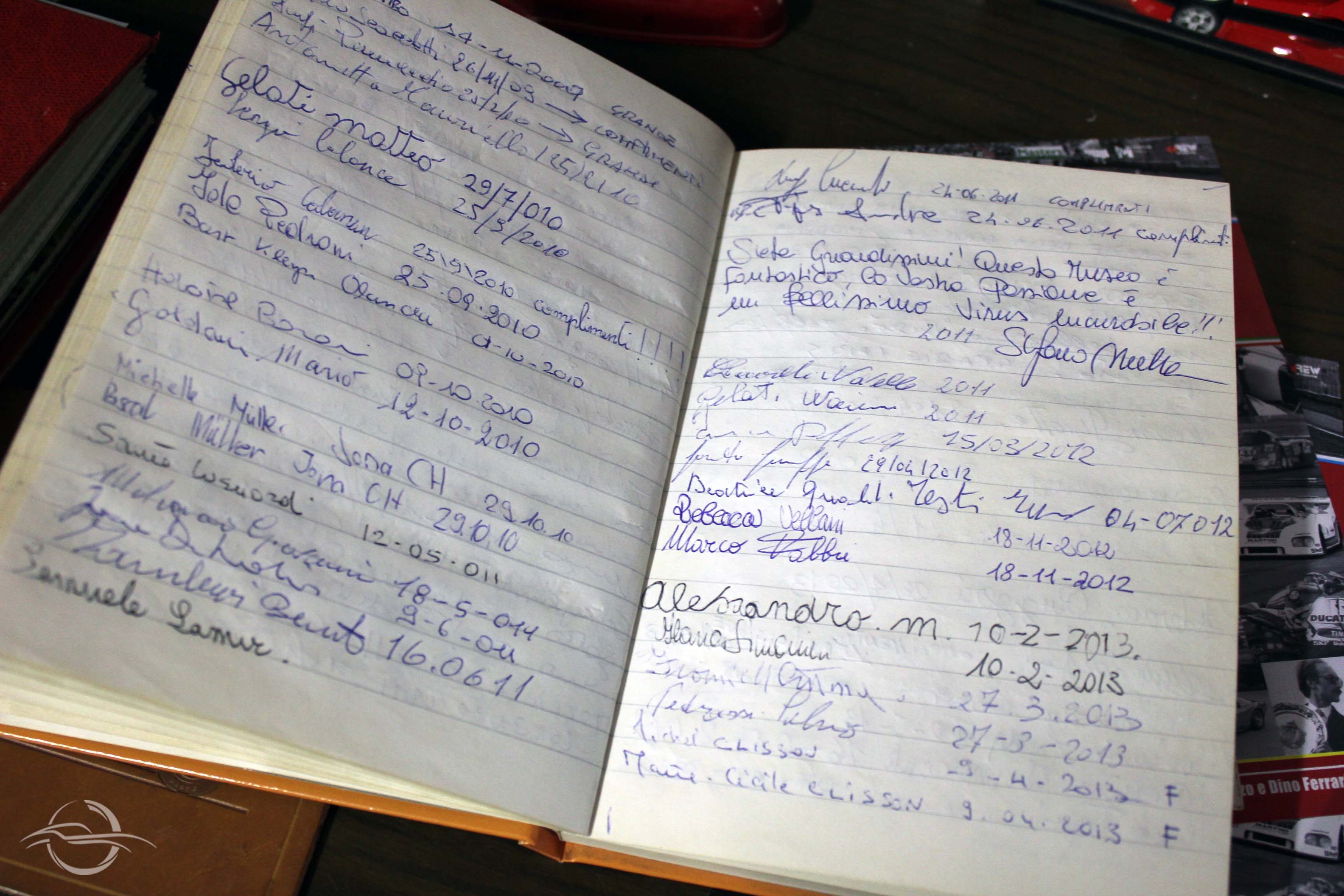 Tell me your story
Share on your Social!
Share with WhatsAppShare with FacebookShare with TwitterShare with LinkedIn