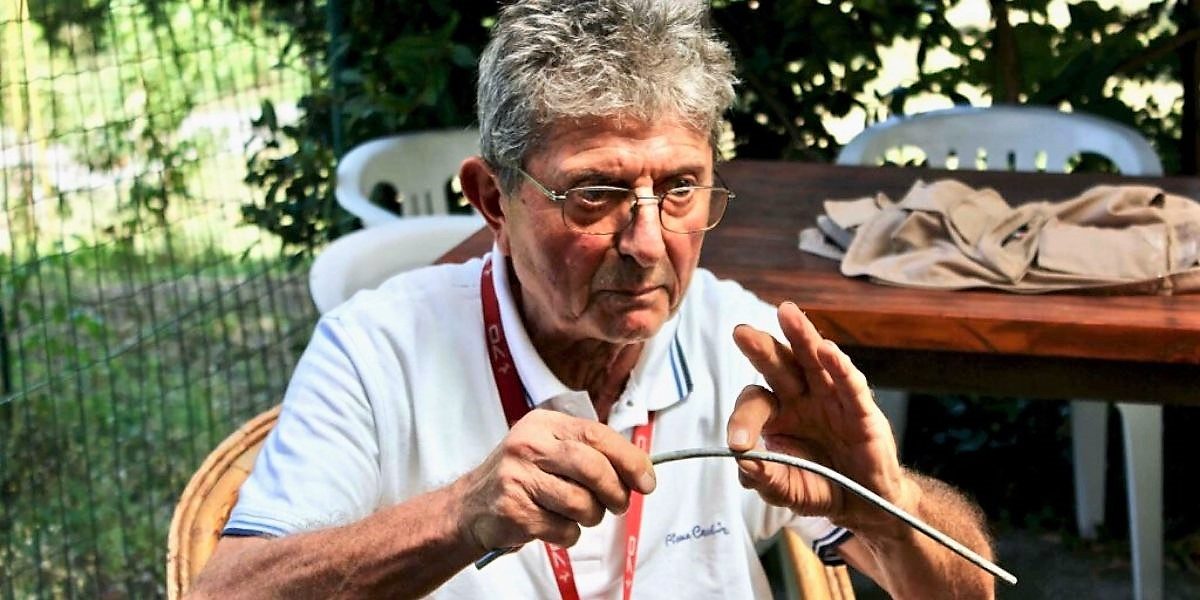 Scaglietti, a page of history

I ask Oscar to go back to the topic that will never stop fascinating me: the articulated gestation process that lead to the birth of a car. Oscar’s tale traces the profile of a choral story, with the car “in a nutshell” as a protagonist and which carries many protagonists on the stage.

– So, let’s go back to you telling me how a car was born. Can you summarise the different steps?

– To sum it up, the moments were three: prototype, homologation and start of manufacturing.

– The more I listen to you, the more I get the feeling that all three were very intense situations.

– They were indeed. Just like the birth of a child. In our case, the car was thought and drawn on paper first, then the model was created. Between studying the model on the table and having the car ready, with the registration plate in the client’s hands, there was the whole process of the testing.

That he, Oscar, liked very much. Just like the trips that took him to the other side of the planet. When I tell him that, he nods, smiling. 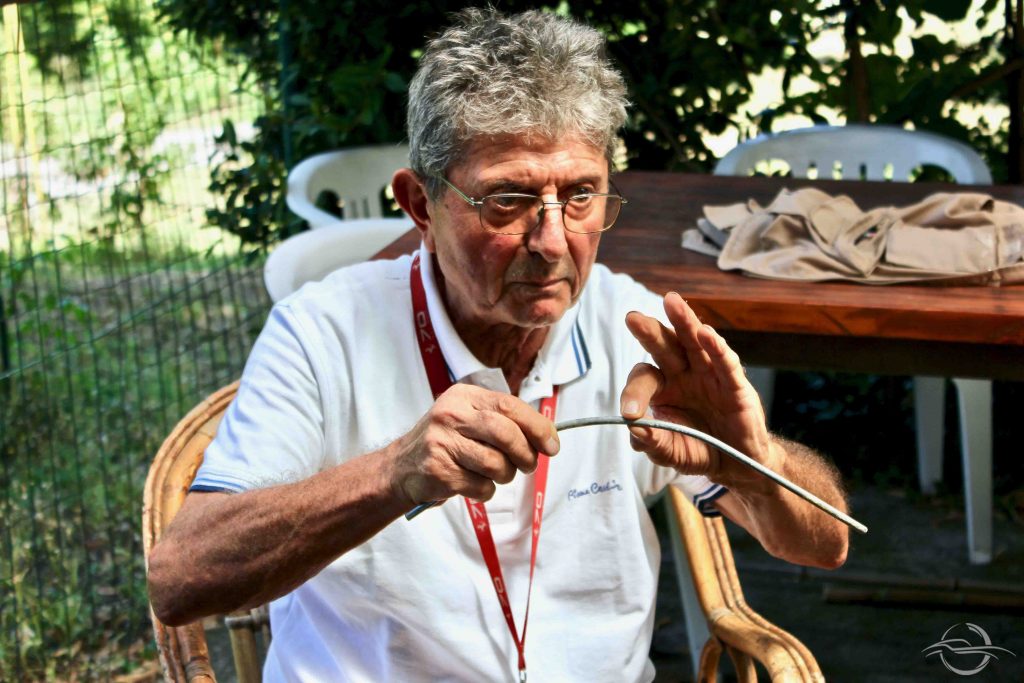 – When there was a motor show, either in Germany or in Geneva, or an event, I went with some of the collaborators… It was fair for them to see the work that they had done during the year. I wanted them to listen to the comments on the prototype, to observe the admiration of the people, charmed while looking at the car. It was a chance to grow and they put even more effort in doing their job in the best way, also because I was standing right behind them, jokingly threatening them.

– Really? What did you tell them?

– Something like “Hey, be careful because if you don’t do a good job you won’t come to Paris with me!”

– You should have seen them, how they put their heads down to work hard. The method has always worked. And deep down, I must have had some good methods because they’re all colleagues who even today, despite me having been retired for years, continue to call me to say hello. Or with whom, once in a while, I meet up for a dinner out.

– Well, I get the impression that you have been one who joked a lot too, haven’t you?

– Yes, that’s true. I worked hard, but I was always ready for a joke. One day I took a Ferrari 288 GTO Pininfarina prototype to the factory and I called Sergio, Fioravanti and the whole of the staff. “Now we’ll do a nice game”, I said, and I stood with my feet on the bonnet, then on the roof and on the boot. I walked back and forth excitedly while laughing. They were all looking at me open-mouthed, thinking that I had gone mad and they shouted at me “Hey! What are you doing? Stop! Get off there or you will break it!”

– And why were you so relaxed?

– Because I knew I couldn’t ruin it: Kevlar and carbonium compounds had been used to build the car, which means that the shell was lighter but also very resistant. The frame was still in steel tube, but with panels in composite to remove torsions and flexions. It truly was a huge novelty.

– Talking about prototypes, Scaglietti made one too, was it manufactured?

– The base for the prototype was a Ferrari 2+2 Spider. Dad had chosen the spider because it has always been the most difficult car to manufacture, due to the torsion problems. This model was also the precursor for future projects, such as the F50 and the Enzo.

– How did you create the product?

– We made it in marine wood plywood, with the thickness reflecting honeycomb. A group of mechanics from Ferrari Experience studied the general plant design, that is, the passages of petrol tubes, air tubes and all of the mobile mechanic parts. We didn’t want to pierce the honeycomb to get tubes or electrical cables through, because we would have weakened the structure. The “experience” department made all of the mechanics of a 2+2 available too. Whereas, as a body shop, we studied the anchoring of the metal structures on the wooden frame. 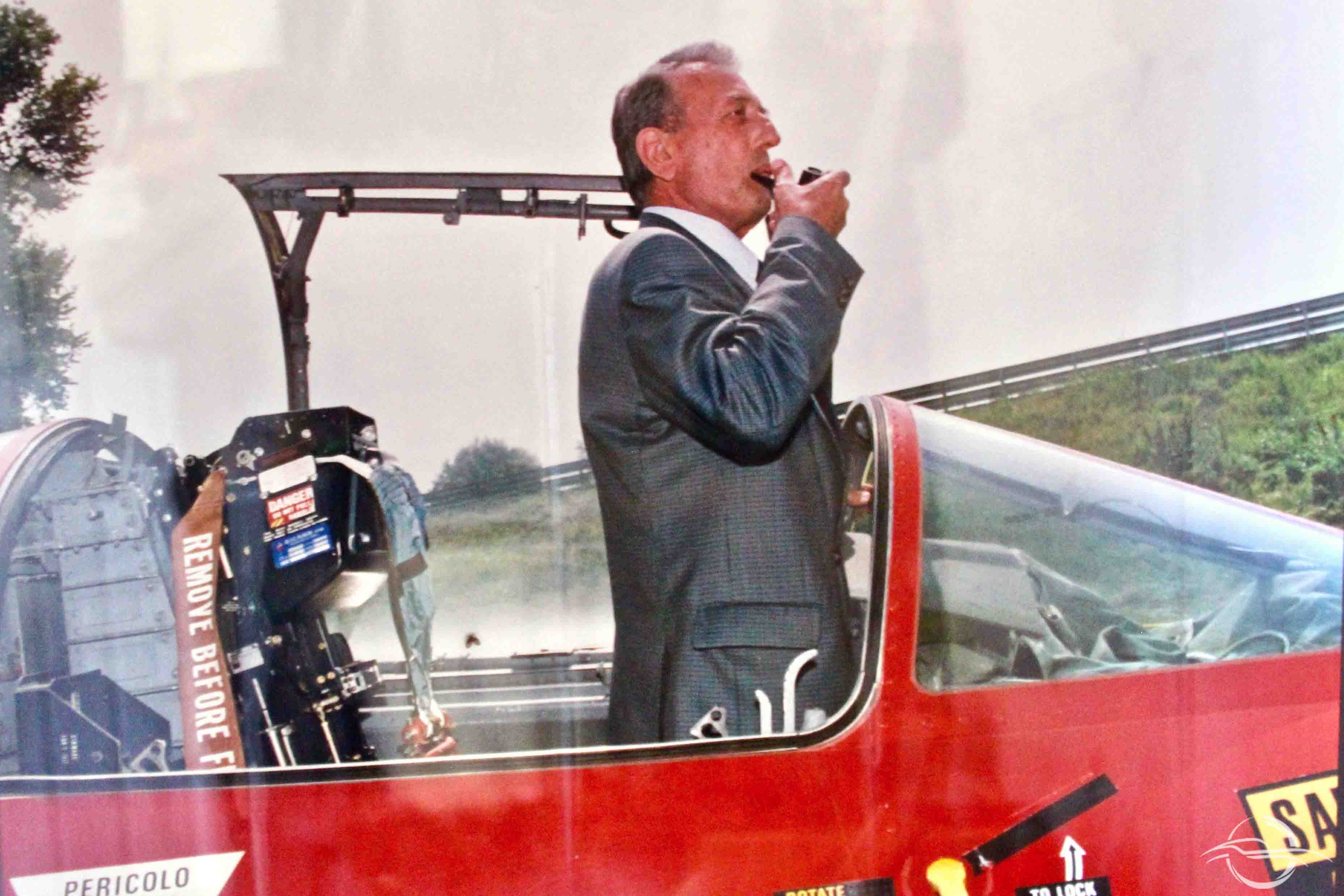 – Did Sergio participate in the project?

– Yes, my father personally participated in it. Then there was myself, I followed the construction of the wooden frame and the creation of the model for the mould and the composite frame. Our goal was creating the “perfect” frame, which already included all of the ornaments and furnishings for the mechanics. It was a quite long job. First, we prepared the frame in 1:1 scale, and we mounted all of the mechanical organs on it, as well as the supports for the cabin’s safety, the supports for safety belts, seats, all of those things which had to be created and be subjected to traction and impact.

– It sounds like a huge job. Who helped you?

– It sounds like a huge job. Who helped you?

– We worked in three different groups: body shop mechanics, mechanics and homologates. We covered the frame with 4 millimetre steel sheets: they were all flanged and modular, so that we could disassemble them after curing the composites. We created the female mould based on the wooden model: it was quite cheap because we only needed to create one or two pieces. We were concerned about the dilation joints thermal dilation, a problem which we had to elaborate on and research. With heat, the steel model’s size increased, we needed to calculate the shrinkage of the cold piece. I admit that it wasn’t so straight-forward. I mean, everything we studied, discovered, applied, improved over the course of the years is something that we find in modern cars. Some characteristics of this 1974/75 prototype are seen projected onto the F50.

– Yes, the F50 is an engineering masterpiece. Nobody had ever assembled a car with such precision, then it was replicated by Bugatti, Pagani, and the others… just like with the Ferrari 250 LM, we were the very first!

In this case, I realise that by “us”, Oscar means Ferrari. He says that with a pride that clearly talks about how he felt like an actual member of that company. 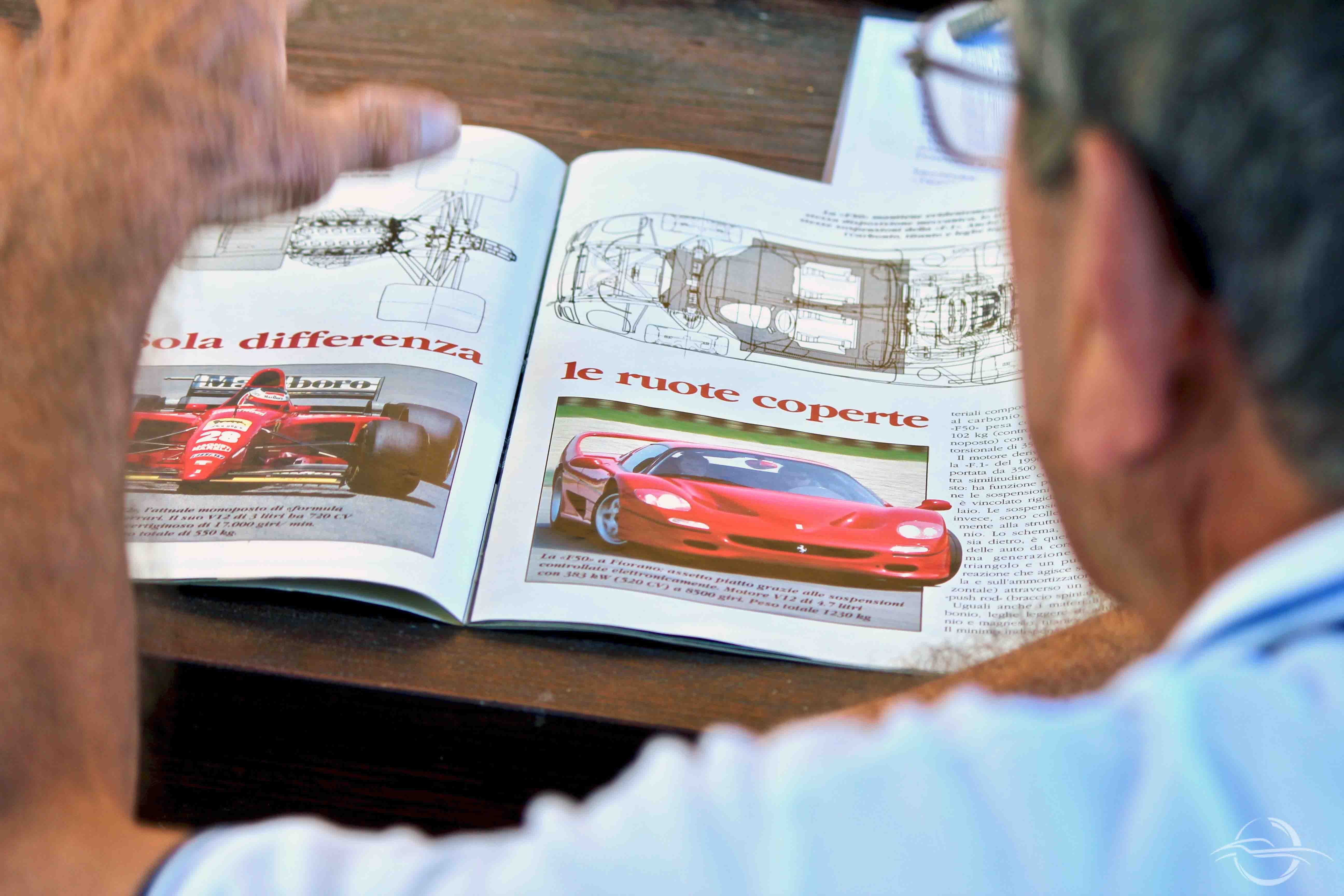 – Why do you think that the F50 was left in the shade and it didn’t become an icon like the F40?

– Because the F40 was the first car able to combine the features of a road car, with the materials and technology of a racing car. From the construction point of view, the F40 and the F50 are completely different. The F40 had the cage, the structure of the cars from the past, which was eliminated in the F50. From the first to the second, there was a huge technological step forward, which we find again in the Enzo, but the first became the dream of many. Ferrari made the choice with all three cars, to crank out few cars, with limited numbers. If they had made more, that would have forced them to perform research, because when you create more series you study and implement improvements.

– Going back to your prototype, in the end was it put into production or not?

– Ferrari had assigned my father a test driver with a long-standing experience. They left mid-week and they went to the seaside to see Afro Gibellini. They performed all of the tests, they drove on mountain roads, plain roads… they combined road testing with some pleasant food and wine visits.
In the end, a car was born out of it, but it was neither nice nor ugly, it was somewhat anonymous. Aesthetically speaking, it had no grid, the purpose of the project was studying and functionality. I may say that it was a pleasant spider that drove around anonymously, with no honour nor glory, and which drove for many kilometres.

– Therefore, in the end, you decided not to go beyond the prototype stage…

– Yes, it remained a prototype, but we established that we could use that technology to make any kind of spider or saloon car, we could build all of the parts and work them even miles apart, with mechanical tolerances calculated to perfection. 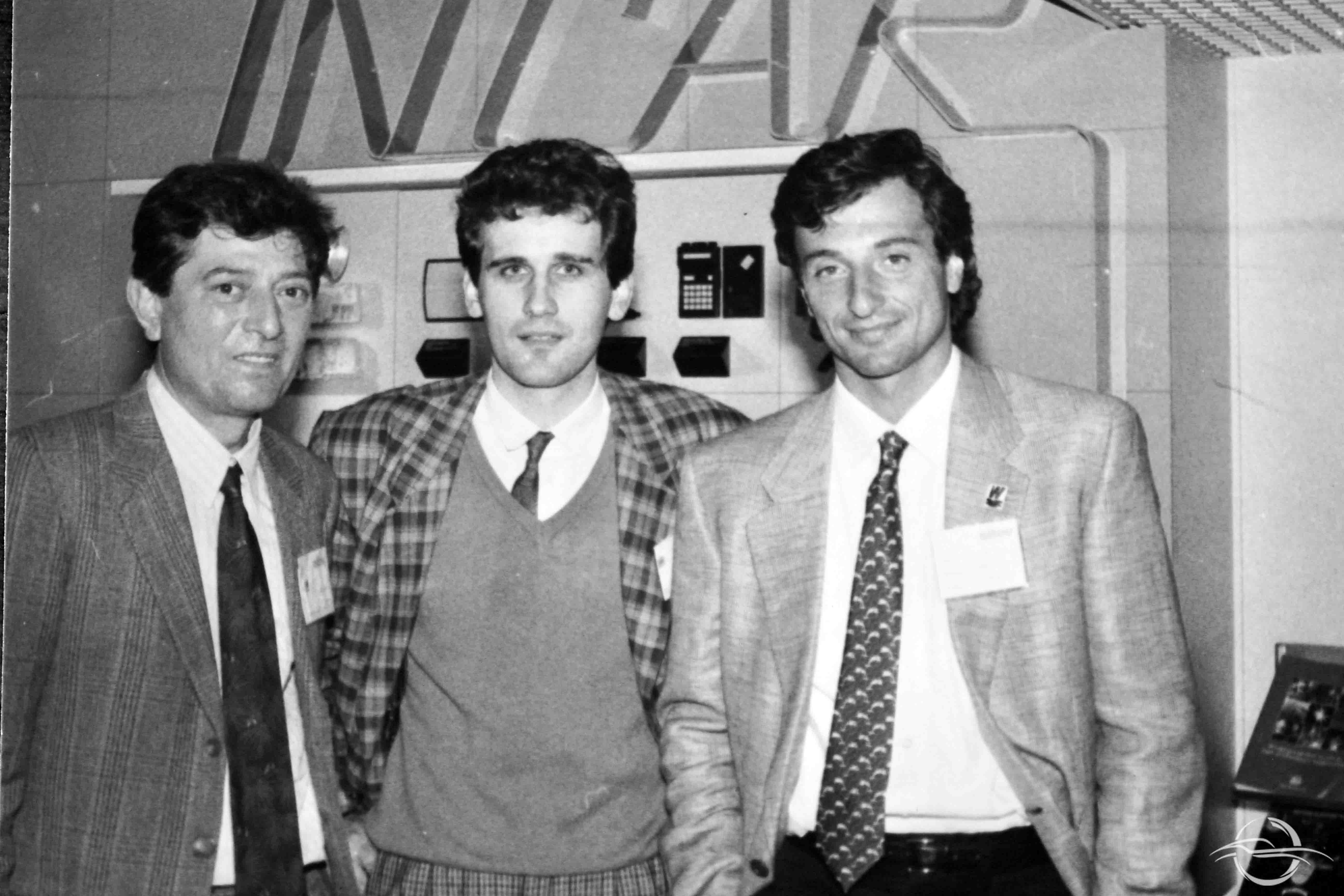 Now I’ve lost track of the hours and I don’t know how long we’ve been here, chatting. There is a watermark behind Oscar’s words, often the omnipresent figure of Sergio (which is how the son keeps referring to him as) is profiled. The father is hardly ever mentioned as such. Once again, I decide to move the spotlight on him, Oscar, to conclude this tale – which is the epopee of a whole era – as “his” story. The flair, likeability, attentive curiosity and love which emerge from each one of his words, deserve to be highlighted.

– You’ve seen many Ferrari’s. Which one do you believe was the least beautiful?

– The one that I liked the least was the Ferrari Dino GT4, bearing Bertone’s signature: I don’t want to mince with my words, I think it is unsightly. And I didn’t like the “Gobbone” either, that is, the 365 GTC4.

– And which Ferrari would you like to have in your garage?

– The Ferrari Dino! That is a bijoux: with its perfect proportions, its shapes and its beauty. But I confess that I’d like to have a different one in my garage every day… just to keep my feet on the ground! For example, I really like the long wheel-based Ferrari California: it’s the best proportioned out of all, it’s simple and yet beautiful.

– And of course, you would like it in red.
– No, not necessarily. It was nice in green too, with the beige grain leather interiors. I would like to have it, even though, once in a while the folding hood went up transversely and it was a hassle! 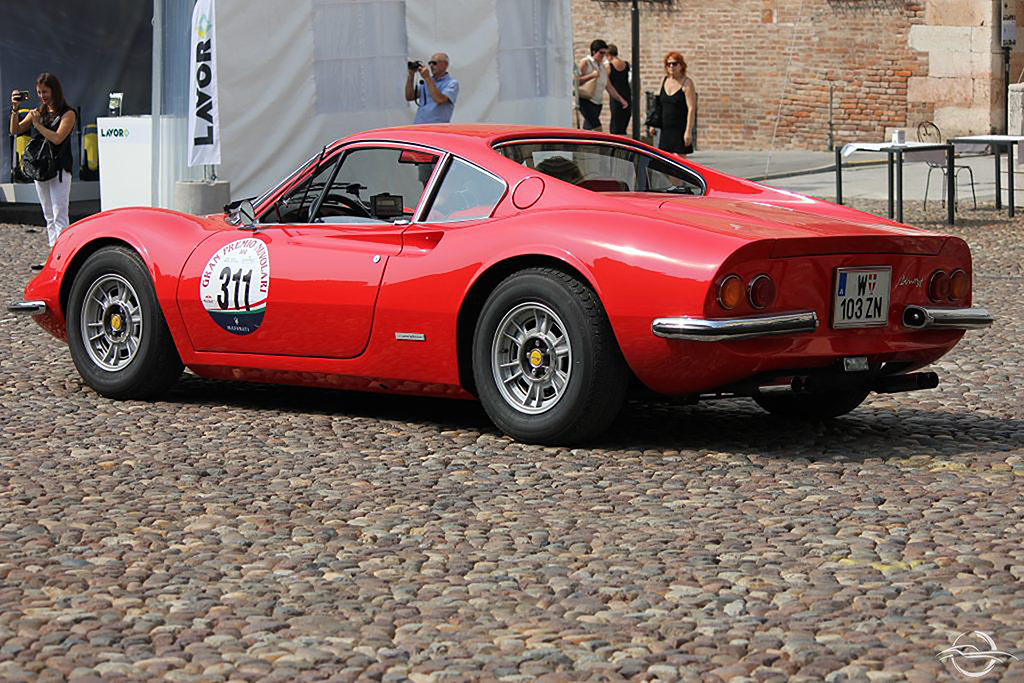 – With all of your experience, you will have been called to act as judge?

– Yes, it happens. For example, I was invited by Sergio Marchionne to attend Ferrari’s seventieth birthday party. I have to confess that I awarded a Boano, even if there was a Barchetta Scaglietti in the context… the Boano was original and “wholesome”!

– Congratulation for your impartiality, it demonstrates your honest spirit!

– In Palm Beach, in the USA, I also awarded a Vignale to the detriment of a Scaglietti. The car had always belonged to the same family, from father to son, I awarded loyalty.

– Thinking about the United States, have you ever been to Pebble Beach?

– No, I have never been there, I have been invited on many occasions, but I can’t go there in August. Should I deprive my wife from going to Cesenatico, so that I can go to Pebble Beach? That’s a joke! 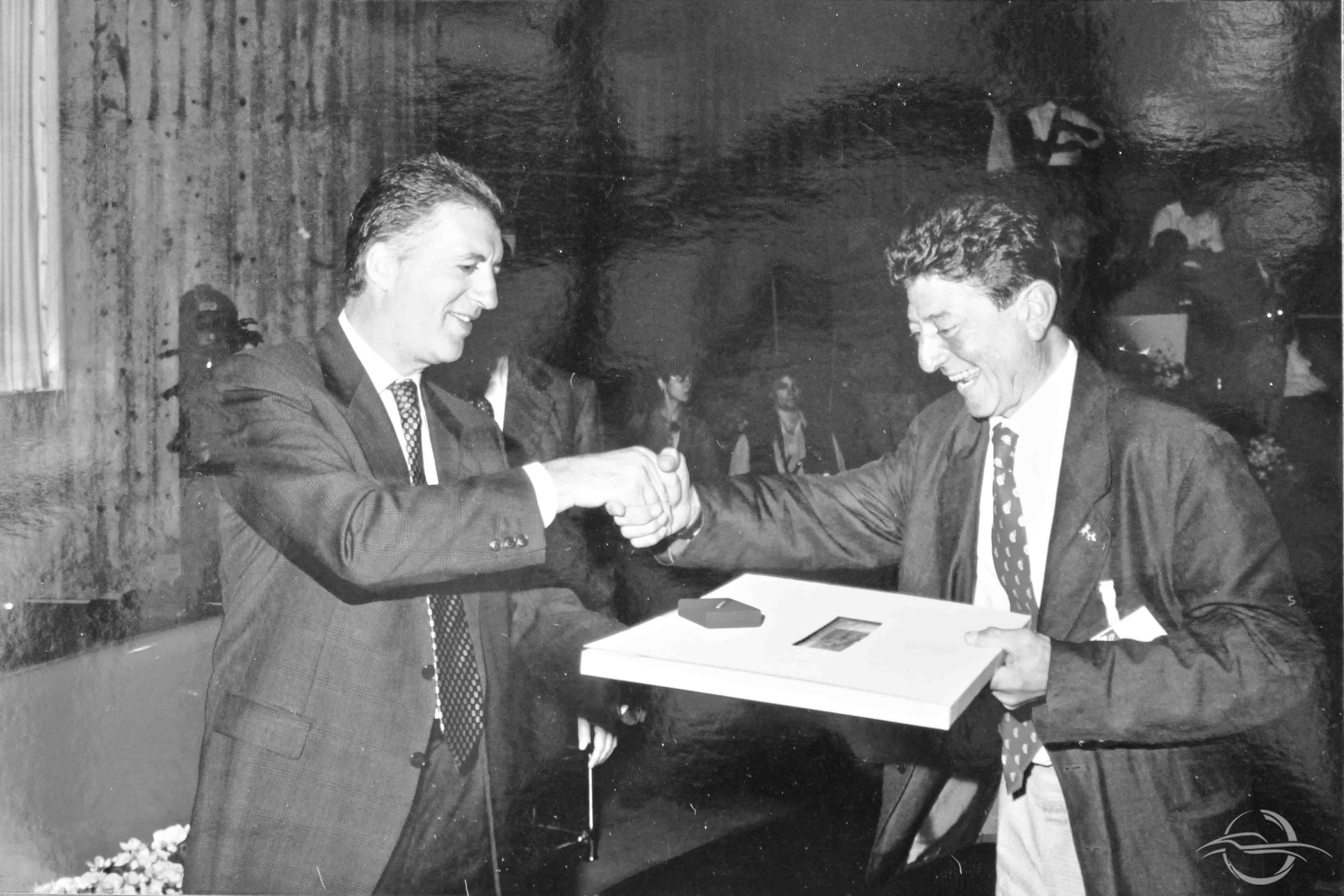 – Oscar, you have an admirable experience. I’d listen to you talking forever, but the time to say goodbye has come. Please tell me, which adjective would you use to define yourself?

– “Genius and audacity”, I often used to rack my brains to bring out respectful solutions aimed at improvement, but I was also able to do stupid things, some actual rubbish which I wouldn’t normally do. I would realise about it at a later stage, as the dust settled.