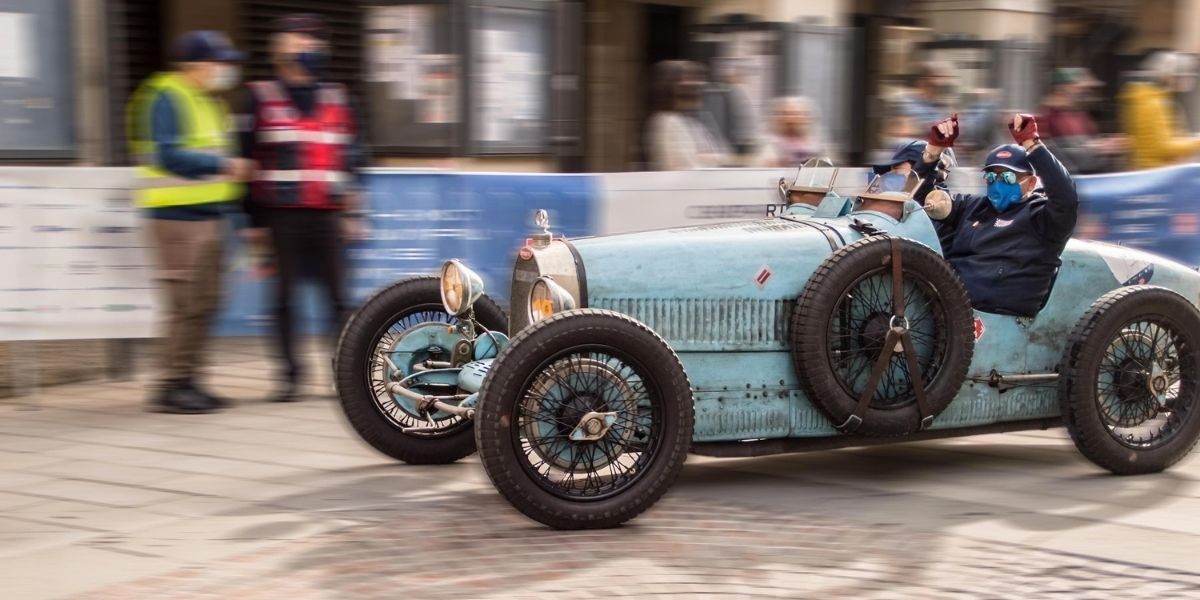 Would giving up have been fair?

According to the American professor and researcher, “you may choose courage or comfort, but you cannot have both”. On 22nd October, with the warm and comforting autumn colours as a backdrop, as well as a good dose of bravery, the 356 crews left for the most beautiful race in the world from the usual stage in Viale Venezia, Brescia.

Only cars constructed prior to 1957 may participate in this regularity race, which is the year of the Mille Miglia’s last edition. In this thirty-eighth edition, some crews, in particular those coming from extra-European countries, had to renounce the race due to the pandemic. The list of the competitors and the final rank are, unusually, characterised by the larger presence of Italian and European crews.

Safety is the key in this 38th edition, even to the detriment of the enthusiasm and that frenzy which has been preparing the souls of drivers, co-drivers, organisers and public from the sport and technical verifications at Brixia-Expo. Perversely, the noise, screams and laughs were missing, everything took place in composure and quietness. This incredible 2020 year is a masked year, and the accesses are with fixed quotas.

They set up the Villaggio in Piazza Vittoria, which saw the parade of the cars, but without stopping… in compliance with the anti-Covid-19 regulations.

It couldn’t be the usual Mille Miglia, not in this twenty-twenty. It didn’t go without criticism due to the gatherings and hidden dangers of this invisible presence “the coronavirus”. The choice implies a strong responsibility, for the relevant consequences for everybody. Each one of us chooses which burdens to carry and there will always be those who are favourable and others who are totally against it.

The organisers mention Jim Morrison’s words, the leader of The Doors: “those who renounce their dreams are destined to die”. The Freccia Rossa doesn’t want to give up, whatever the reason, from the most noble to the most material one… and this edition is full of meaning: the Mille Miglia as an expression of the Italy which takes off again, committed to going back to reality. With the motto “distant but yet united”, the Mille Miglia dedicated this 38th edition to the city of Brescia and to its citizens.

The nicest race in the world concretely contributes to the discovery of artistic, cultural, gastronomic scenarios of the beautiful Italy. Four stops, from Brescia to Cervia, from Cervia to Rome, from Rome to Parma and then back again to Brescia. Following the “Freccia Ross”, we learn to get to know new places. In the proximity of the most famous stops – Verona, Roma, Parma, Salsomaggiore, Castell’Arquato… there are towns which still bear the signs of the 2016 earthquake, whose symbol was Amatrice.

Do you know Pandino and its viscount castle? Excluding residents and neighbours… it’s a place from other times, where the anti-covid-19 rules were made respected to the letter, or at least, they tried to. Italy is different from any other place not only due to its beauties, but also because Italians can be involving, fun-loving, cordial… they can surprise you with small gestures: not paying for a coffee because it was already cold, this happened in Pandino.

The race isn’t only connected to the great impact on tourism, but the “Freccia Rossa” is the engine of a very prestigious craftmanship which includes hundreds of mechanic workshops, bodyshops and upholsterers which take care of the maintenance of classic cars or their restorations.

The public, in some stretches of the journey, made its presence missed due to the autumn season and for fear of the virus. The public makes the difference, those who admire the travelling music from the side of the streets on its path, are actual participants in the race. Some are only curious, others are actual enthusiasts… their looks, waves, photographs all motivate the crews.

We’re sorry for those who complained about “their freedom being restricted to seeing wealth show-offs sitting on a Ferrari”, but the children still want to see and hear the rumble of the Prancing Horse. The key rule in the vanity game is to be at least in two… and the Mille Miglia is about vanity on one side and the will to dream on the other.

An edition which has put the crews in difficulty due to the lack of spring light and the unforgiving weather in the third stretch, Rome to Parma. Specifically, while crossing the Cisa Pass, which took place in the dark and with fog. Out of the 356 cars at departure, only 296 cut the finishing line.

Over 1,700 km through 245 Italian towns, the precise driving hours are unknown, but no less than 45. On the podium we have Roberto and Andrea Vesco, father and son, driving a 1929 Alfa Romeo 6C 1750 GS Zagato, the Team Villa Trasqua, with number 46. The second position was conquered by Sergio Sisti and Anna Gualandi, driving a 1929 Lancia Lambda Spider Casaro, number 45. The third place went to Gianmaria Fontanella and Anna Maria Covelli, also on a 1927 Lancia Lambda Casaro series VII, with number 28.

Silvia Marini and Francesca Ruggeri won the “Coppa delle Dame”, the first all-female crew that finished the Mille Miglia with an excellent 24th place, driving a 1929 Bugatti T40 del 1929, racing with number 43. You can view the final ranking at the following link.

TUTTI HANNO UNA STORIA, RACCONTACI LA TUA!
Share on your Social!
Share with WhatsAppShare with FacebookShare with TwitterShare with LinkedIn