The Master of Monza racetrack – Chapter 3 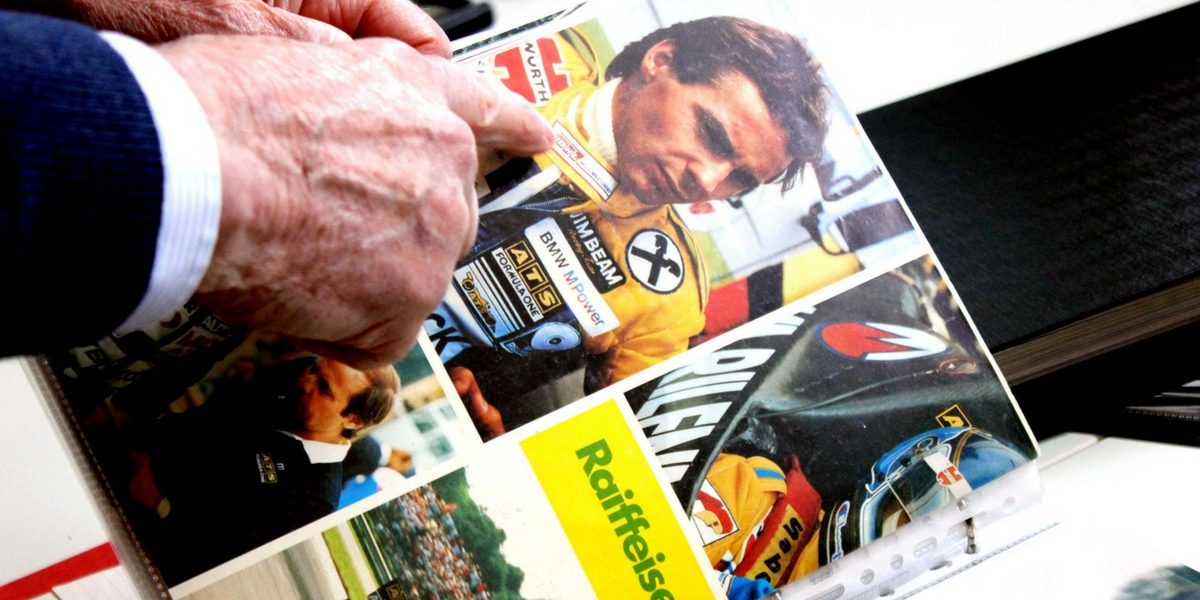 – Okay. However, shall we talk about the bookshop now? How was the idea conceived?
–The idea was born when LEA (Editrice dell’Automobile in Roma) shut down the shop which they had in Via Hoepli. Giorgio Nada – who was their representative – bought everything, including the stock of books. So I told him: “Come on, come to Monza!” That was the beginning of the bookshop. Then, when Nada tired, my wife and I bought everything. 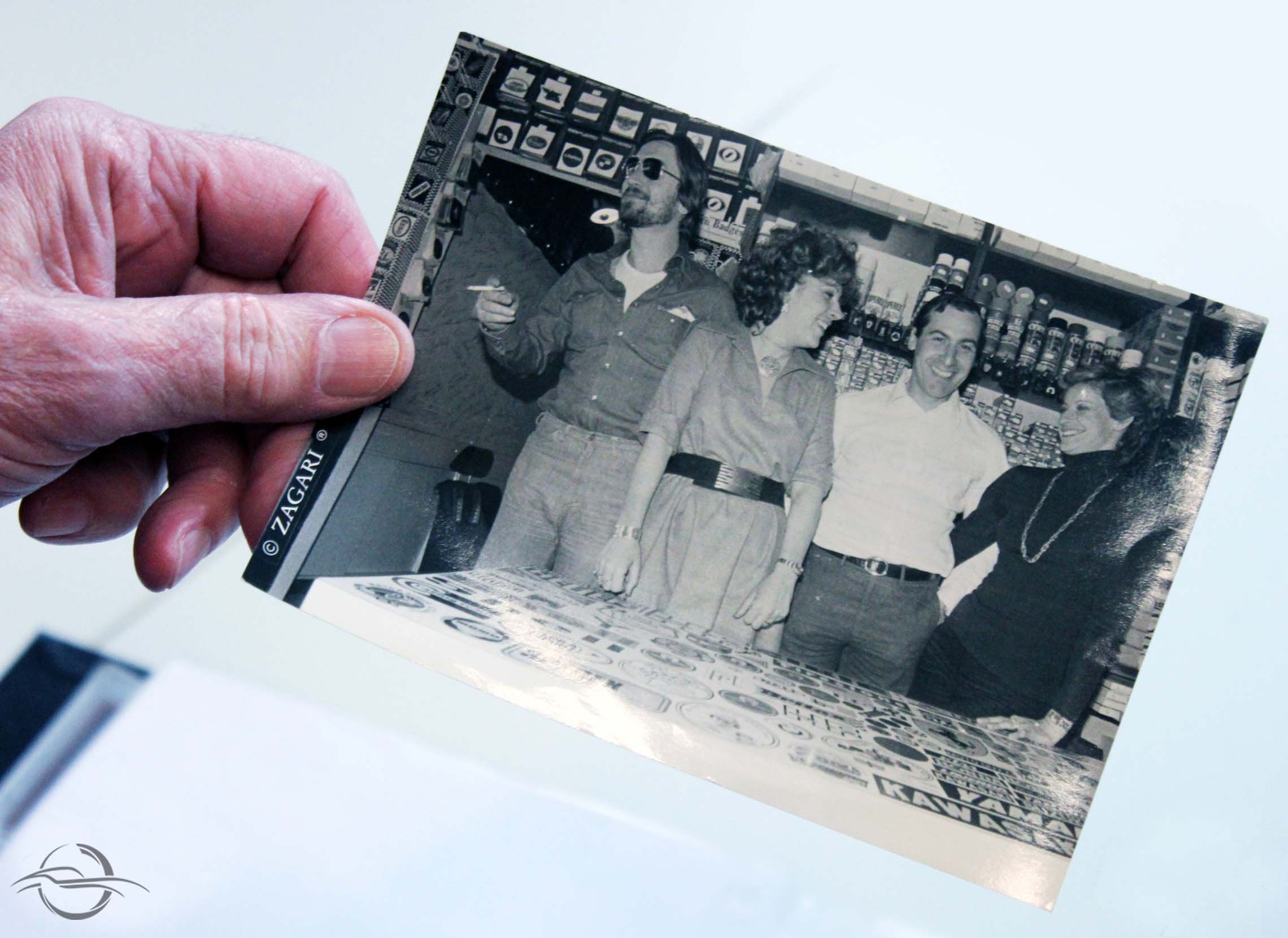 – You were very forward-thinking to create a business on memorabilia!
–I was the very first to sell such things. My wife and I started to bring a few things to the first Motor Show in Bologna or the first Rétromobile in Paris. That’s how it worked… people came to us and told us: “Well, I have some stuff: are you interested?” So I started to buy old books, photographs, items… and for years, both in Paris and at the Motor Show – where the market was completely different – I was the only one to do that. I had no competitors. I bought and sold a lot. And I made a lot of money too. Then the others came, who all learned from me. I’m also very venal: when a driver donated his helmet to me, I used to sell it straight away!
He says that while he’s laughing, and I’m wondering to what extent that is actually true. To what extent a person who even today – aged 78 – oozes life and creativity from every pore may be truly “materialistic”. 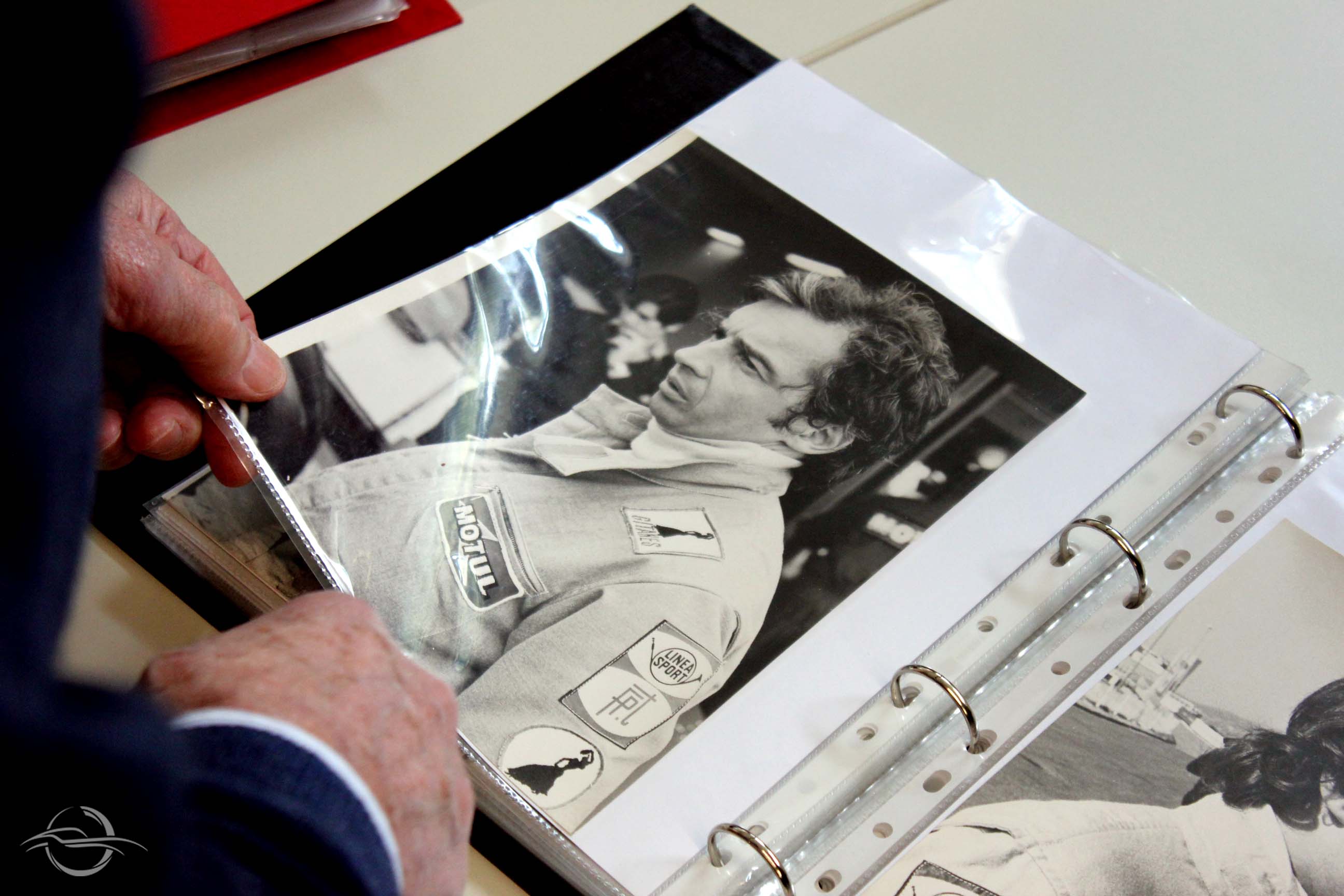 – Besides venality, this is a job which requires passion. Does being such a book expert mean reading them too, or does it only involve collecting them?
– Look, in my case, I based myself a lot on photographs. I studied them carefully. Maybe they launched a book on Ferrari, I knew that someone had one which had been photographed somewhere, I remembered it and I contacted him to sell the book to him. Then I also collected data, such as chassis numbers… which were all things which I could use later with my clients. I mean, everybody said that I was an expert, but that isn’t quite right: I only copied and memorised all the useful information which I took from the books.
– And in the meantime your bookshop grew with the motor-racing track. 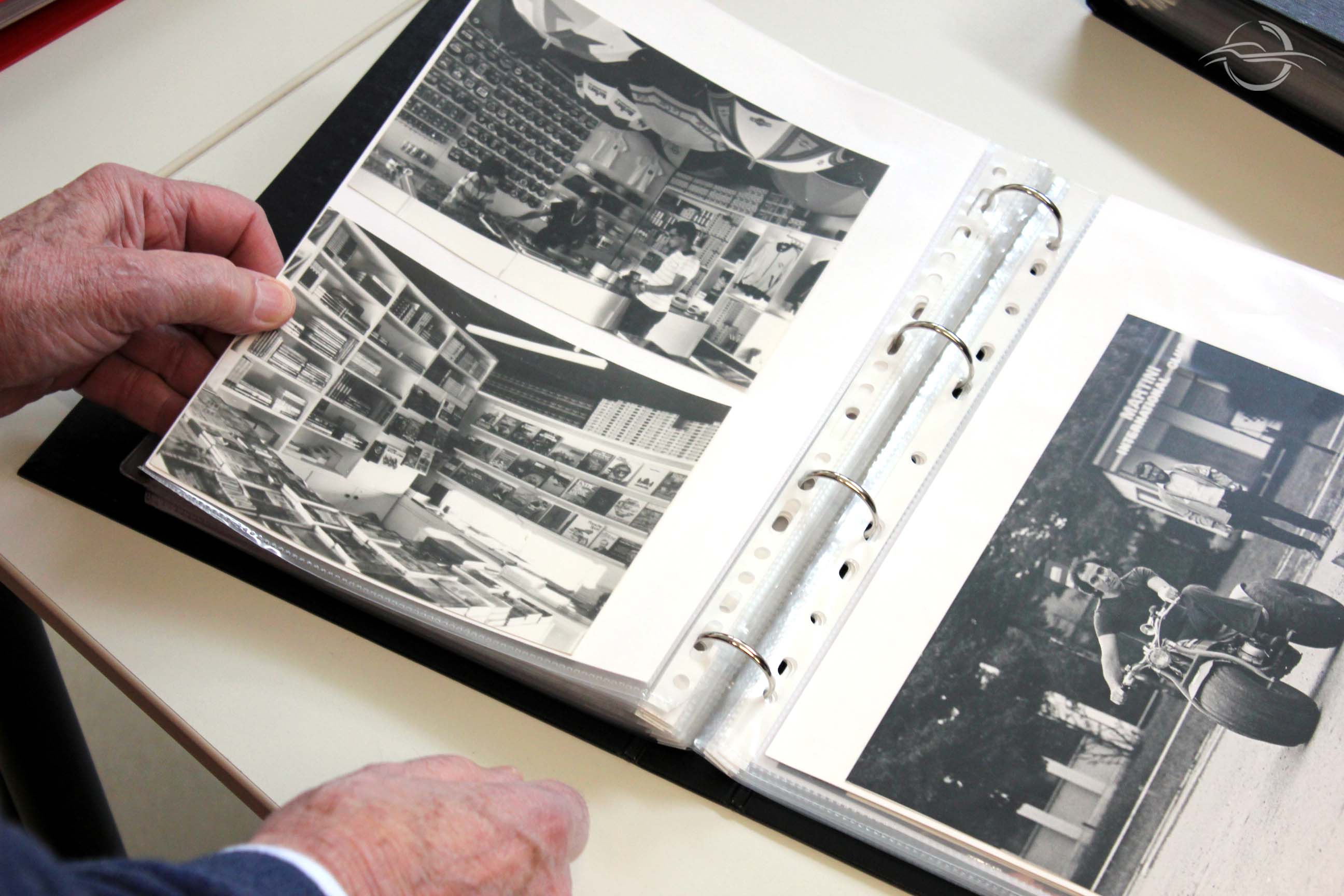 – Yes, there wasn’t a Grand Prix where all the protagonists didn’t come to say hello. All of them did!
– Was the motor-racing track only used for the Grand Prix?
– … For the Grand Prix, the Mille Chilometri race, the Grand Prix of the Lottery, the Coppa Carli and the Coppa Intereuropa in March. There were six or seven races in total. At a certain point, my wife and I realised that by keeping the shop open every day (and as we had a car park), people came to the park and to the motor-race track… and selling was a lot easier for us. Then, little by little, the other shops arrived too.
– Tell the truth, do you still travel around the world looking for memorabilia?
– No, no more. Prices have increased too much now. Even if they keep searching for me, especially widows… There was a journalist who wrote a book about Ferrari (“Roaring Races”), by Giulio Schmidt, who bought a lot of stuff from me… he even used to send me to England to search for the material. One day he told me: “Hey, my wife sleeps with your mobile number on her bedside cabinet and she has been instructed to call you, should anything happen to me!” However, I cannot continue anymore now… I have two daughters, it’s best if I sell everything before I die. I don’t want them to be left with a burden. Despite him joking constantly about his “venality”, the fact that he says that he’s sold everything, Mario Acquati has a lot of things still. They’re memories: photographs, items, posters which acquired a different importance through time passing, which differs from material relevance. It’s the importance acquired through history, victories, dreams. Faces which aren’t amongst us anymore. The life of the Master is a tree which has grown next to (not in the shade of!) the great “theatre” of the motor-sports track and of the characters who have raced through its stage. Acquati’s shop, the one which in 1973-1974 became the legendary Libreria dell’Autodromo, was a little like the “behind the scenes” of this great theatre. A public but yet intimate place.
– Can you see these photographs? Gabriella Noris, Antonio Ghini’s ex-wife took them, today he’s the manager of the Lamborghini museum. 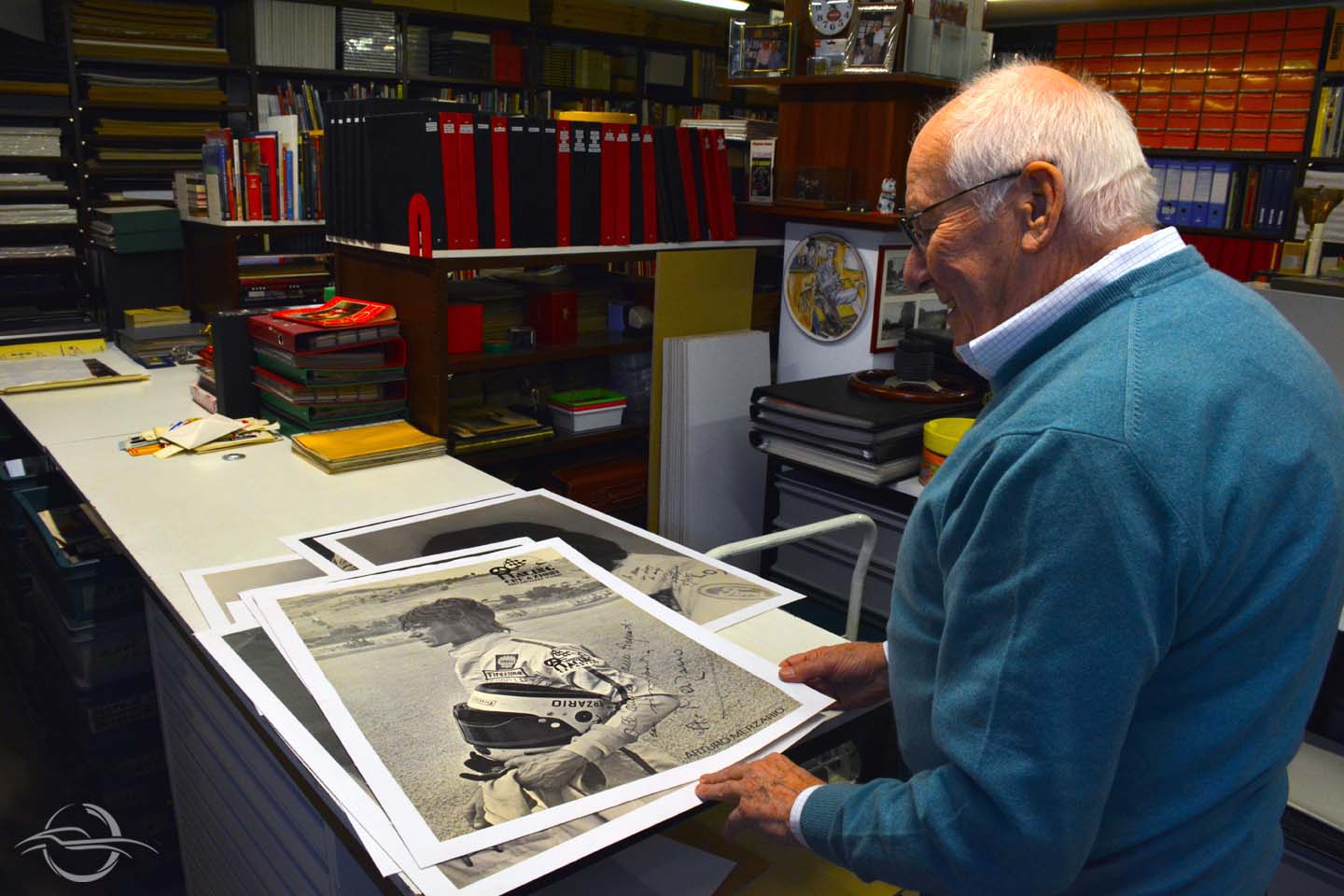 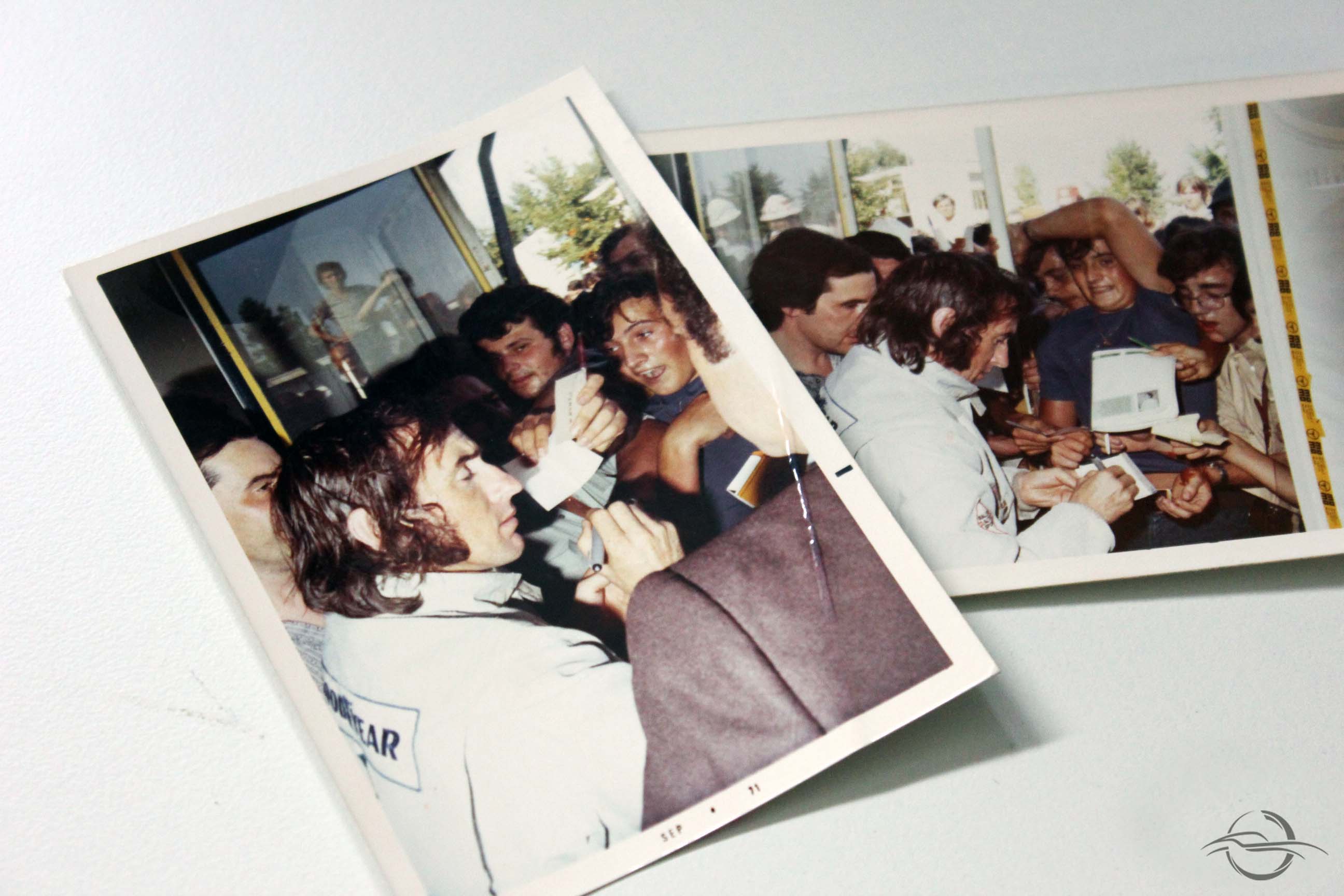 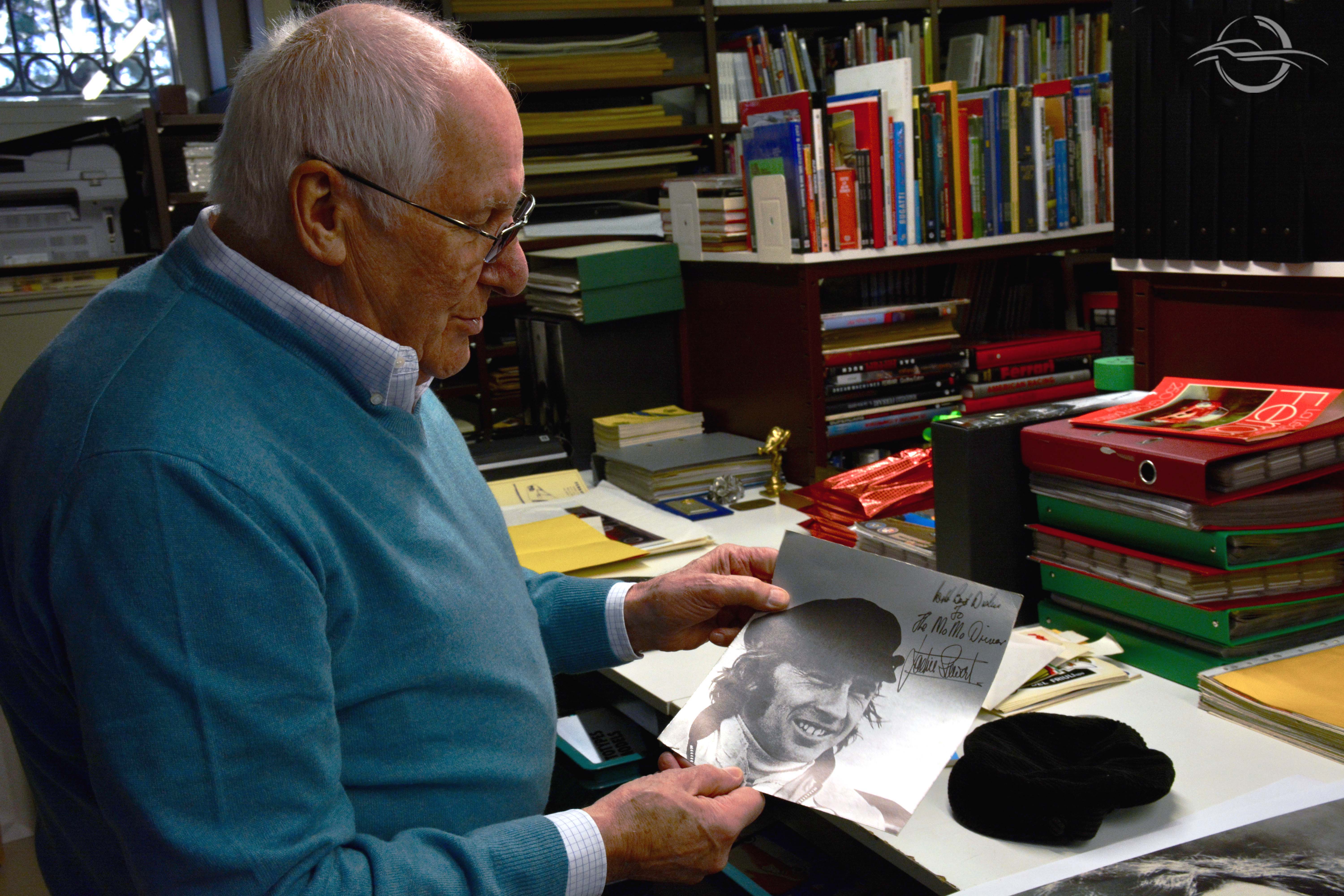 – Talking about legends… did you actually meet Ferrari?
– Of course I did. In the 70’s I went to Fiorano with Eugenio Dragoni, the president of the Team SantAmbroeus, who later also became the Ferrari sports manager. CSAI had appointed him to select some drivers to use for the European Races with Formula Two and Dragoni asked me to lend him a hand. The first time we went to Fiorano, Ferrari – who was always interested in everything – asked Dragoni, while pointing at me: “Who’s that man?” and Dragoni replied: “Acquati, from the Linea Sport”. Ferrari asked me to get closer: “Can you see this raincoat? Would you be able to make me one which is exactly identical?” It was the famous beige raincoat that he wore all the time. Of course, I said yes and then – very nervously! – I ran back to Milan, at Linea Sport, and I asked them to make a raincoat which was exactly identical to it and I took it to him within two weeks. Ferrari asked me how much it was but, of course, I replied that Linea Sport was very proud to offer it to him. He thanked me and he donated me the book “Le briglie del Successo”, with signature and dedication included. Of course, I sold it later! 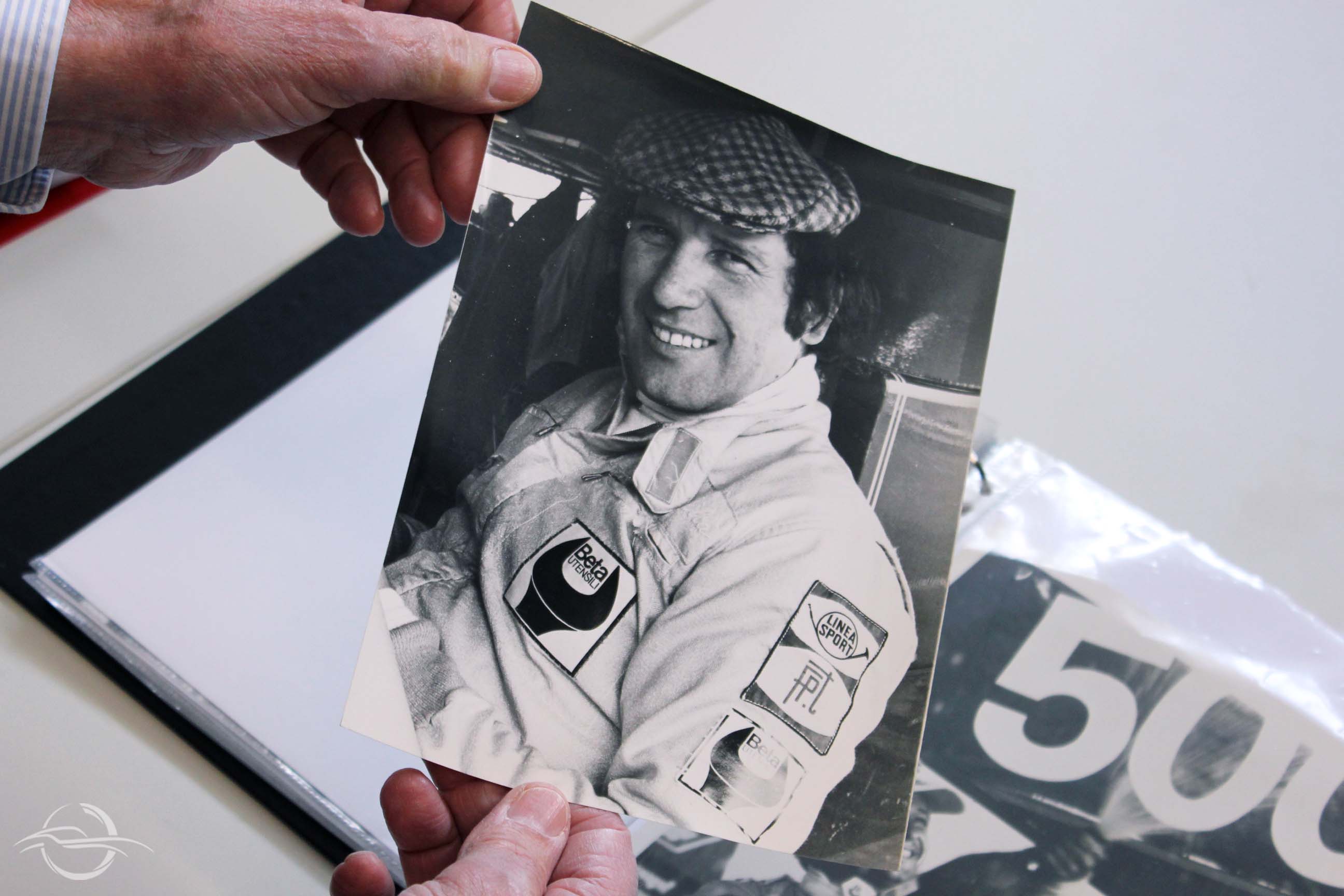 – Did you ever see him again?
– No, but I always wrote to him on his birthday and he replied every time. At the end, I even became an expert on Ferrari signatures… When he died, you won’t even guess how many books signed by Ferrari appeared! His signature was quite easy to falsify. I became an expert of these signatures also thanks to Pino Allievi, the journalist, who imitated Ferrari’s signature as if he was Ferrari in person. Pino Allievi was so good at it that one day, during a press conference, Ferrari himself told him: “Listen, Allievi, they told me that you imitate my signature very well: please show me.” Allievi got to work straight away. And Ferrari said: “No, you shouldn’t start from here… wait and I’ll show you!”
– Is it true that he instilled apprehension?
– Yes, Ferrari was a legend. His cars, all of those kings or nobles who queued up to go to him… he was an idol. And not only for me.

Acquati tirelessly talks while he browses through posters, books and old photographs, as if they were a giant memory book. I wonder if there really is a line between his life and the racetrack. 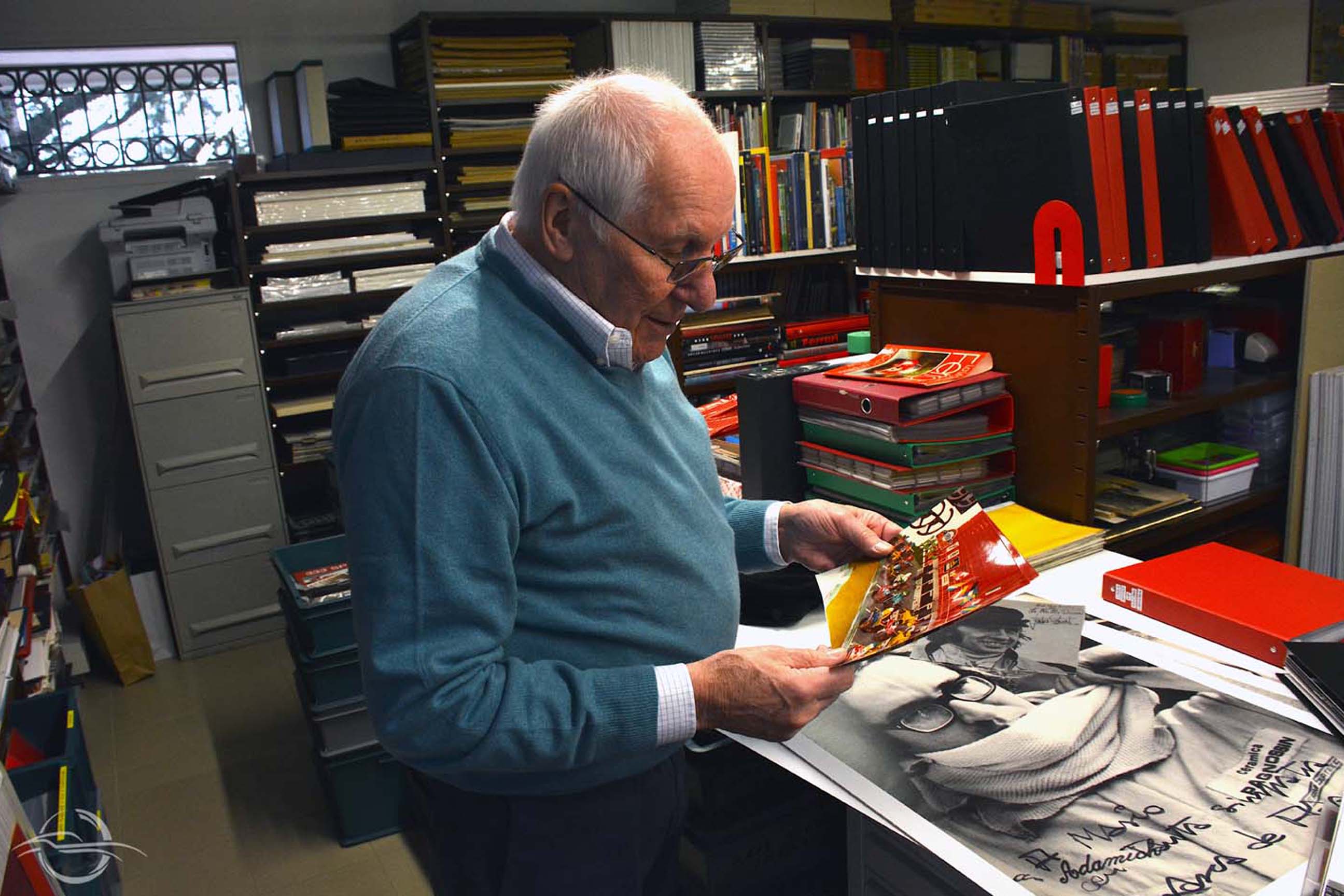 –You mentioned that you sold everything, but is there anything at all that you kept because you were attached to it?
– To be honest, I wanted to create an actual museum, in Monza. I had a lot of stuff. However, one day my wife told me: “Calm down with spending money, otherwise what will we put in sandwiches, posters?” she was right of course. In the end, I offered the collection to the racetrack, but they refused it. So I sold it to an English collector, who bought the whole lot. It’s a shame as I had all of the posters, all of the postcards issued by the racetrack (official and non-official ones, there were 1800)… to the extent that I organised some exhibitions in Monza and Biassonno, out of my own initiative. 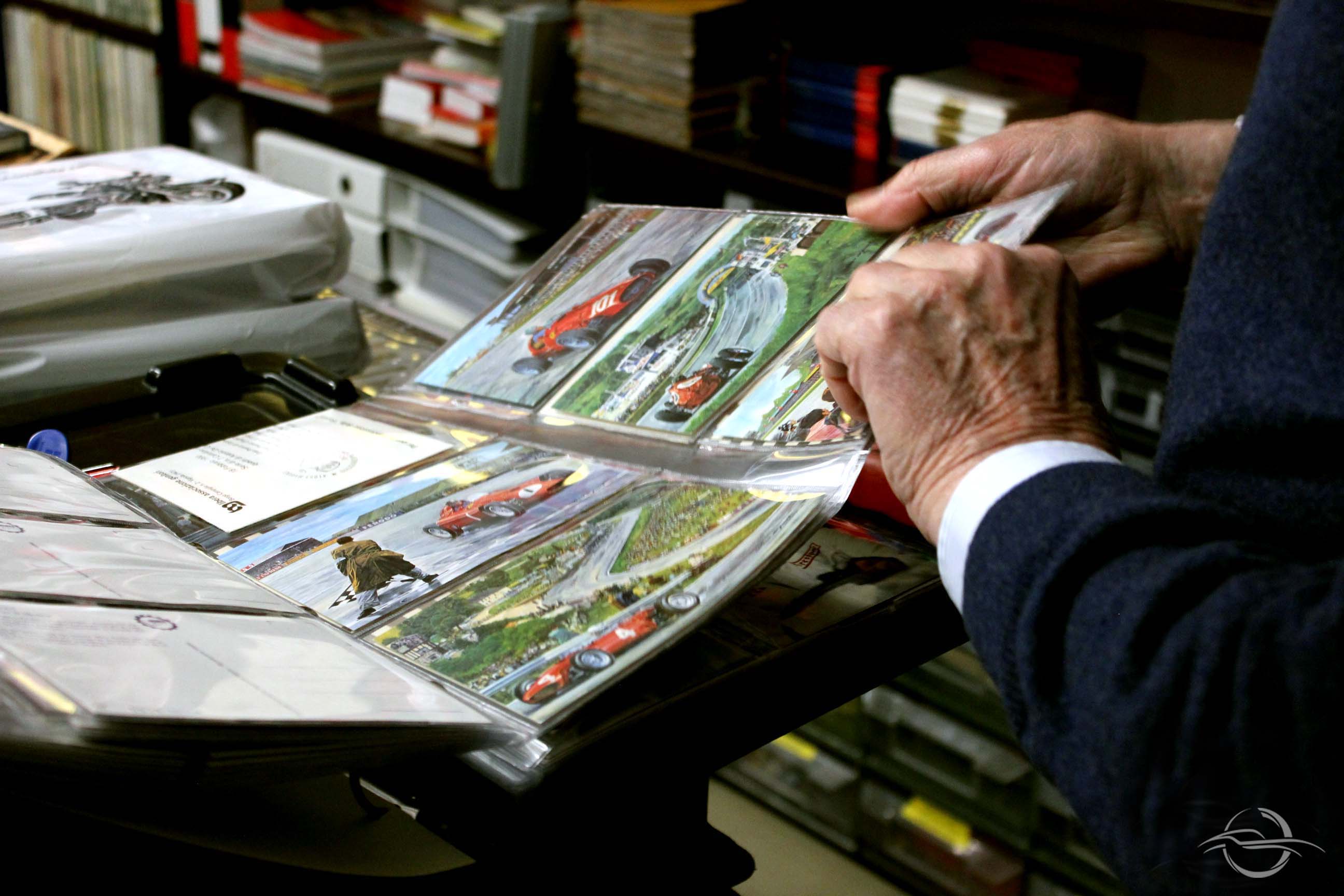 That’s right, what a shame! However, the truth is that Acquati talks about it quite lightly: it’s a shame, but not a shattered dream. From a certain point of view, which I cannot explain, it sounds as if Mario Acquati still has all of his dreams inside: alive and clear, just like many years ago. And while I leave I wonder what will be the actual reading key of a life – his – which is so extraordinarily ductile and kaleidoscopic. Who is Mario Acquati: is he a collector or a master? It’s difficult to say. But it doesn’t really matter. What is certain is that a man like him – who always lived amongst “things” – is actually the least materialistic person who you may imagine because Acquati was able to let “things” go. Without holding on to them. And maybe, that is his secret. The master’s secret.