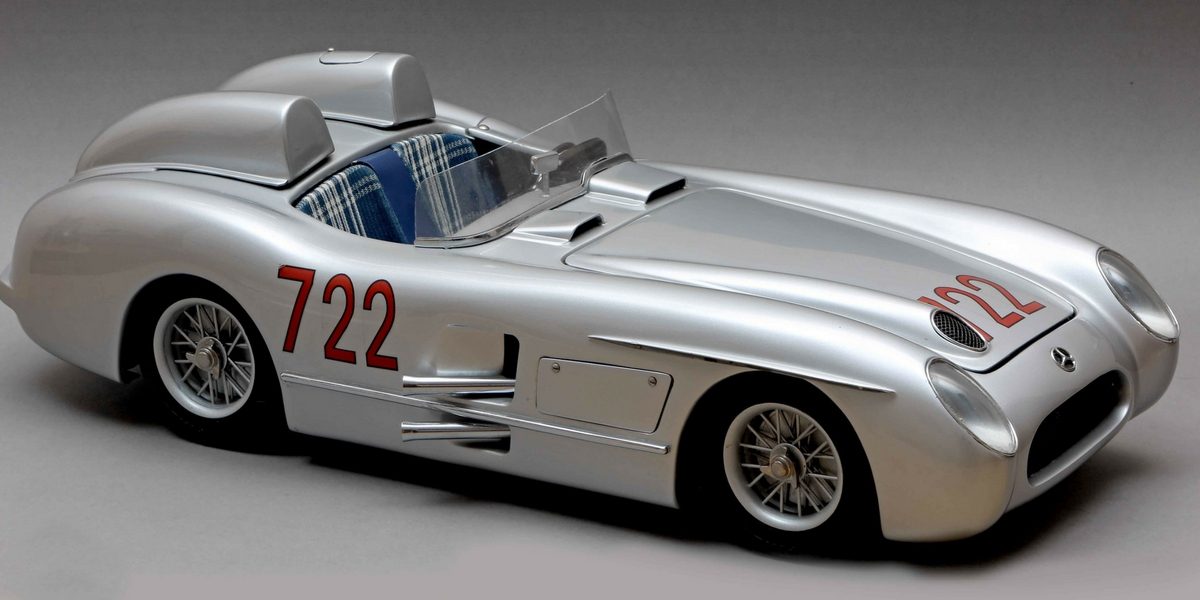 30th April 1955: Stirling Moss won the 22nd edition of the Mille Miglia, on the legendary Mercedes SLR, with number 722. Behind him came Taruffi on a Ferrari and his team mates, Kling and Juan Manuel Fangio. At the head of the team was the dynamic Alfred Neubaurer, the famous sports manager of the three-pointed star during the 20’s and 30’s car races. 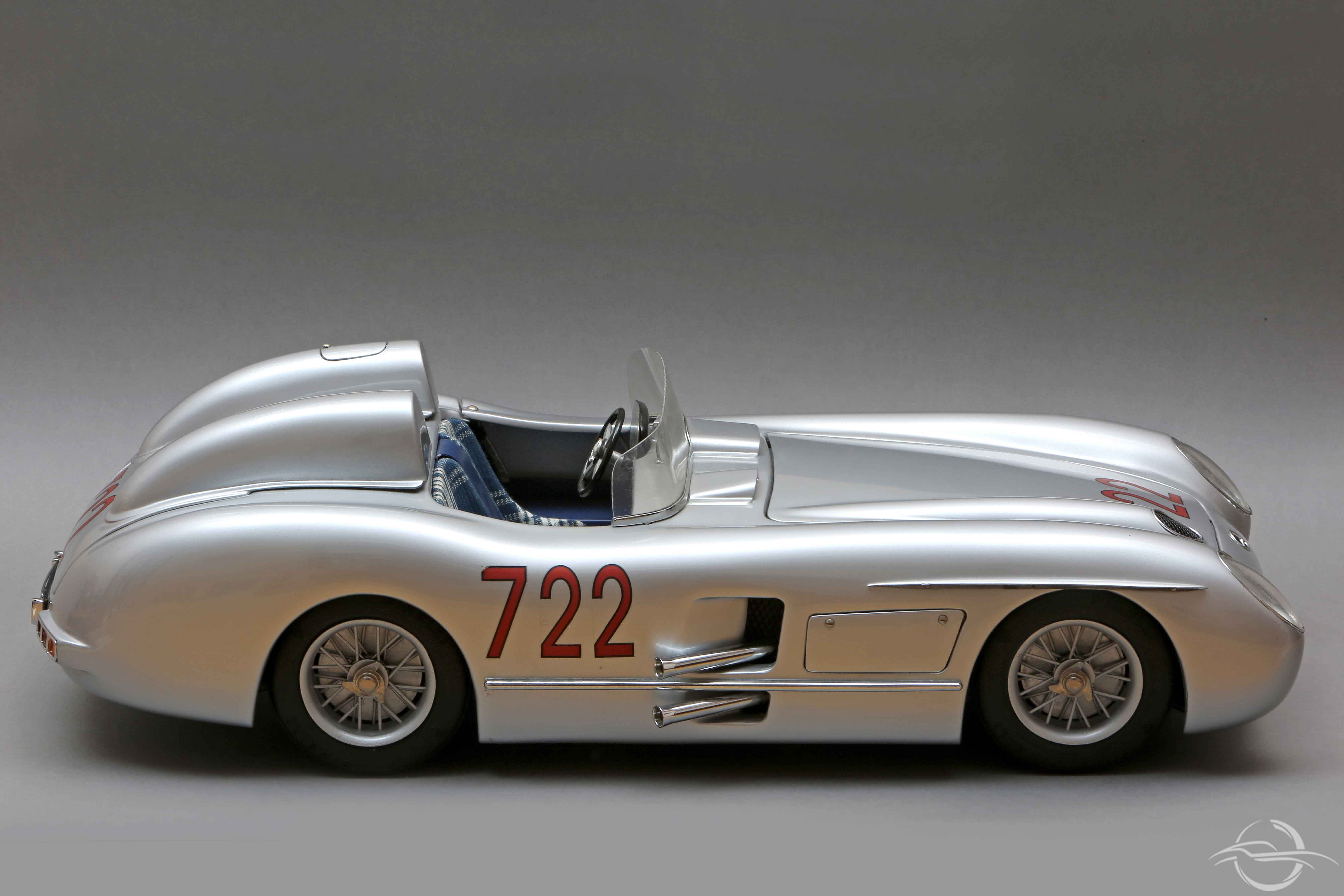 It was a legendary victory, Sir Moss passed the chequered flag at 160 km/h. He took 10 hours, 7 minutes and 48 seconds, with an average speed of 157, 651 km/h. This is a difficult record to beat and in fact, it has never been beaten as yet. 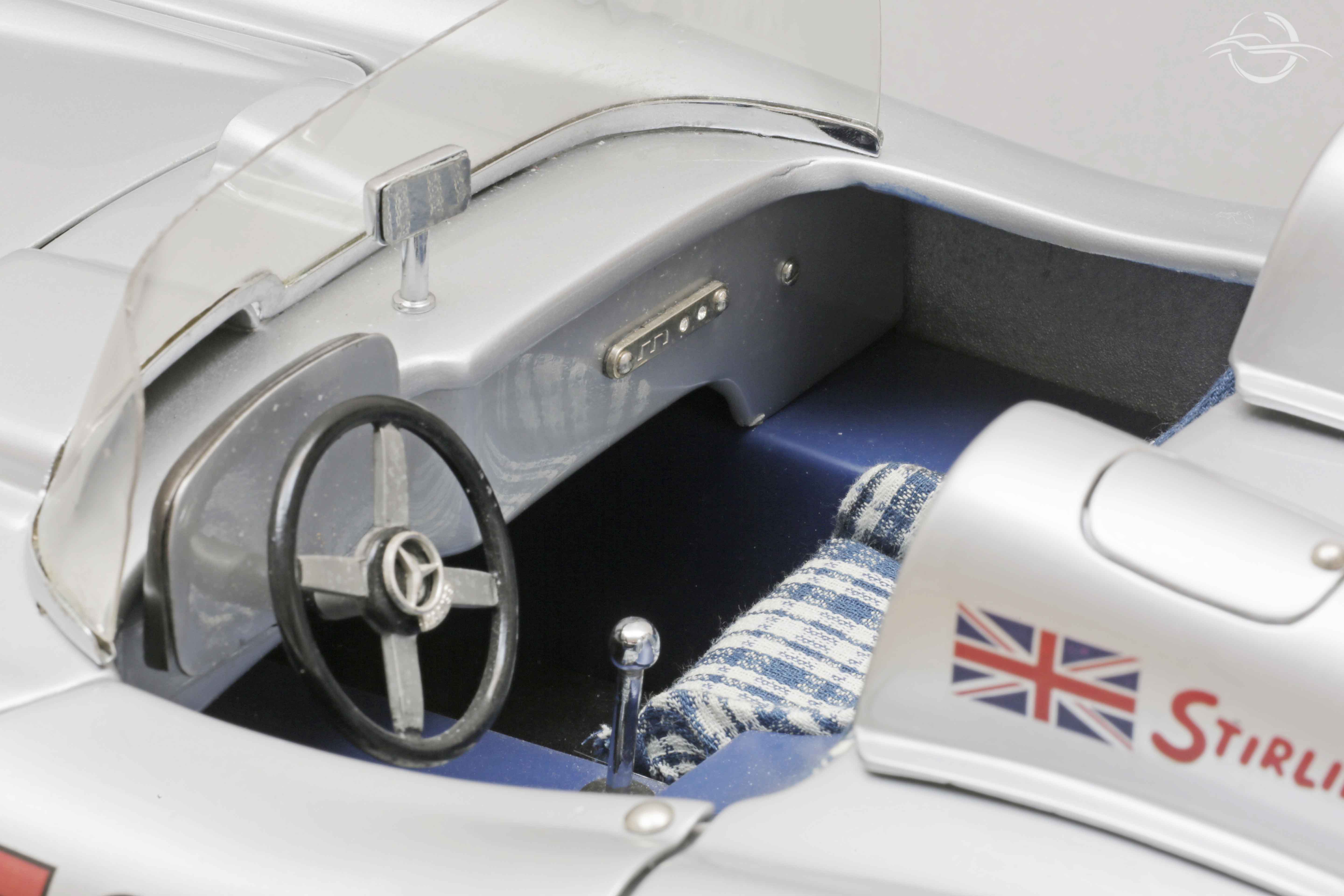 His co-driver, Denis Jenkinson, the well-known and bizarre sports journalist, had a lot of experience. During the months prior to the race, Stirling Moss and Jenkinson drove along the whole route of the race for five times. Three times behind the wheel of a Mercedes 220, once with a 300 SL and one with the SLR. 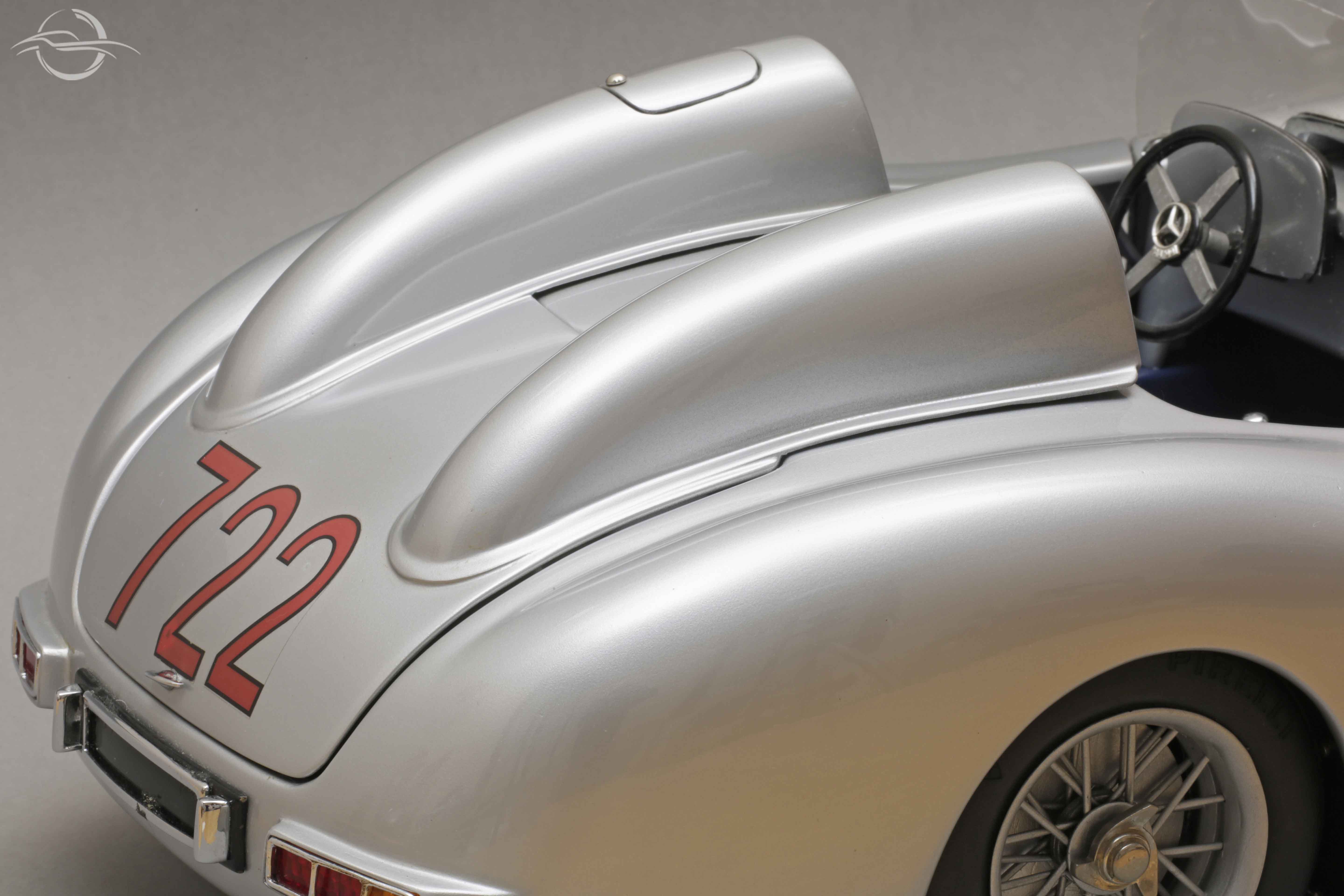 The English journalist “Barbirosa”, as nicknamed by the Italian public, maybe not fully aware of the chance that he was taking, meticulously noted down several references concerning the route. He documented every singles bend, obstacle, the condition of the road, the level crossings or tram tracks. These notes turned out to be very helpful and enabled Sir Moss to “be perfectly aware of where to put his wheels, at all times”. During those years, the Mille Miglia race was very intense, you started with the sole purpose of crossing the finish line within the shortest possible time. The only breaks planned were to replace the wheels and to fill up. These wonderful cars sped through the residential areas at crazy speed. 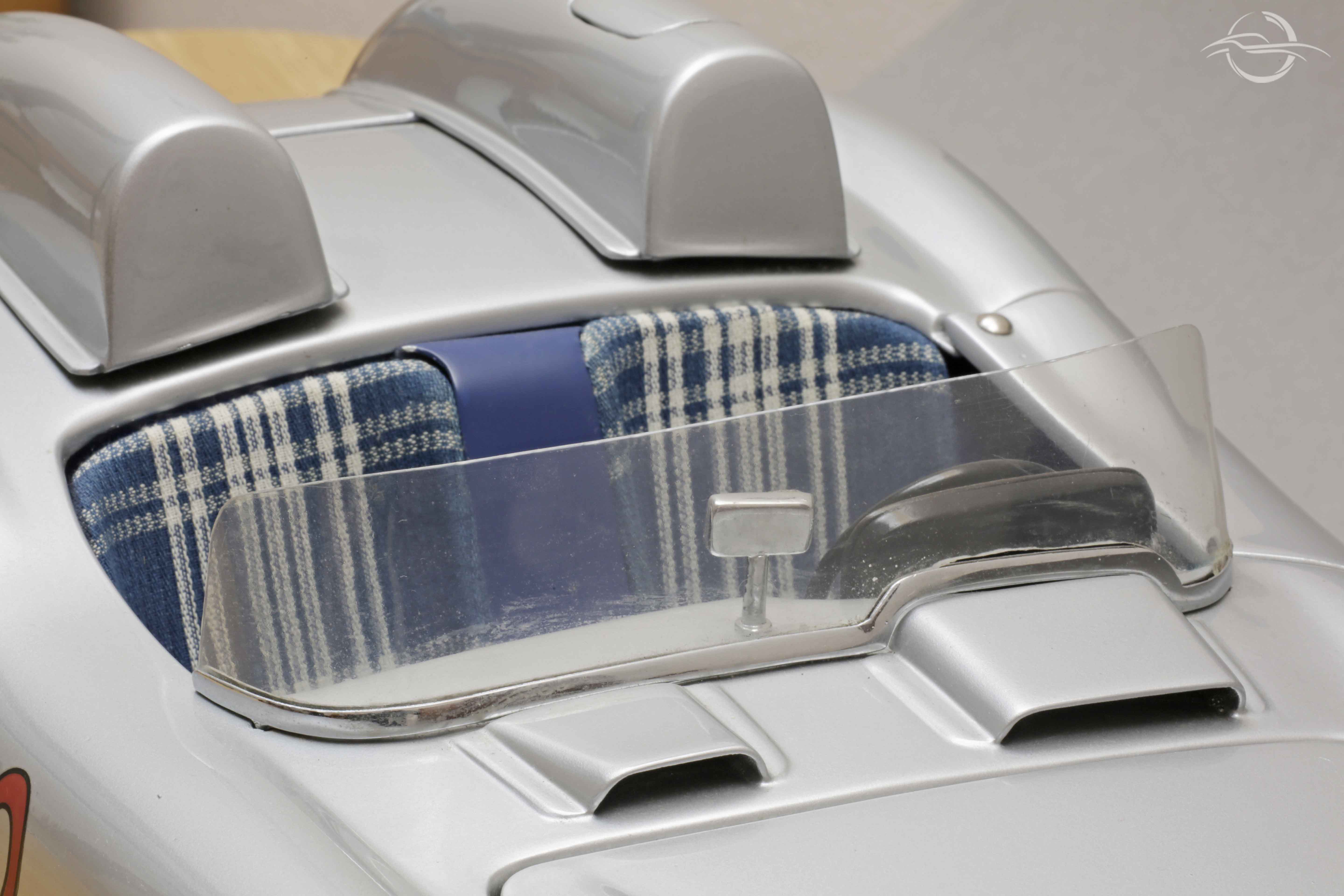 It was one of the editions which was fully spared by the rain. The car was a real legend, a Mercedes 300 SLR. The record was legendary too. The allocation of the racing numbers was peculiar: it is common knowledge that they corresponded to the starting time: at 22 minutes past 7 on the 1st of May. 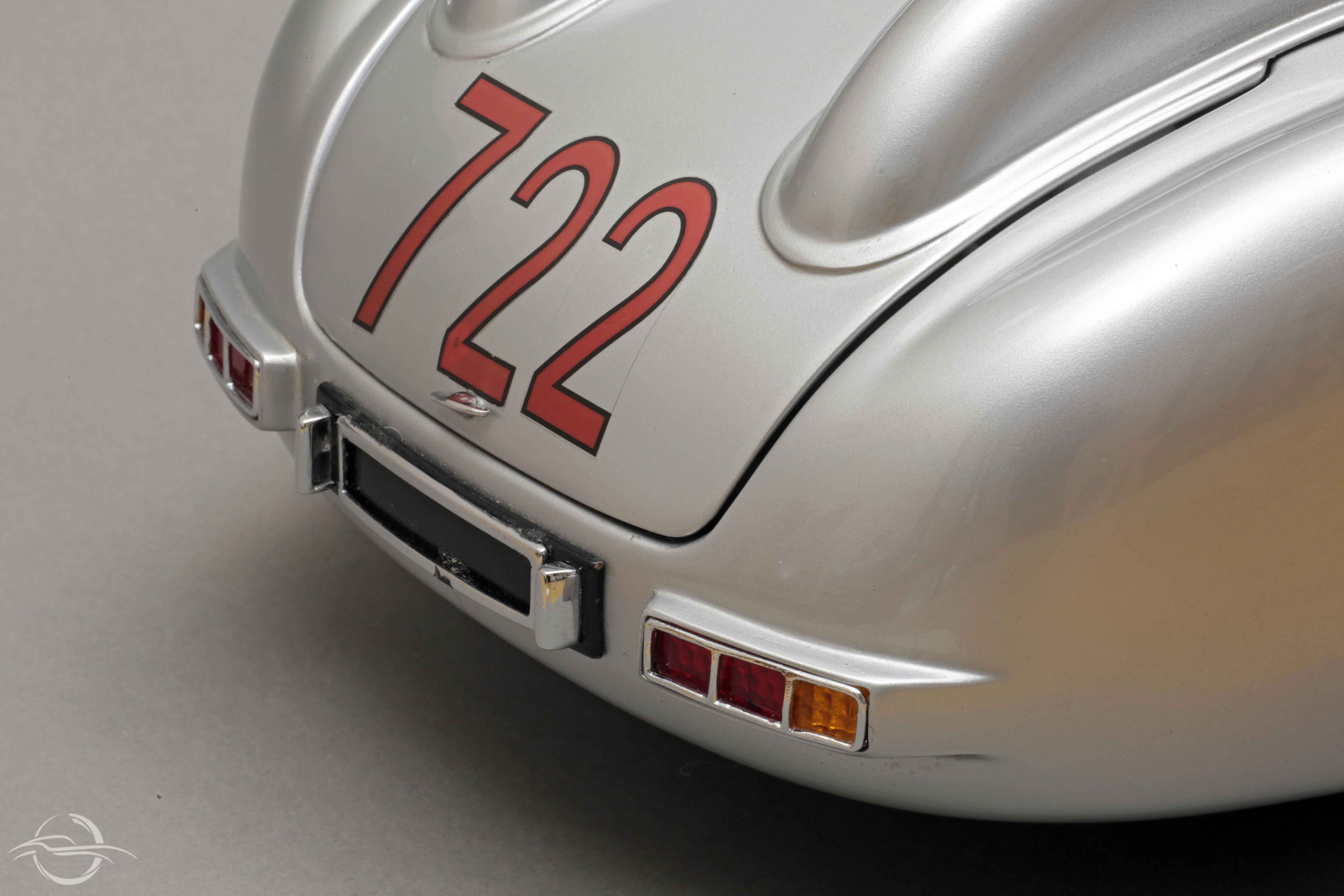 The photographs portray the meticulous reproduction of the Mercedes 300 SLR created by the skilled hands of Mr. Mauro Bonaccini. It belongs to an original and unique private collection, realised by a sensitive man who made of the “panel beater” occupation both his job and his art. 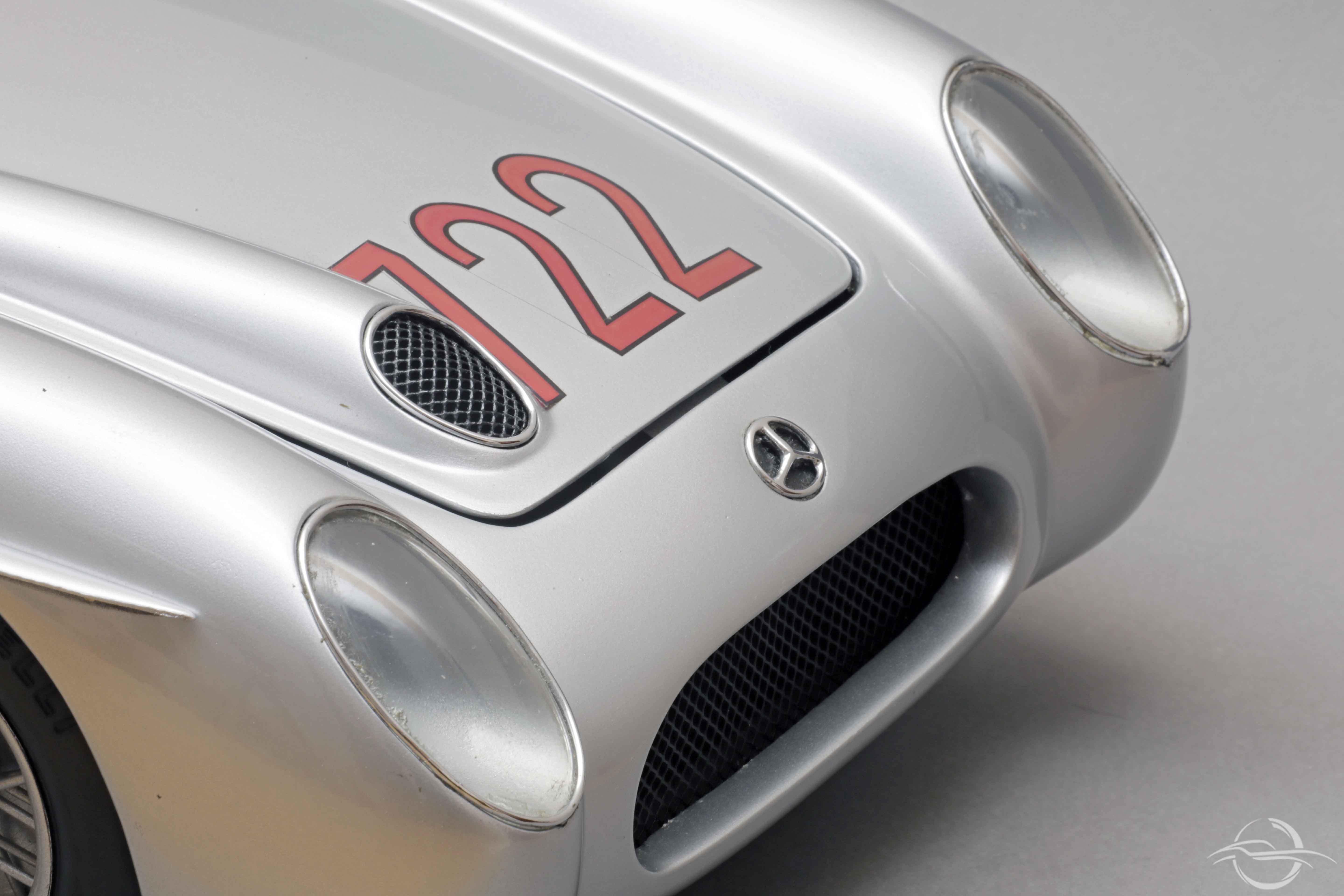 His vitality doesn’t only relate to manual skills. It is a pleasure to witness the care taken in opening the doors, closing the boot or caressing his “babies” with a cloth, because he finds that fleck of dust to be most annoying. Listening to him is a pleasure, with his relentless irony.
We observe the model of the car, which has taken many hours of dedication, skill and patience to create.
The painting work is perfect, who takes care of that?
Mr. Mauro Bonaccini informs us that his fraternal friend Mauro takes care of it.
– You know, Mauro is off work from Friday evening to Monday morning; too much rest makes you rusty… I keep him trained!

He exchanges an understanding look with his dear friend and laughs heartily!