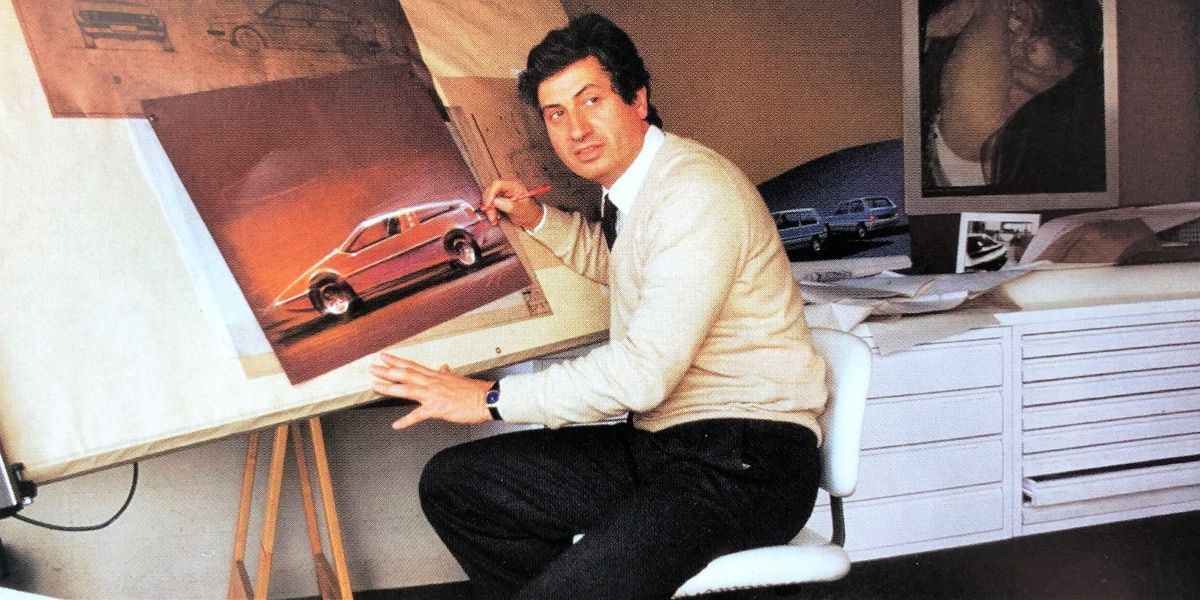 He takes his blue Staedler pencil out of his breast pocket and, while sitting at his drafting machine, he starts tracing the draft… it is a sketch of the Grifo, the Canguro, no, maybe it’s the Fiat 850 Spider.
He is called “the painter of the Madonna”, due to his representative skills, Giorgetto Giugiaro is a designer able to renew, who was brave enough to confront tradition.

Car design is the core of his activity, while product design is the area of interest to extend to. Giorgetto doesn’t put limits to his creativity. From the Nikon camera to the Marille pasta by Voiello. From the San Bernardo water bottle, to the new interpretation of the San Bitter bottle. From the “Sirio” telephone to the high-speed train.

“I admit I’m lucky if… I find myself doing an exciting job… design needs to be linked to the rules of what is useful and the platonic idea of beauty; it needs to preconize the changes in the air from every point of view, comparing against the stimulating world of the new generations which represent the new that advances.”

Garessio is a town with 3150 inhabitants, located in the high valley of the Tanaro, in the province of Cuneo. Giorgietto Giugiaro was born here. His father Mario and his grandfather Luigi were painters and loved music, while his mother Maria was a seamstress. In his father’s studio, he learned the secrets of fresco art. While at home, he reproduced the Impressionists’ paintings meditating on the difference between reproduction and interpretation of figures and nature.
His father Mario recognised his creative talent and he convinced Giorgetto to integrate his figurative studies with the technical knowledge and exercises. He moved to Turin to study at the School of Fine Arts. In the Piedmontese county town, he attended the courses of the artist Eugenio Colmo, AKA Golia, who taught him the universe of painting and drawing. Dante Giacosa singled out his attitude from his panels and he chose him to work at Fiat when he was only seventeen.
When Giugiaro left Fiat, he got a job at Carrozzeria Bertone, where he consolidated the happy dualism between technical drawing and artwork.

His permanence at Bertone, from 1959 to 1965, resulted in twenty-six projects, the first was Alfa Coupé 2000 Sprint. Giugiaro obtained from Bertone the privilege to sign the sketches of the new models, which had never happened before. In 1959 he was only 21 years old, but there are no juvenile excesses in his work, only an extraordinary ideal balance between invention and validity of the job. In 1960 he was called for the national service in the Italian Alpine troops.

After months of training in the mountains, he managed to get moved to the barracks in Bra, thanks to Nuccio’s help and his portrayal skills. During this period he drew the 2+2 Ferrari 250 GT, the Aston Martin DB4, GT Jet, the 4-seater BMW 3200 CS coupé, the Maserati 5000 GT, the 2+2 ASA 1000 GT and the project of the Alfa Romeo Giulia GT, the first of the fortunate series.

His experience at Bertone’s was essential to acquire and master the technical processes and their feasibility. In 1965, Giugiaro took over management of the Ghia Style and Designing department which, at the Turin exhibition, presented the extreme Mangusta by De Tomaso and the elegant Ghibli by Maserati.
Knowing that he could count on his now consolidated fame, Giorgetto founded his own company, Ital Styling first, and Italdesign afterwards, together with Aldo Mantovani, his inseparable work partner and fraternal friend.

They were put in charge of developing a completely new project: Alfasud, presented at the Turin exhibition in 1971. In the meantime, Volkswagen got in touch with him for the trio Passat, Scirocco and the legendary Golf. Giugiaro was able to demonstrate his pragmatism, these models didn’t need to be trendy, but they needed to ensure a long cyclic nature of the models.
Fiat approached Giugiaro and Mantovani for the project of the future Lancia Delta.

He was able to represent both luxurious formal statements and the essential mobility philosophy, like the Panda legend. He won the reliability challenge: at the presentation in 1980, the Fiat Panda’s strength was actually the interior and the wide transformability guaranteed by its seats. Chapman also put him in charge of the Lotus Esprit. From Hyundai Pony to the four-door Maserati… to the Uno, the BMW M1, Isuzu Piazza, De Lorean DMC12… to the Saab 9000, Lancia Thema and Fiat Croma. The sharp-cornered period, with the Tapiro, the Alfasud Caimano and the Maserati Boomerang. The trip back to the past with the three Bugatti’s EB 112, EB 118 and EB 18/3 Chiron. Under Montezemolo’s personal involvement, he developed the appointments for the models Maserati 3200 GT, 4200 Spyder and Coupé and the powerful MC12.

Seven honoris causa degrees: three in design and four in architecture. Countless recognitions awarded to him over time, such as the “SIAD Silver Medal” in 1980, the “Premio Compasso d’Oro” (Gold Compass Prize) in 1981 for the Panda design. He was honoured with the title of “Cavaliere del Lavoro” (Knight of Work) and of the “Premio Leonardo Qualità Italiana” (Italian Quality Leonardo Award).

His son Fabrizio followed in his footsteps and, besides the generational differences, the creative work carried out in synergy between Giorgetto and his son is of stimulating and innovative dialogue.

“It’s all about looking forward to exploring a search for change to what we already had, and little by little, as you create, you need to do something different… the difficult part is to prevent something from being banal… to find new paths, you need a lot of respect and your availability to learn.”