The tale of three Lotuses – Part 2 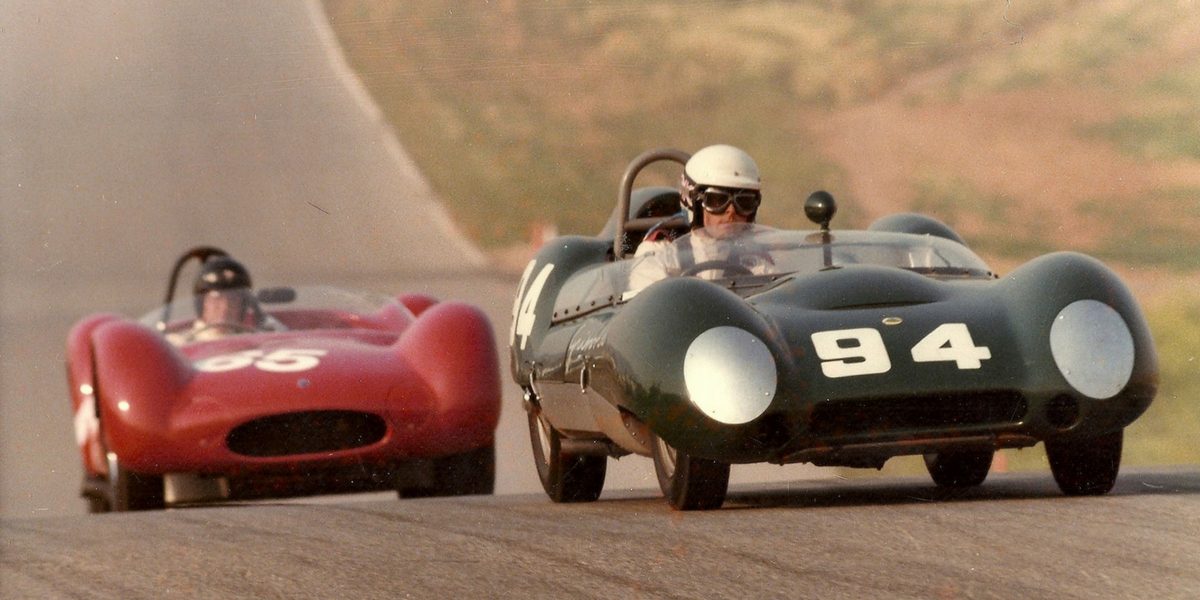 I wrote previously about my trip to visit Grand Prix SSR and Jim Mc Allister. I had purchased my Cooper T53 Grand Prix car and a Maserati 150s as well as 2 semi-complete Lotus 15s which I had then sold to Chris Drake Collector cars in the UK.  While I was there I noticed a silver series 2 Lotus 15 parked in a corner of their workshop. I asked about the car and it turned out that it belonged to a long-time friend and ex-patriot Englishman Murray Smith. I was told the car was for sale so I called Murray in New York City where he was living and worked out a deal to buy it.

The car was shipped to my shop in Berkeley and I put it aside for a year as I was so busy with other client’s restorations. I was undecided whether to restore it or just sell it on and let its new owner decide what to do.

This is what I finally decided but in order to get the best price, I decided to give it a light recommission and take it for a spin at our local track at Sears Point. Test sessions are a mixed affair with cars of great speed differentials. I went out for a few laps and all was working to my satisfaction when a Formula 5000 Lola passed me on the inside of turn 1 and forced me off line.

There was gravel on the edge of the circuit and my outside wheels touched these marbles. Before I could save it the car lurched off the track and planted itself in an earth bank. The front was badly damaged. You may recall that I had a similar experience at Silverstone in my Cooper T53. It is a bad idea to mix cars with such speed differences. I surveyed my damaged Lotus and was furious with the idiot who had caused this needless accident.

I took the car back to Berkeley and thought about what to do. In the end, I decided to do a full restoration and set about to do this.
It was a good choice that I chose to restore the car because upon disassembly I uncovered many problems. Colin Chapman owner and designer of Lotus cars was often criticized for making his cars too lightweight and sacrificing reliability. My Lotus showed signs of this with some cracks in the frame. All was stripped and the weak points and cracks were fixed. I had my panel man Don Nichols make a new nose section. The damaged one was not repairable. The restoration moved along at a good pace. And in 5 months the car was finished and ready to race.

The first race for the car was at Riverside and I trailered the car there along with the Maserati Tipo 60 the ex Menatto Boffa car that I had sold to my friend Chris Cord. There was an IMSA race at Riverside that weekend and I saw my old friend Brian Redman who was there to drive a Porsche 935.

I had been offered a drive in my old Ferrari 375 Coupe that I had sold to Bob Sutherland and I asked Brian if he was interested to drive the lotus. He said he would be delighted. It was a great honor to have Brian drive it. He was one of the absolute best in the business having been works driver for Ferrari and Chevron cars.

The practice went well for me in the old Ferrari with a 10th place starting position but the front row was an all Griswold affair with The Maserati on pole and Brian alongside in my Lotus. At the start, Brian made a demon start and took the lead but this didn’t last for long. The lead must have changed on every lap and on the last lap Brian slipstreamed by Chris down Riverside’s long straight and just held him off to the finish line. This was the perfect outcome and the spectators were treated to a really good racing spectacle.

A few months later Peter Kaus stopped by on his annual trip to the Monterey Historics. When he saw the Lotus he had to have it for his museum and a deal was made and he became the new owner. I was really sad to see it go. I hadn’t even had the chance to race it.

Keep following the story The tale of three Lotuses – Part 3