– I mean, it sounds like you never rested for too long, or am I wrong?
– No, you’re not wrong. I remember that we all wanted to sleep, but there was no time. We slept from one pit stop to another, resting against the tyres at the pits! Everything was a bit improvised: on track at Molshein, we had to replace an exploded and sanded tyre, by lifting the car by hand, and get it back to the box, where they would have replaced the tyres. According to the regulation, we couldn’t actually do it, in fact, we waited after the bend, there was such a bustle there at the pits, you wouldn’t imagine it. One, from outside, doesn’t see it, but everything happened in there. They were very good years but yet very challenging.

– You’ve seen a lot of tracks. Which one was your favourite?
– The Nürburgring, the old track. I liked the Eifel forest with its mushrooms. When we found them, we asked the hotel to cook them so that we could eat them. Then, we got a bottle of Lambrusco out of the boot of the car, as we always had one with us. The Flugplatz jump, then further down towards Schwedenkreuz. These moments left you breathless. The cars arrived, they turned in the emptiness and when the wheels touched the track, they were already in the bend. It was mad, you needed just one tiny mistake to end up outside of the track. Whereas in Hockenheim, when the formulas drove over the tunnel, and I was below, I heard a sound like gunshots and they were the gear shifts, “bang, bang”, it gave me goosebumps! What a feeling! The descent of Tarzan in Zandvoort too, the drivers put the cars sideways before they turned… I still wonder “How did they do it?”. 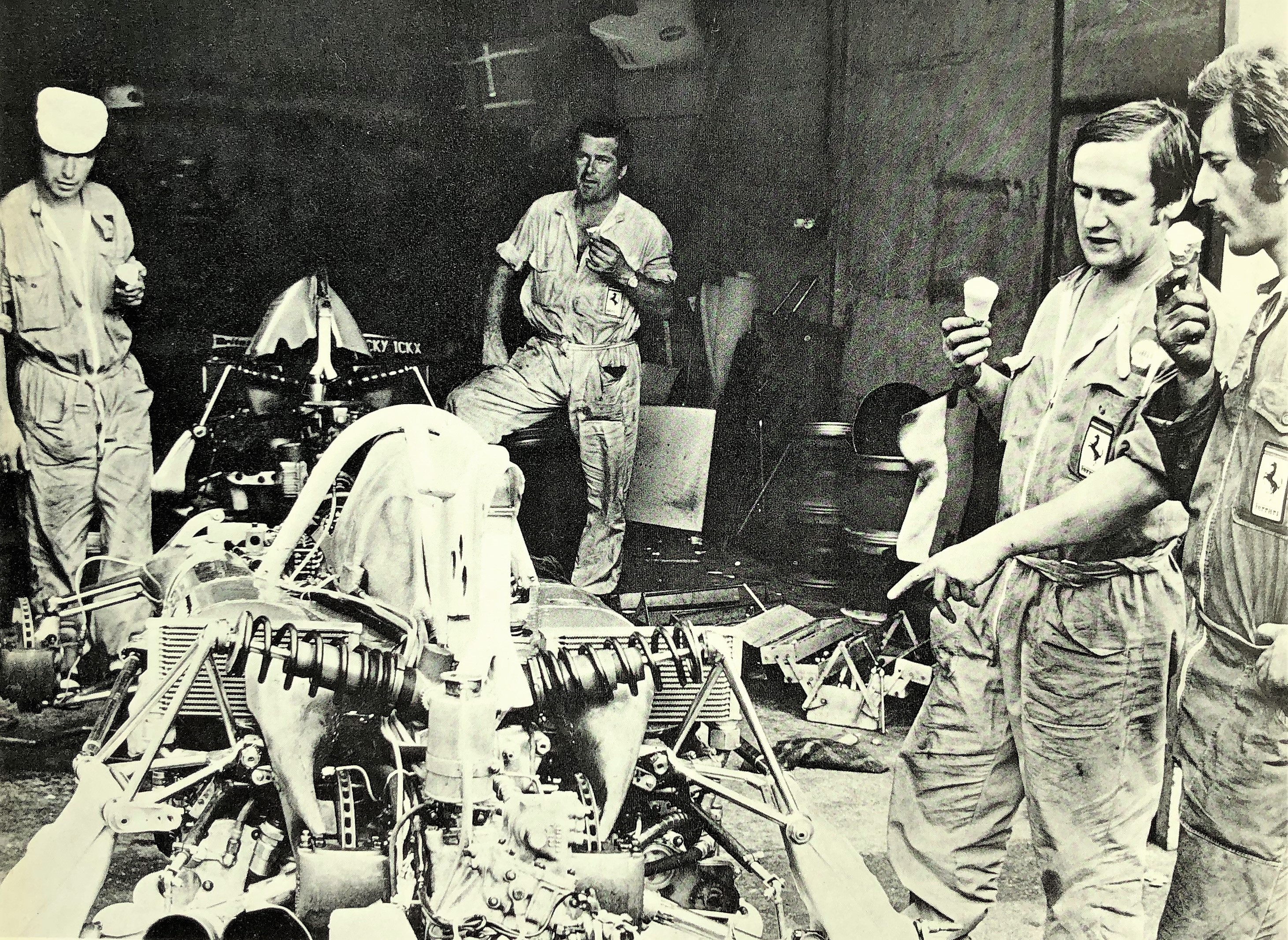 In 1971 Ferrari mechanics at German Grand Prix, picture from the volume “Photo Formula1”

– Who was your favourite driver?
– None… because I know that I shouldn’t get too attached to anybody, I have always known that. I will tell you something now. There’s a photograph of my father with the helmet at the racetrack. There is a story behind that photograph, which taught me a lot. Martino Severi, the test driver, had got out of the car and told my father: “Come on Sergio, let’s take a photo”, so they both posed there with the helmet, my father with his dangling cigarette. The photo was taken and my father gives the helmet back to Severi who then goes back to racing… but on the second lap, he hits the door and ends up off the track. Do you understand? A few minutes earlier he was there, with my father. That’s why I am telling you that I must not get attached to anybody. The blow is too hard if that happens. If Lorenzo Bandini’s accident didn’t happen in Montecarlo, it would have been the best race in the world for me. Each one, with his own personality, left a footprint in Ferrari. The taciturn, the dynamic… I liked Ricardo Rodríguez de la Vega a lot. He was confident, likeable, he had a personality quite similar to my own. Whereas, a driver who I believe was matchless, was Clay Regazzoni! – What was special about Clay?
– He was outspoken. If he had to say something, he told it straight to anyone, were they a big man or a worker. I remember Clay and Lauda during the Maranello-Montecarlo “race”, with nine tickets which Ferrari had to pay. Do you know that Clay drove Montezemolo from the Maranello plant to Montecitorio in Rome in only three hours?
I remember that we were testing a car on the track and Luca said: “Clay, I need to be in Montecitorio at 11:30, you deal with it”. Regazzoni was wearing his Formula One overalls, he removed the helmet, they got a Ferrari Daytona and they left… after beating all overtaking records on the left and on the right, he made it on time! 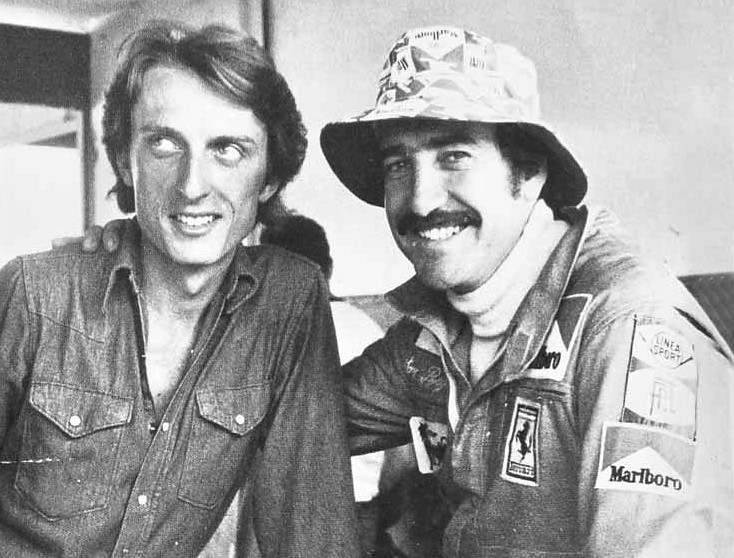 – Is there another driver which you stuck in your mind? Not necessarily your favourite.
– Well, Gilles Villeneuve. Enzo Ferrari and Villeneuve completed each other. Gilles could have been his grandson. Enzo Ferrari received a major benefit from Villeneuve, he brought him a breath of youth and cheerfulness. When Gilles arrived, the chief was transformed, he was no longer the “Umóun” (the big man)! At the table or in the office, he smiled all the time, everybody realised about this and they purposefully asked him “Engineer, are you all right? Come and see what a good job we’re doing!” and he used to answer “Yes, I’ll come when I want to”. There’s not much to say: when Villeneuve was there, he was radiant! I saw that young guy doing tightrope walker tricks, he used to drive into Fiorano like a rocket. With the Fiat, he used to brake, pull the handbrake, and the car used to “jump”, it actually did, then he parked it aligned with the others. “How did you do that?” They asked him, and he answered: “I don’t know, I pull on the handbrake, the car turns around and that’s it”. The car was an extension of his own body, of a foot, of a leg… he was unique, truly unique! A beautiful person.
He used to come to ours for dinner and Franca, my wife, made pork chops cooked in milk with a bit of parsley, with a side of potatoes and one litre of milk to drink. You should have seen how happy he was: he was as happy as a child at Christmas! He ate like that. When I assisted in the races, they all more or less used to come to my house. On the other hand, it was very close, I lived in Montale. The drivers raced until seven in the evening and then they would have had to go to Montana or Cavallino for dinner, sometimes they were on their own, so I used to tell them “come on, come with me”. I thought that they were like aliens, people from a different planet. 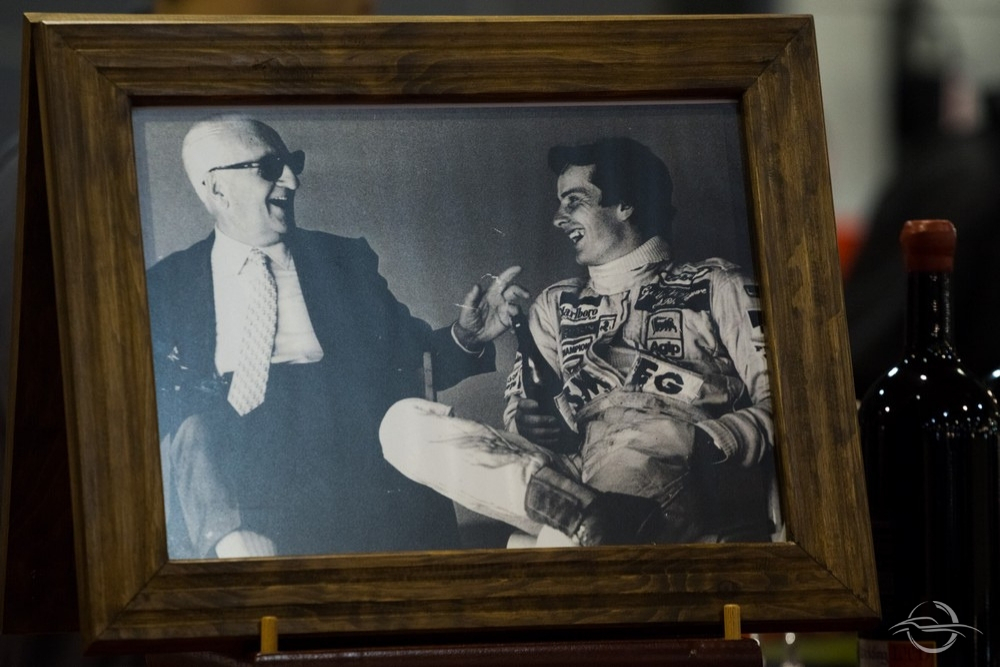 – Why is that?
– Because they were likeable, chatty, good-natured people around the table… then you placed them behind a wheel and they were totally transformed, you saw them extremely focused: nothing else existed anymore to them.

– The drivers were aliens, and what about you?
– Did you know that I’m a robot? I have undergone a lot of procedures!

He says, with a hint of irony in his eyes. Your father called him “Piròn”, but the name that he actually gave him – Oscar – was the same that he, Sergio, had self-attributed to himself many years prior, when he was a partisan. It is a name that he took from a lyric poem (that Sergio loved) but it was actually a battle name. Sergio preserved this fighting and generous spirit until the very end. 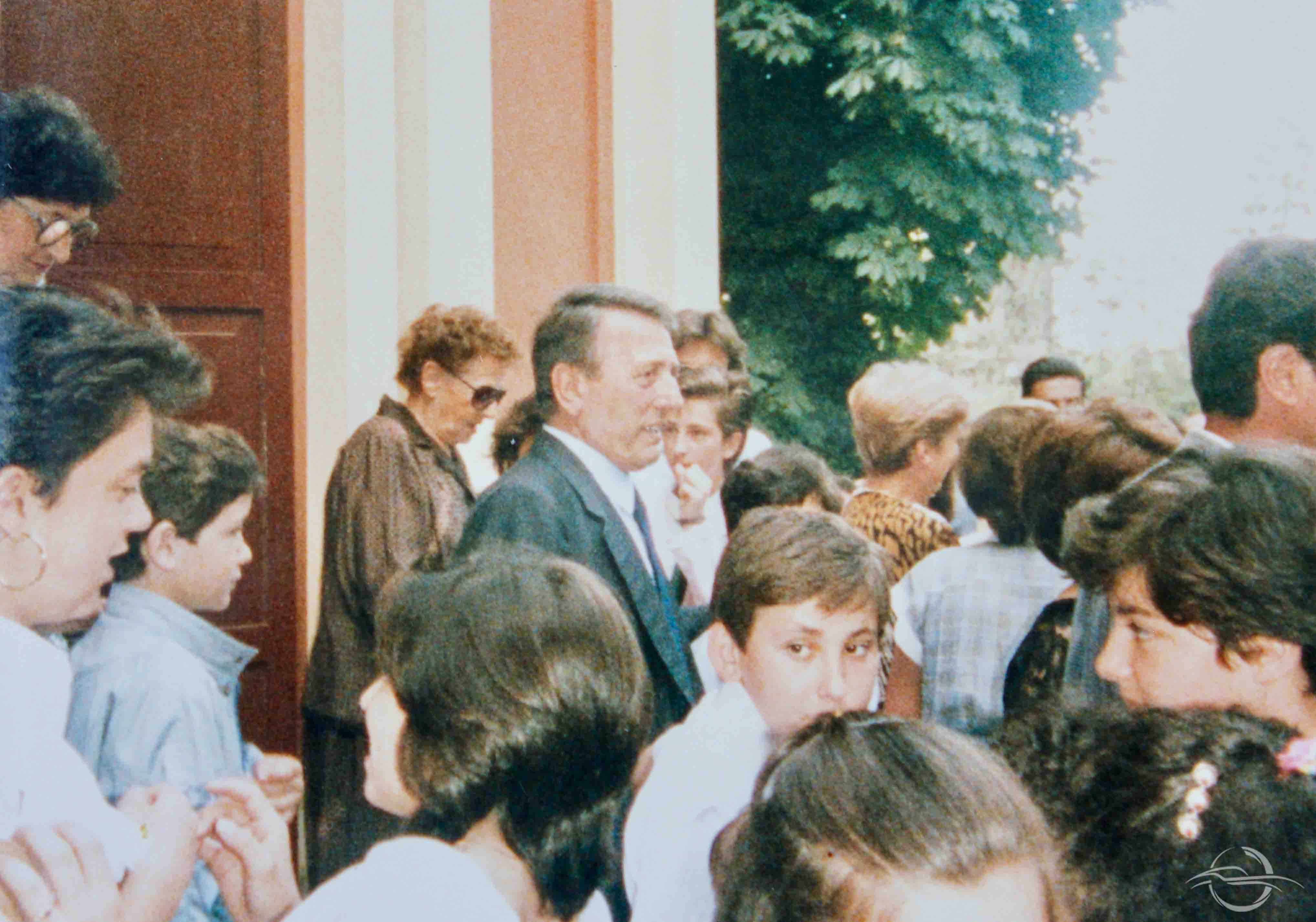 Sergio Scaglietti to the confirmation of his nephew Simone

– My father helped a lot of people resolving their financial problems, even when they were big ones. He was a very good-natured man and he always used to say: “Be modest at all times, because we all came from a dark period and we all know the price to pay for success and fame, but we don’t know how quickly a castle falls apart“. Plant the seeds today, to harvest tomorrow. He was a cautious, wise and good man. Oscar inherited his temperament, he worked on it and over the years, he turned it into a vital drive, into the ability to look ahead.
That is what Carrozzeria Scaglietti has been, a brand which made history.

– When we sold it, our company was indicated across Europe as the most liveable company, with the highest income per capita: maximum productivity, productivity which was worth 110 with merit, equipment worth 200 with merit: we had lasers, robots, automatic pointers… we designed the company around workers and they worked peacefully, carefully, cheerfully. We heard workers singing all day long in our company. 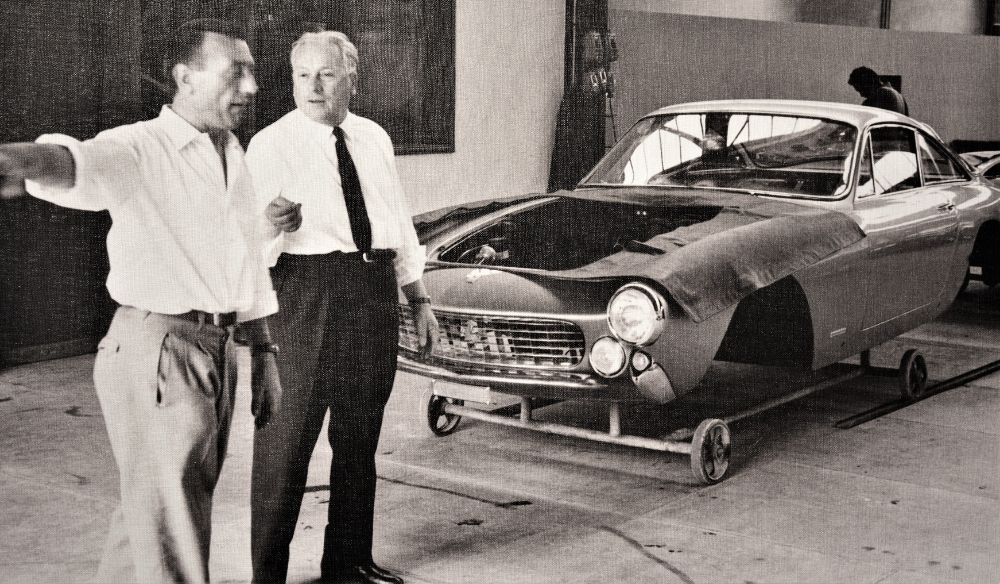 Sergio Scaglietti in his bodyshop, picture taken at the Ferrari Museum in Maranello

It isn’t difficult for me to believe this. The love with which Oscar describes his past is palpable, and it has the depth and consistency of a memory. Today, that brand has been inherited by the son Oscar, who makes fragrances. On the other hand, things change and it’s right for it to be so, but memories… well, they stay with you. Just like cars and that ability to “create beauty” which makes the line between art and craftsmanship so thin because – like Francesco Morante wrote – “Art isn’t defined such because it produces paintings rather than cars, but because it produces something better than average. A work of art may be a painting, just like a car. In every area of human activity, there is top excellence, where products represent a work of art”. 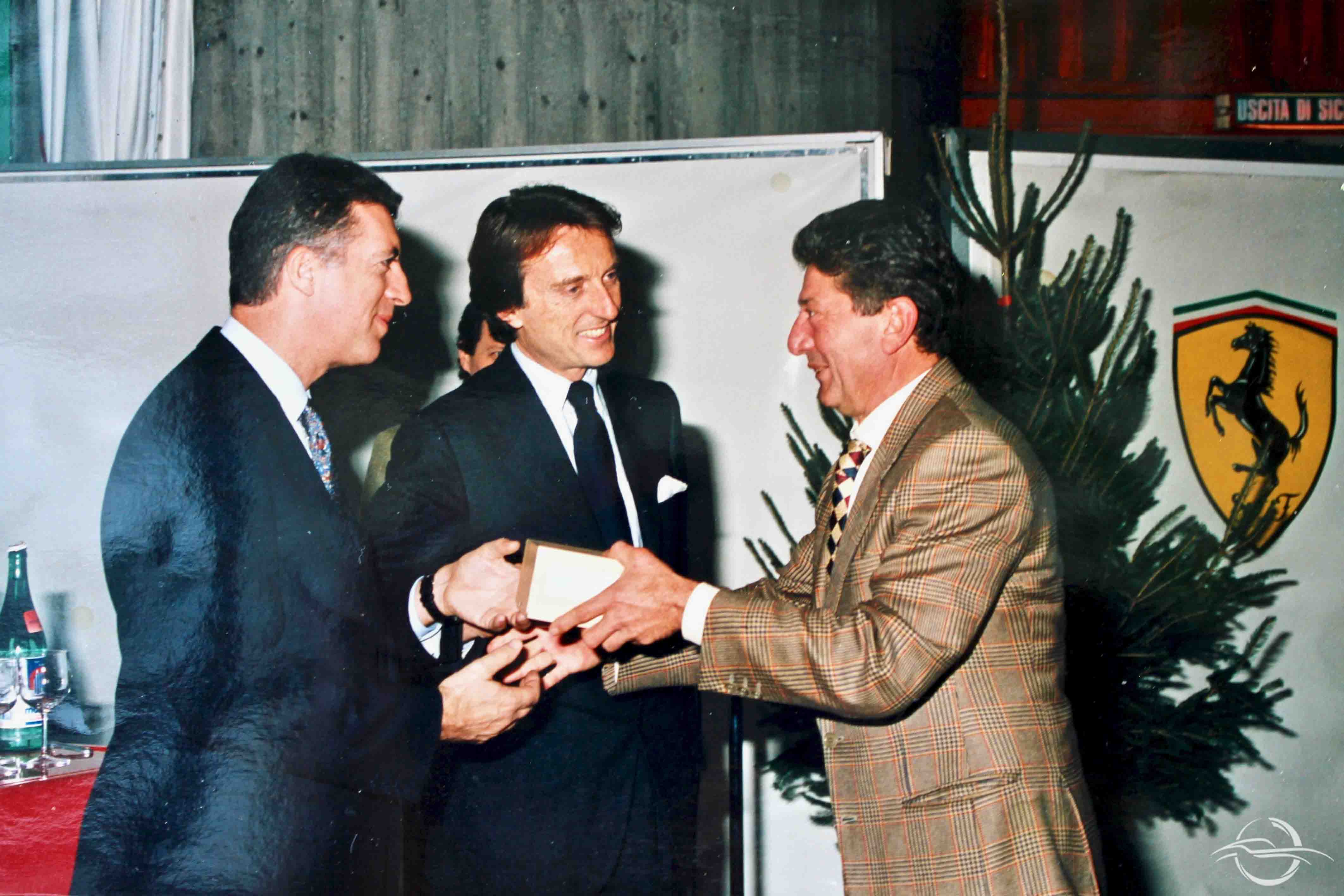 Have you also a story to tell?
Do you know anyone who would like to tell his one?