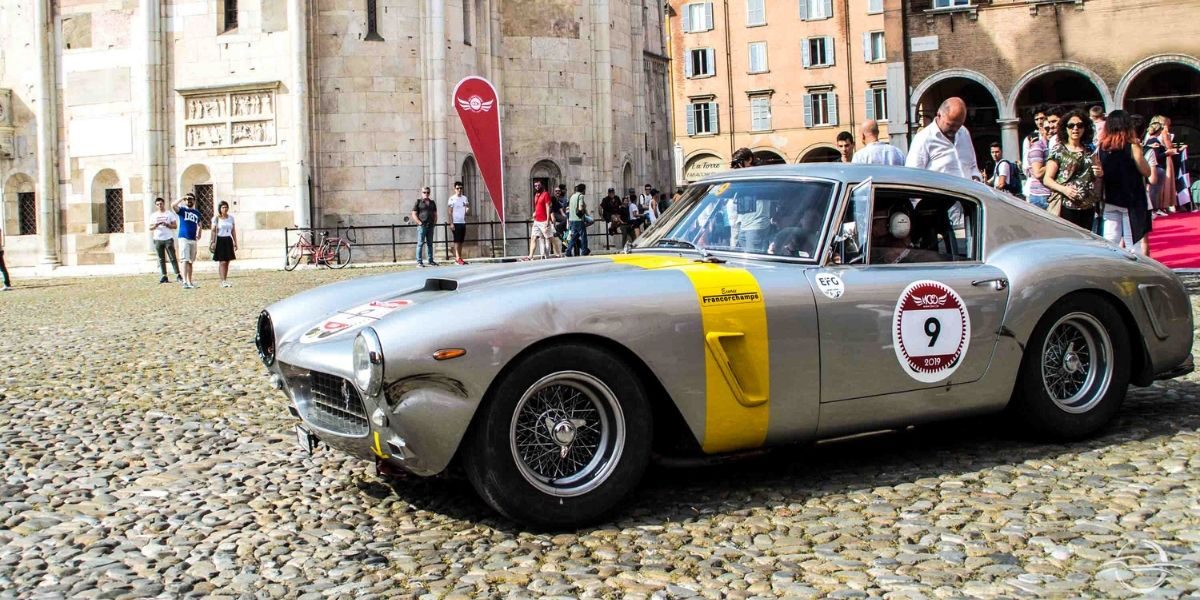 A privileged place, the heart of the city. Piazza Grande, in Modena.
The square is the place for meetings, shows and historical memories.
It’s the place of contact with the outside world. The ideal podium for the Modena Cento Ore.

It’s hot. It is suddenly summer.
I search for some shade and shelter myself under the portico. I’m surrounded by silence and tranquillity. The red carpet is ready. The speakers and the microphones are connected: microphone test, test one, two, three. An artist makes giant soap bubbles. The Duomo and its Ghirlandina, the bell tower, is a piece of world heritage. A hot and relaxed Saturday afternoon.

The “Preda Ringadora”, the haranguing stone, observes us. It was the stage of speakers during Medieval times.
We’re in the heart of the Valley of Engines and from this imaginative stage, we feel the presence of the greats of the Italian motorsports. Eyes to the sky and a nudge in the side, “Ferrari and Cobra are challenging each other once again”.

The Modena Cento Ore is an international race for classic cars, the drivers have challenged each other both on track and on the roads which were closed to traffic. The roar of these powerful engines has echoed across the most beautiful roads of Emilia Romagna and Tuscany, 1067 km over four days. From Rimini to Florence, Forte dei Marmi to Modena.

The impetuous rumble of the engines invades the square and tranquillity turns to fun. Finally, the protagonists have arrived and senses are heightened. It isn’t a home game, but the different languages overlap: 14 countries represented by 104 crews. 23 manufacturers which are Italian, German, English and American.

Drivers and co-pilots are exhausted due to the heat and their performance. “Un fiato di bocche accaldate, dopo sfrenate rincorse” (“A breath of flushed mouths, after unrestrained chases”). The poet Giorgio Caproni referred to children, but the spirit would have been the same for the contestants of the Competitive section who had to pull out their aggressiveness for the 11 special races on roads closed to the traffic, a new Super Special Stage and three GPs on the legendary Enzo and Dino Ferrari track in Imola, at the Mugello and the night race in Misano. For the regularity section, the programme included 11 average tests and 12 timed tests.

The played seriously, and some cars bear the signs of their duels. Now, a page turned, the engines are off and very satisfied smiles disembark from the still roasting hot cars. There’s a central idea between the visual and scenographic relationship of the dominant monuments and the cars which are parked up, resting after the effort of the past few days.

Here are the winners of the Competition section, for the cars registered before 1965. The prize goes to the British crew, Richard and Claire Cook, with their Shelby AC Cobra 289 from 1963.

In the G/H/I section, the prize goes to the Belgian crew, Glenn Janssens and Tom De Geeter with the 911 SC from 1981, who are also the winners of the Ayrton Senna prize.

The participants Albert and Julius Otten, in a marvellous BMW 328 Roadster from1939, classify for the “index of performance”. This BMW is the only pre-war car signed up for the rally.

The Austin Healy 100/4 M from1955, with the mixed crew listing the American Marc Mezey and the English Jack Chatham, brings home the prize in the special class “50’s Sports Car”.

The female crew with Sharlie Goddard and Suzy Harvey come first with the Morgan Plus 8 from 1969.

Paolo Marzatico and Federico Ferrari, win the Race Tracks with their Porsche 911 Carrera 2.8 RSR from 1973.

The winners of the Super Special Stage at the Modena racetrack are Philip Kadoorie and Daniel Wells with the legendary Lancia Stratos HF GR 4 from 1974. The mechanics of this crew, Colin Bastead and Damian Le Breully, were assigned the “Mechanical Miracle 2019” trophy. Without their support, many cars wouldn’t have driven past the finish line.

The Brandoli Special Prize goes to the Ferrari 365 GTB/ 4 Daytona.

With the number 105, John Dennehy and Paul Halford cut the finish line with their luxurious Aston Martin V8 Vantage Zagato Coupè from 1986.

Despite the years, these marvellous racing cars have flaunted all of their power, to the benefit of the drivers and us enthusiasts. We’re surrounded by history and beauty. Congratulations to all participants, and thank you for not leaving these masterpieces in their garages, these with their eight or twelve cylinders which make us vibrate. What a rhythm!

The escort gets ready. François Pourcher rolls the Jaguar XK 120 OTS wheels onto the red carpet and some ladies let go, squealing to greet the legend of a past season. Yesterday they had a poster hanging on their bedroom wall, today they wish for his autograph. Simon Le Bon, the Duran front-man, who exchanges a warm welcome… and the moment would have been even more perfect if he had sung ‘The Wild Boys’.