A day to forget

After the Mille Miglia, described in one of my tales, I was happy to receive Peter Kaus’s invite to drive the 2 Maseratis at his home event Nürburgring. This is a huge event and normally fields 600 cars of all descriptions. The Germans are avid collectors and normally there are many fantastic cars.

I was living at this time at Imbersago in a rented house on the property of my dear friend and enthusiast Count Luigi Castelbarco. I decided to drive to the Ring in my Alfa Romeo 8C long chassis. There was always a race for Pre-war Sports Cars so I entered her for this. The drive took a full day and that evening I pulled up at the guest house where I usually stayed. The next day was a long affair due to the length of time it took to pass 600 cars through a technical inspection.

The following day was a day for qualifying and then there were races on Saturday and Sunday culminating in a race for the 25 fastest cars of the weekend. I went to find Peter and the two cars that I was to drive. I found him with his cars in the old pits which was the nicest place to be. The cars looked fantastic and were mobbed by enthusiasts having a close look. This was the first time they had been seen on the track since then I had finished restoring them, a very satisfying job that I told you before.

Practice went well without a hitch and I managed to qualify both Maseratis on the pole for their respective races. This was a perfect start and Peter was delighted. Saturday was a splendid day with bright sunshine. The weather here can be really awful sometimes with thick mist and freezing cold even in the middle of August.

The pre-grid was called for the race for the Maserati 450S. There was a sighting lap and then a standing start. Standing starts are really interesting and provide another possibility to move up the grid if you make a good one. In the USA they aren’t used for safety reasons, but fortunately in Europe political correctness hasn’t taken over yet.

The Maserati 450S was difficult to get off the line due to too much wheel spin. Remember this car had a 6.4 Liter marine engine with bags of torque. I backed off the throttle and the tires finally found traction and the car took off like a scalded cat. It only took a few turns, before I had taken the lead and I drove on without much fuss to victory.

One hour later it was the turn of the Maserati Birdcage and in a very similar fashion, I was able to secure another victory for its beaming owner Peter Kaus. All Peter’s friends were there, so this was a big deal and I was happy that it was a big success for both of us. 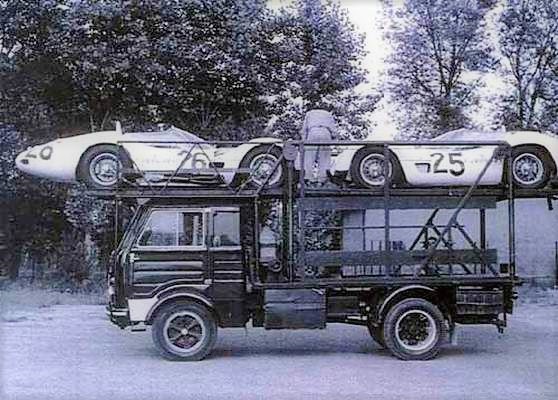 Sunday was a repeat of the weather, hot and sunny. The starting grids for Sunday were decided by finishing order of Saturday’s races. Once again I had 2 pole positions. If only I could convert them into race wins… 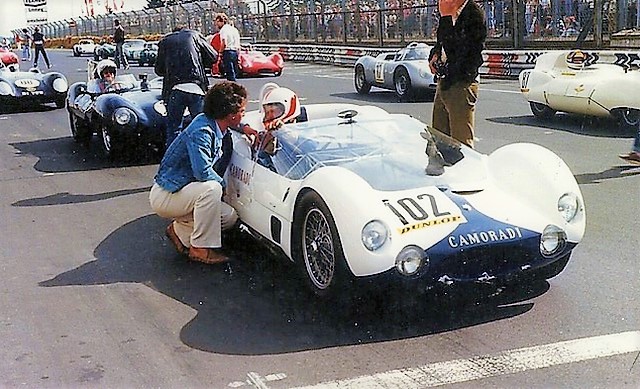 The race for the Maserati 450S was a repeat of the day before and I with little effort was in the lead and going for the victory when I noticed steam coming out from under the engine cover. I looked at the water temperature gauge and it was climbing fast. The performance of the car was the same. I had to stop. I noticed water coming out of the side exhausts. The race was over. A valve had broken and split a cylinder sleeve which was the cause of the water getting in the engine.

I hoped the race for the Maserati Birdcage and the fastest 25 cars would be better. Twenty minutes before the race there was a small rain shower. It had been really hot and some of the oil from the asphalt had come to the surface of the track which made the starting line very slippery. I lined up on pole again and waited for the starting flag to be waved for the off.

I dumped the clutch and floored the Maserati Birdcage. It leaped off the line and then all of a sudden the rear of the car lost traction and the car went into a spin. I tried to correct it, but it was too late and the car swapped ends and backed into the guardrail located at the start. Oh my God, what an embarrassment!

The beautiful long tail was now 2 feet shorter. To make matters worse Peter Kaus and his wife Hannah were standing on the other side of the guardrail. I took the car back to the UK and had the bodywork repaired and tried as best as I could to forget this black day in my racing career. 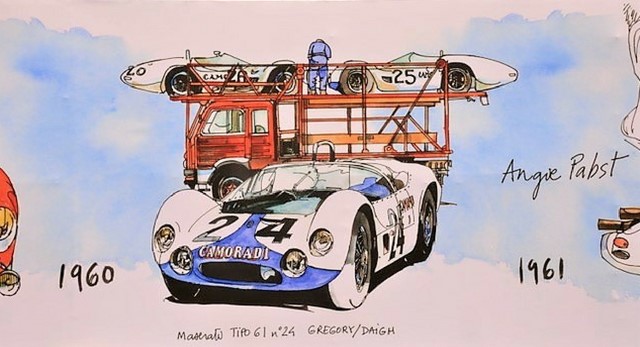