Fiat 500: waiting for the summer 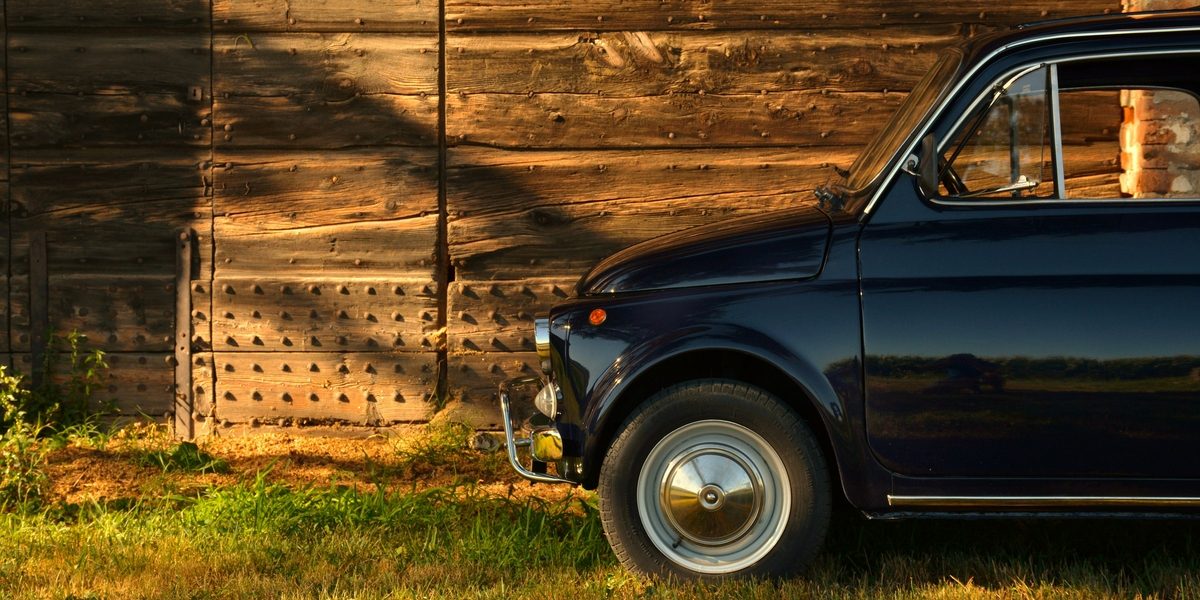 It was never only a car

“Which song would have Rosa chosen for this trip to the countryside?” I wonder while I look at the clear side out of the car’s panoramic roof. I smile and I think about her, Aunt Rosa, a beautiful and bubbly woman. She always carried a black tissue with her, which was scented with violet and had some red roses embroidered on it, will she still have it? She was always dressed in the latest fashion and she drove her Fiat 500 at full speed, like a driver. She used to slam her feet on the brakes and my breath stopped, but the car didn’t want to know about it, as we know, brakes aren’t the strong point of the thundering vehicle.
She drove at full throttle and on the bends, she looked as if she took off, she’s the only one who knew how she could keep it on the road, with that steering wheel which still needed small corrections even on a straight line.
I’m taken over by a wave of memories, while I’m sitting behind the wheel of a Fiat 500, which a friend lent me. 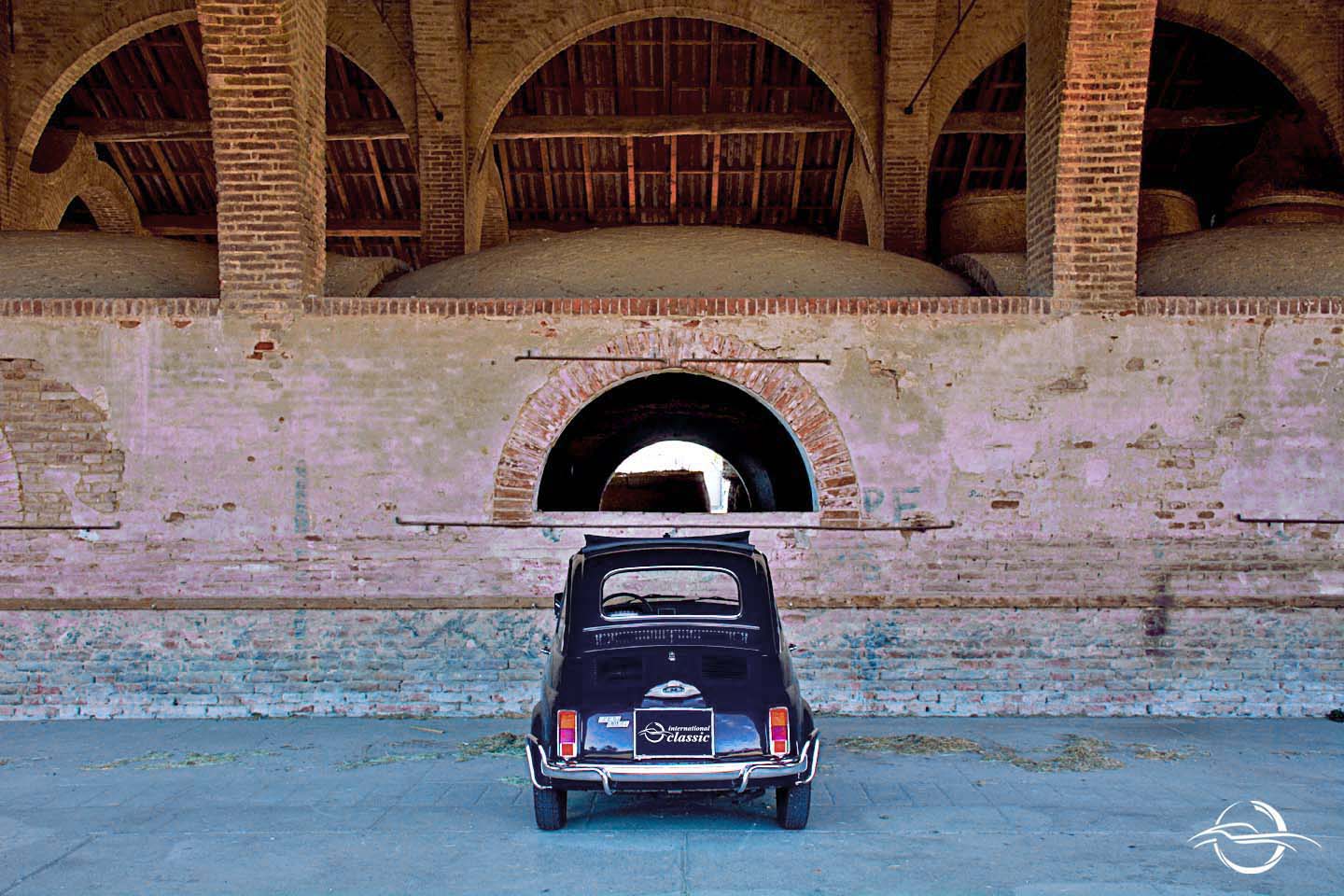 I switch on the car, I lift the air lever placed between the seats and I lift the one next to it. After a few hiccups the engine behind me responds lively. 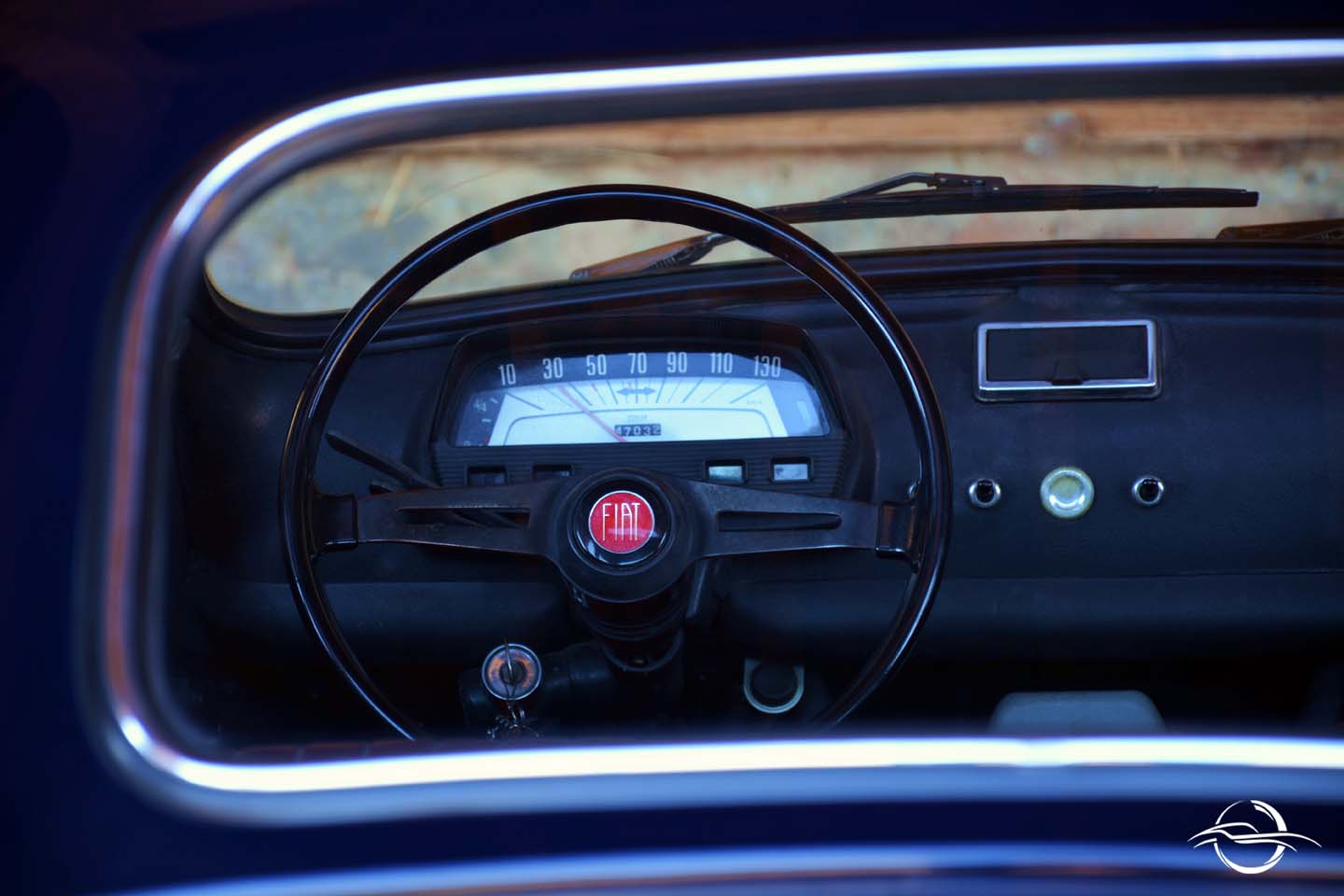 I put in first gear and a voice resonates in my mind, which reminds me about the “doublet”. The Fiat 500, in all of its versions, is known for the classic unsynchronised gearbox, which requires a manoeuvre to enable the gears to fit in correctly and not to hear that unpleasant “crack” noise. It is a game of foot, which is easy when you increase gears, but when I need to decrease them it is a crack crack crack. How grating, it’s best to stop and remember my lessons: I need to brake gently with the tip of my foot, press on the clutch to put the car in neutral, lift it back up and, nearly at the same time, give it a bit of gas, to align the engine’s revs with those of the lower gear. Now I need to push on the clutch for the second time and the gear fits in. You need to remember to be gentle, it’s a game of tip and heel, just like in a dance. In the summer, once the school was over, I was the navigator, a travelling partner for my auntie. We lowered the windows and we opened the panoramic roof to create a survival air vortex which ruffled Rosa’s long red hair. We drove for many miles, Fidenza-Milan, Fidenza-Padua and even Fidenza-Aosta.
The memory is a bit strange, you don’t remember about being bored, about the heat and those sky seats, which only take a word for you to find yourself with a wet t-shirt sticking to your seat. 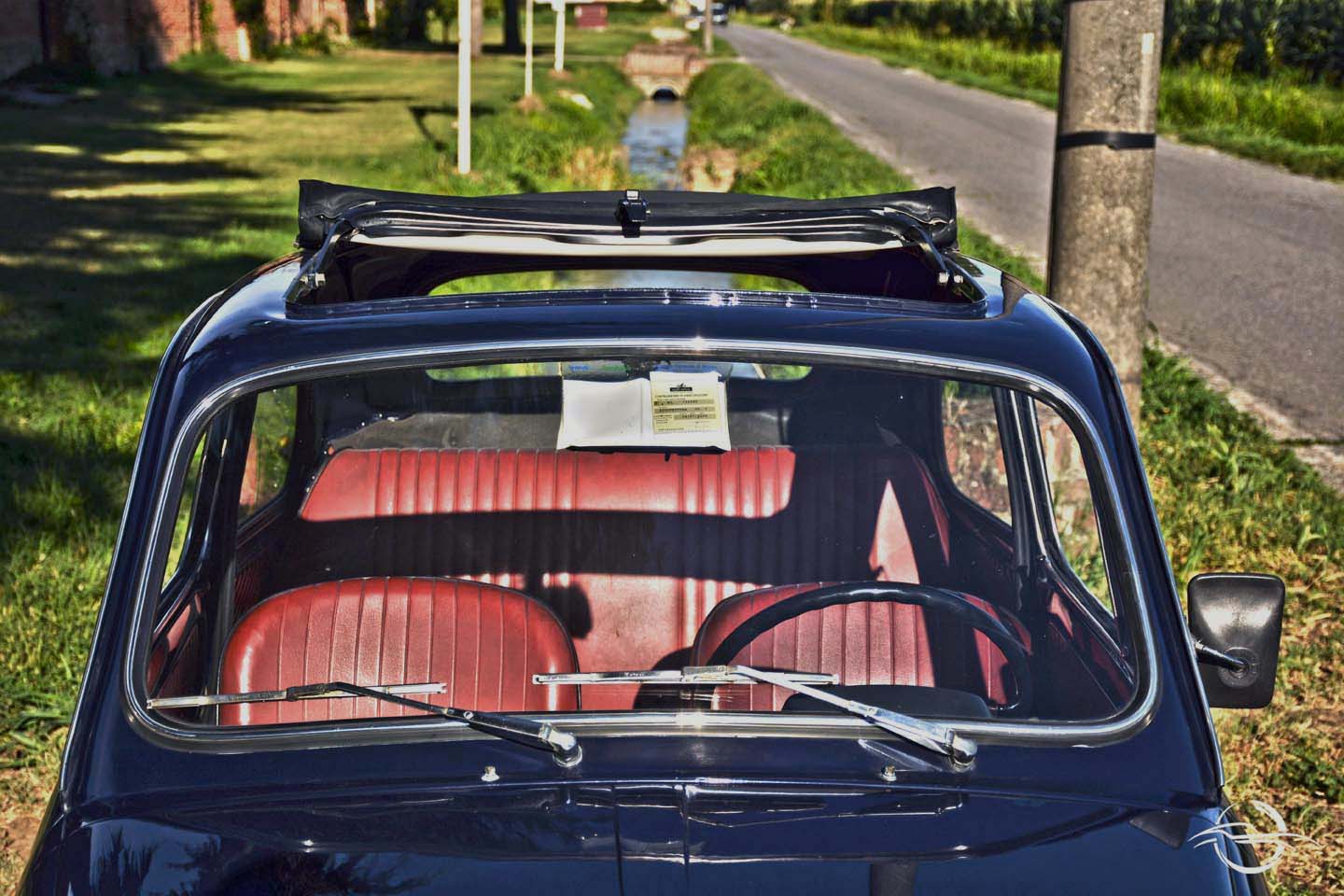 The Fiat 500 has won millions of hearts worldwide and it’s indisputable that it’s the car which has the overall title of “the most entertaining car”. Even the engineer Mauro Forghieri remembers that.
Dante Giacosa was put in charge of creating a super-utilitarian car, destined to replace the Topolino, with similar characteristics and qualities to the Fiat 600 which sold a lot, but with a more accessible price. When the engineer considered the proposal by a young employee from Deutsche, Fiat rejected the engine type, but he promoted its lines, inspired by the roundness of the iconic Maggiolino.

The Fiat 500 was presented in July 1957, during the first Italian economic boom. The first version, named N, was nearly 2.97m long and had a small 479cm3 two-cylinder engine, but it didn’t receive a very warm welcome. The doors opened against the wind, the 13cv two-cylinder engine and the overly basic interiors didn’t convince the public.

During the following years, Fiat proposed several versions, the Sport, F, D and L, introducing chrome plating and a few more equipment upgrades. The public liked the restyling and the sales started taking off. The production closed with a small rotation of numbers, in August 1975, with the last version: the R. 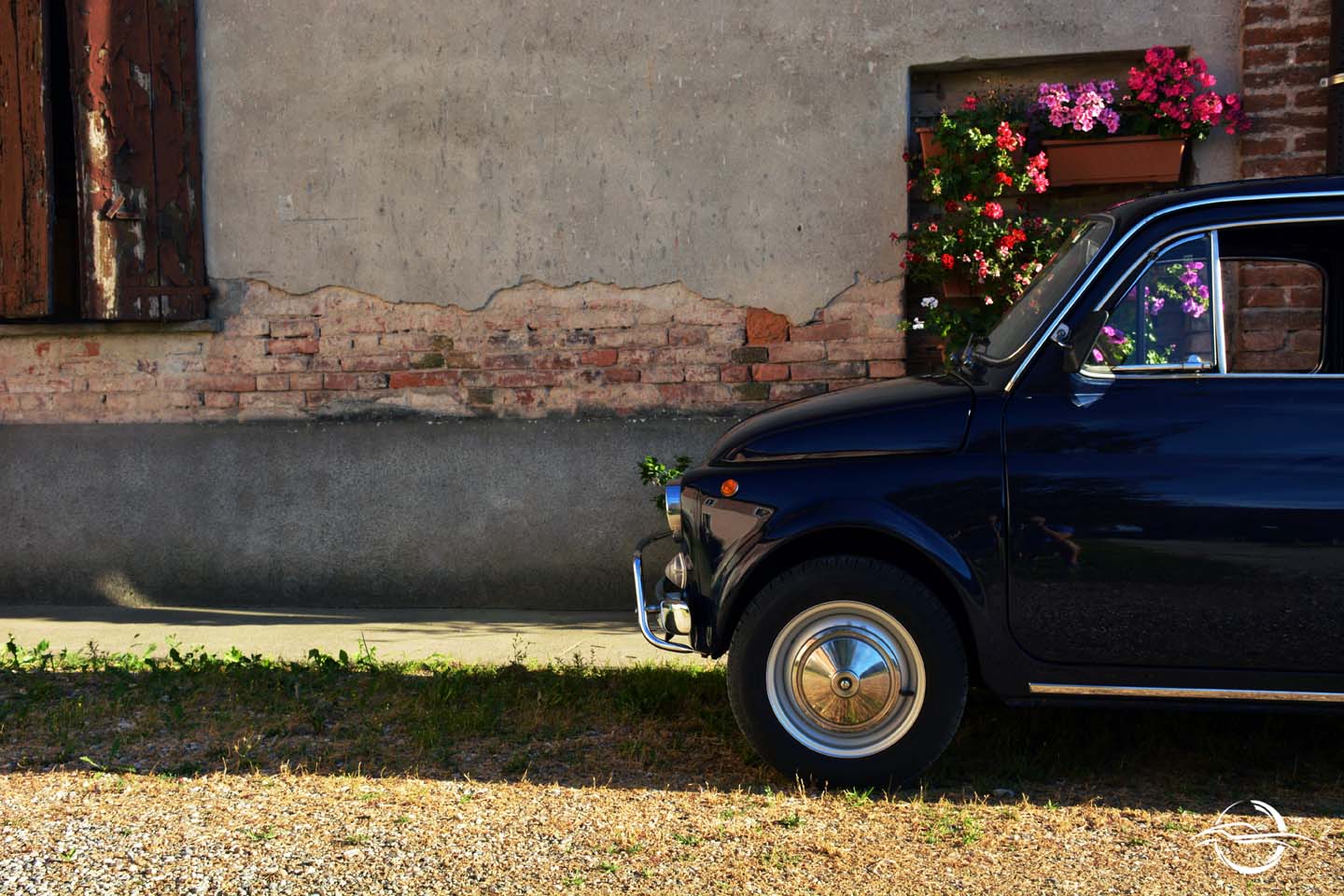 The Fiat 500 which I’m driving now is the L version, which stands for “Lusso” or Luxurious, it is blue with a red interior, it’s fully original and carefully kept. The sunroof and the chrome plating highlight the car, even though we’re still far from the futuristic equipment available in new cars!

I stop the car in the farmyard of an enchanting farm and I observe it from the porch. It might be the light of sunset or the imprinting of an icon which is the symbol of Italianness, but I have to acknowledge that its pleasant rounded shape gives it charm, in its nonchalant essentialism. With only one glance, you may catch the witty identity which distinguishes it. 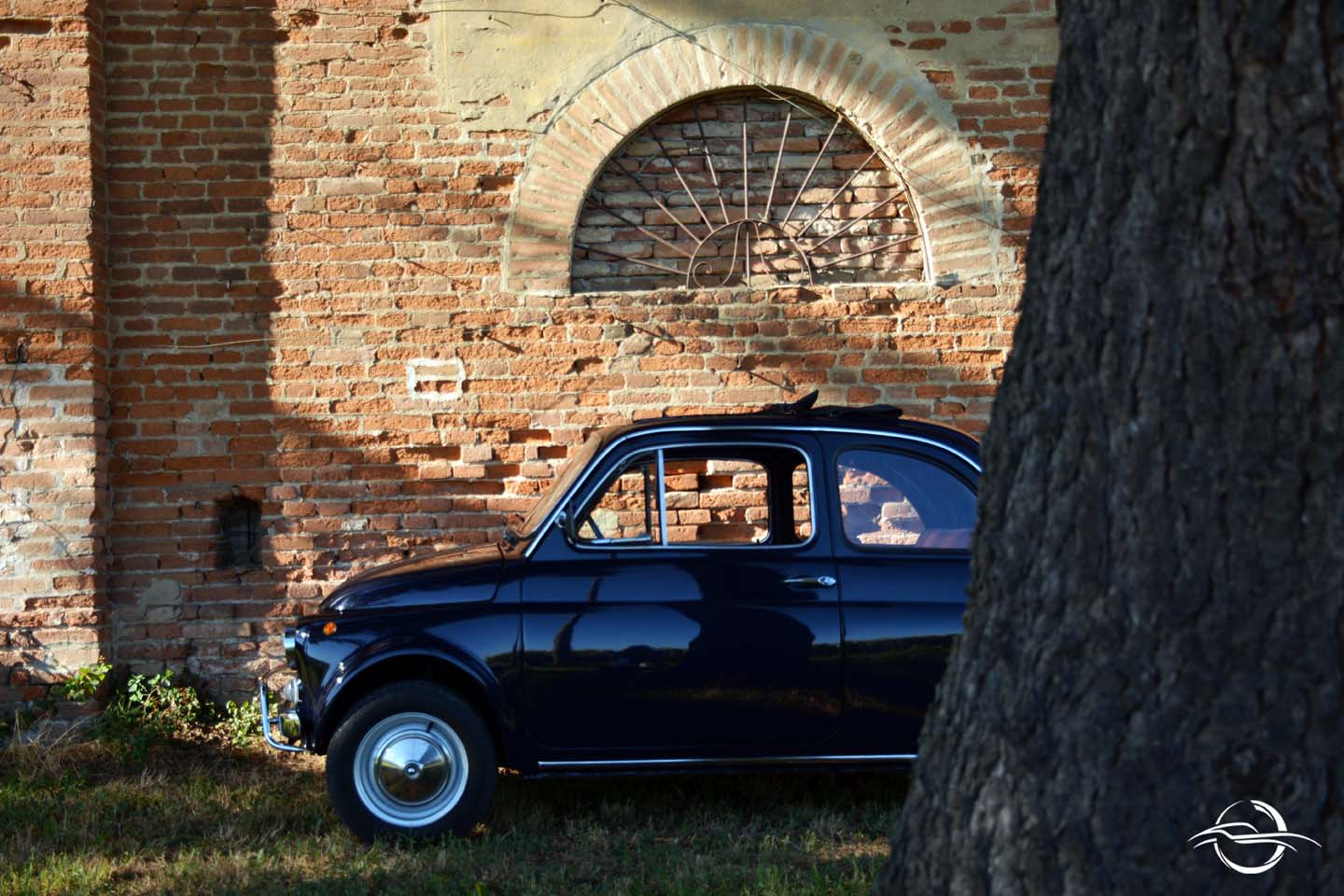 It has already celebrated its seventieth birthday and it has collected prestigious titles over the course of its lifetime, such as the victory at the Compasso d’Oro in 1959, or, on its 60th birthday, the cinquino prize, awarded to the L version, it has the honour of being included in the permanent collection of the New York MoMA. Francois Olivier’s phrase is very well-fitting “It was never only a car”. 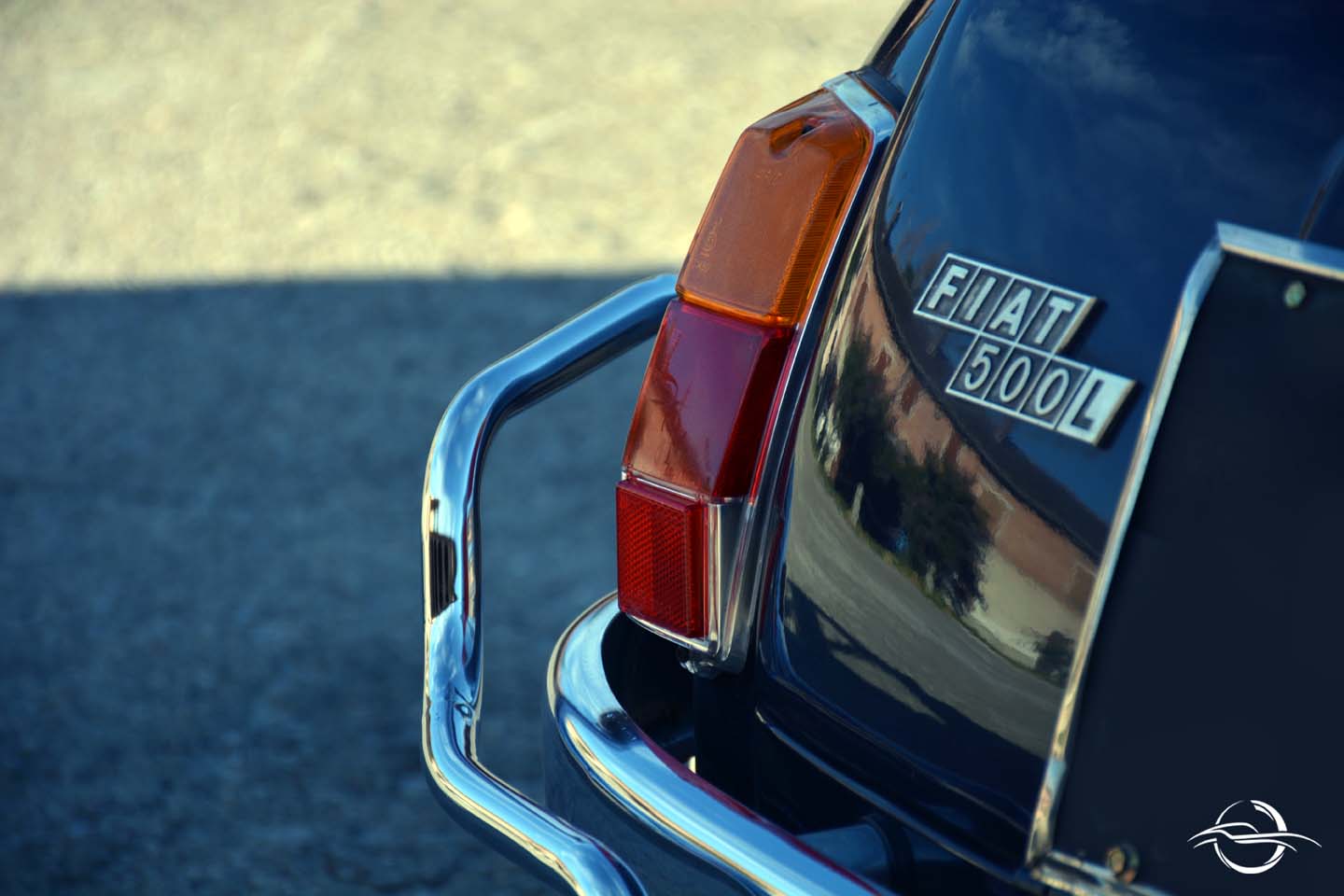 With a willing and due slowness, I run around the fields with the swollen cobs, ready to be placed on the fire. The warm colours of the sunset are the ideal scene to take my leave from my sweet partner.
…Now I call it auntie, what did the song say? 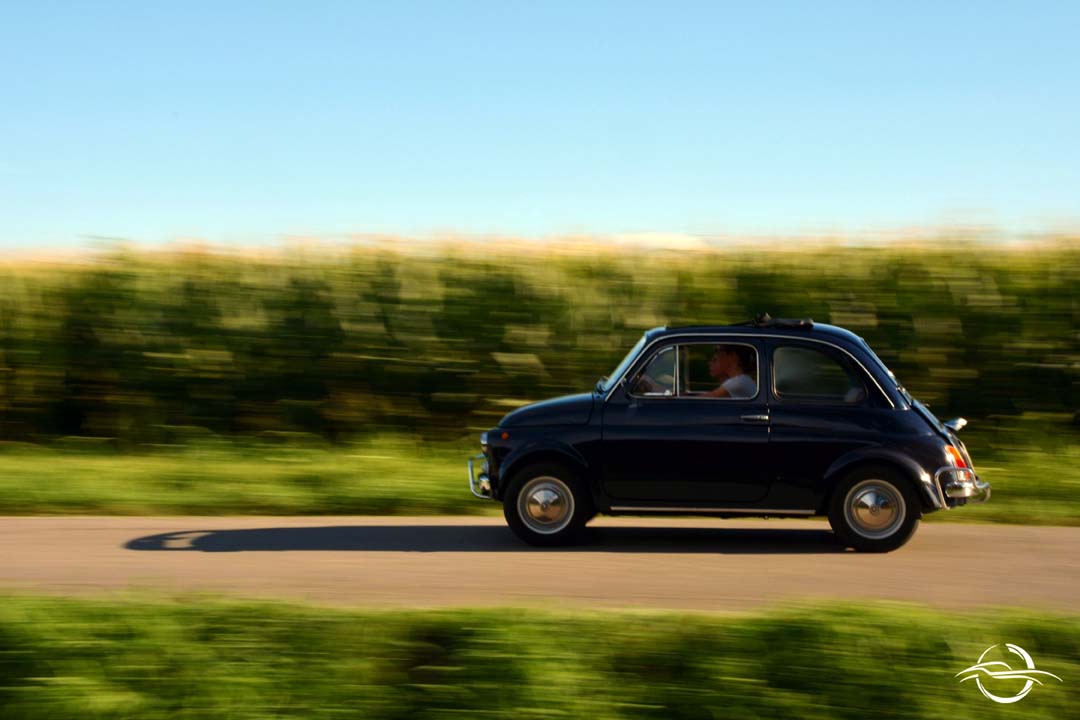