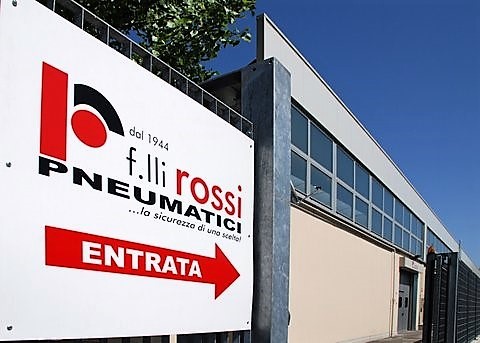 The company F.lli Rossi pneumatici srl, which is now at its third generation of business, with Gianmarco Rossi, was founded in the distant 1944, in a small shop in the heart of the city of Bologna, by its resourceful founder, Trentino Rossi, father of Angelo and Lucio Rossi, who later became established re-sellers in the tyres industry in Italy for collection cars.
In the early 80’s, as some classic cars’ tyres were impossible to find on the market, they had the idea to reproduce them.
This happy intuition was proposed and suggested to different manufacturers, including the very well-known Pirelli Spa in Milan

From the 90’s, F.lli Rossi pneumatici srl, has also provided technical on-track assistance in Italy and abroad, for two famous monobrand trophies “ALFA ROMEO GIULIETTA” and “PORSCHE CUP 356”, with Pirelli CN 36 tyres, which were especially developed and modified thanks to the active designing contribution. F.lli Rossi pneumatici Srl, which, in 2006, decided to exclusively deal with tyres for classic and historical cars, has thus become the official Italian distributor for Michelin, Pirelli, Dunlop, Firestone, BF Goodrich and other important brands, and, thanks to this wide range, they’re able to provide tyres which cover the period between the years 1900/1980.
They are able to offer to the most demanding clientele any service and consultancy, ranging from issues concerning historical cars’ tyres, air chambers with valves and valve accessories, which replicate the originals from the time, as well as snow tyres (including snow tyres) for cars manufactured up to the 1920s, as well as white band tyres, which were very trendy in the 50’s.
Tyres of all sizes by the major brands are ready to be delivered, in order to satisfy the multiple requests by Italian and foreign clients. A library with books, publications, technical literature, specialised magazines for the industry which are now impossible to find even in the best-equipped industry exhibitions, is available for these users.

Furthermore, it i salso possible to consult a precious iconographic archive, which our company is very proud of as it is very useful for our clients, it enables to obtain and find both precise technical and historical information, about tyres of any time.