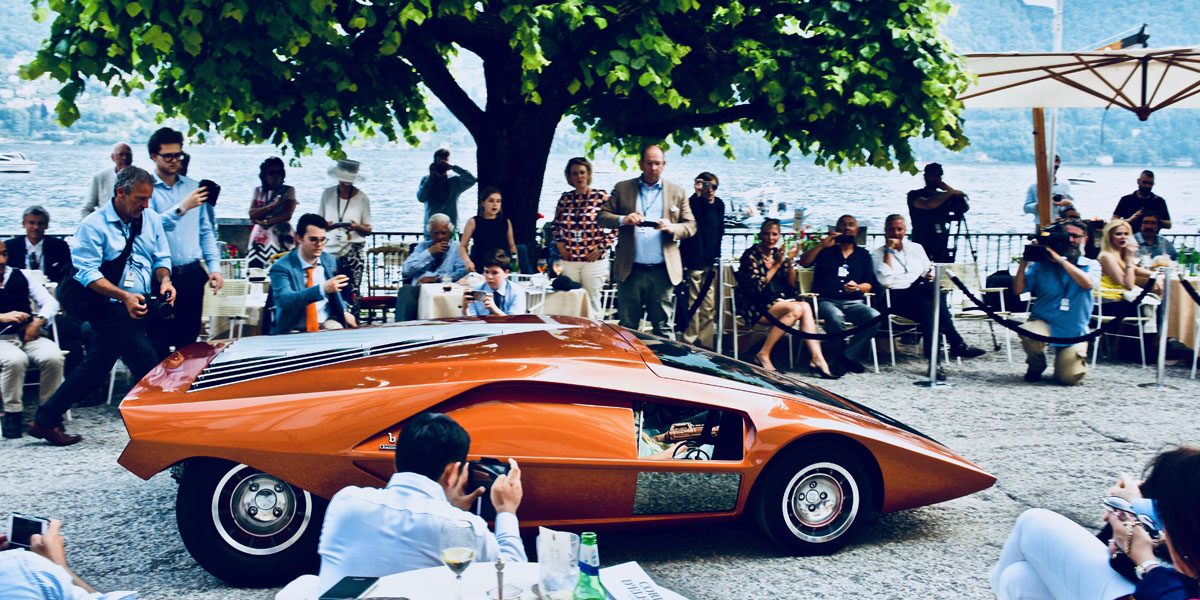 The event on the shore of Lake Como was a suggestive historic feature-length event of beauties on four wheels. There were fifty-one cars which participated in the race at the historical Concorso d’Eleganza di Villa D’Este. The enchanting luxury hotel, with international fame, has been turned into a film set in line with the 2018 motto of the contest: “Hollywood on the Lake”. We assisted in a parade of “timeless” cars, whose production years range from 1909 to 1985.

The sun heated our faces up and it made us half close our eyes, but we couldn’t lower our gaze because the Titans opened the parade. “Dust, mud and risk”, this is the category dedicated to the primordial racing cars from 1909 to 1936. The other six categories followed thereafter.

The projection of a film going from black and white to colour, until we reached present times, with a metal red colour, which was especially designed for an unreleased bodywork of the Ferrari One-Off SP38, winner of the contest’s design prize. The base is a Ferrari 488 GTB, which it inherits a 670Hp V8 3.9 twin turbo engine from, with the bodywork that has been reinterpreted to match the client’s racing needs. A technical and style masterpiece which, in our opinion, in the future will be simple known as “Deborah”.

The winner of the “Best of Show” prize was the Ferrari 335 Sport, Spider with Scaglietti’s bodywork from 1958, which they only made four of, with Andreas Mohringer. The winner of the contest has a V12 engine with 430Hp.

The ASI Trophy and the Gold Cup went to the Alfa Romeo 33/2 Stradale from 1968, competing with Albert Spieß. The exact number of these cars which were made is uncertain. They very likely made 18 chassis, five of which were mounted by famous bodywork mechanics with identifying stiles, such as the Carabo by Bertone. It is curious that, in the late sixties, the Alfa Romeo 33/2 Stradale, with V8 2.0, cost more than a Ferrari 275 GTB/4.

Surprises seem to be never-ending. The “racetrack” is set-up, the grid-girls give us the kit to protect eyes and ears, and this time we’re transported to the fascinating Grand Prix world. The name of the category is ironic, “When sex was safe and races were dangerous: Formula 1!”

The art of restoration had its day of honour. Only a meticulous research, the expertise of experienced artisans, wise hands and their “maniacal” work enables these works of art to continue surprising us.

The restoration work stops time. The owners need to be patient to see their classic cars. A long wait which complies with the manual skills clock,  peaceful but yet hard-working… which identifies with the serenity of the place, Cernobbio, on the shore of Lake Como, the elegance of the park and the Renaissance aristocratic villa, a perfect choreography which has been hosting the Concorso d’Eleganza di Villa d’Este since 1929.

The curtain is dropped for ”l’Hollywood on the Lake”, but the engines aren’t turned off…