“Does your mother know how to make tortellini? Do you speak dialect?” These are the questions that you need to answer to, in order to work with Bacchelli. When I ask him to confirm that, he nods. That’s right. Franco Bacchelli has always cared to give his bodywork a “familiar look”. And he succeeded.
– Do you see? He’s Samuele, he’s been coming through that door for nearly thirty years now: his father works for us. While Cristian is here with her son. In my opinion, this is essential. When I go to a restaurant and I see that the whole family works there, I trust them more. I also have a daughter who works abroad. Family is important for me: it has always been. 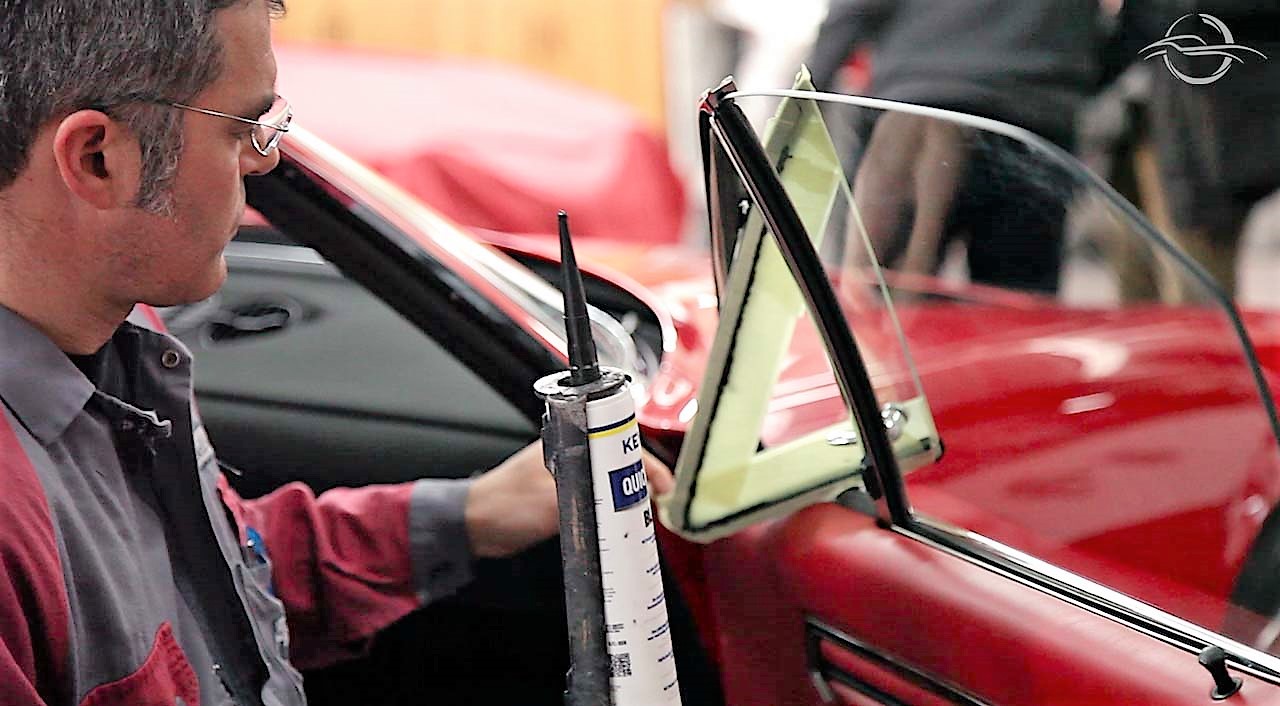 But that isn’t the only reason. To aim on the profession made in Emilia Romagna, which, for Bacchelli, also has the meaning to preserve excellence, a common heritage, a treasure. And Bacchelli cares very much for that: he has a strong conscience, not only in relation to the value of his profession itself but also in relation to its historical value. The importance of preserving and conveying. That is due to the fact that years are passing, and also because he’s personally currently experiencing a moment of change. Bacchelli is selling his bodywork shop, and his eyes are moist when he talks about it. On the other hand, a business is like a creature. However, his story doesn’t certainly end there. Quite the contrary actually; when a door closes, a window opens somewhere and the window in question is a beautiful project. 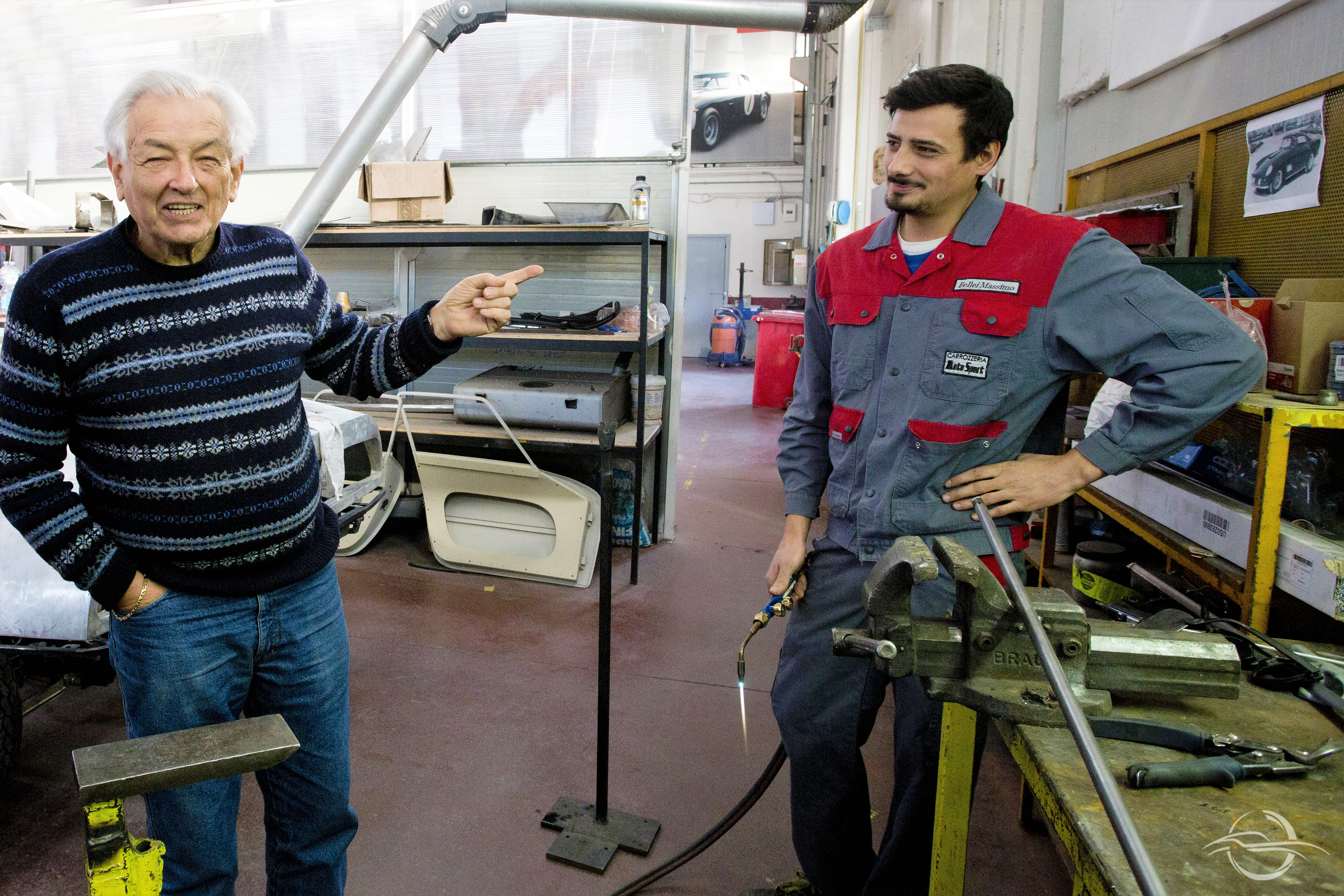 A project with capital P, which pulls the threads of a story which began many, many years ago…
– At home, when I was little, there were eighteen of us. No, they weren’t all my siblings. Mine was a typical farmer family from the era. Like the “Olmi” family, even if “The tree of the wooden clogs” was set in the Bergamo province, and ours was a farming family from Emilia Romagna. Everything revolved around the sdora, the woman of the house – the one who rolled the pasta, just to be clear – and all the others came after her, such as uncles and aunties, cousins. We lived just like that: all under the same roof.
– And how did it happen that you didn’t stay to work the land in the countryside?
– It wasn’t possible. So, when I was 14, my father took me to Modena to search for a job. That is when I started my experience in the industry and it happened, overall, by pure chance. The bodywork shop where I started to work was owned by a driver who came from Latin America…

Franco Bacchelli when he worked at Sports Cars by Piero Drogo

At the time, Piero Drogo, was a star. His lucky star started shining in Venezuela, where he moved to (from Piedmont, where he was born) in his early twenties. Venezuela Gran Prix, 1000km in Buenos Aires, Cuban Grand Prix… his return to Italy was basically when he was receiving the laurels of honour. With regards to the reasons which drove Drogo to leave Latin America, Bacchelli talks about coup d’ètat and changes of regime. Specifically, he mentions the Cuban switch from Batista to Castro.
– I used to tell Drogo all the time, to pull his legs: you left Cuba because it was full of communists and you came to the reddest region in Italy! Many people arrived from Latin America during those years. For example, De Tomaso came from Argentina. Then the Rodriguez brothers… once I saw them drinking from the water hose. “Those are the Rodriguez!”, someone told me. I thought it was strange, to see them there, right in front of me. To me, they were only some short guys, who drove very fast. Drogo was part of that wave of migration. As he was so famous, he easily got in the Ferrari. He wasn’t an entrepreneur, he was an enthusiast… so in the end, I became an enthusiast too.

– And what did you do, when you worked for Drogo?
– Ah, the shop boy! At the time it came automatically, it was impossible to do anything else. First, they had to teach you. I did everything, I filled up, I went to pick up the tanks, I helped them to keep the metal sheets close together, to solder… I was a shop assistant. When the opportunity to choose came, I chose to work in the painting department. 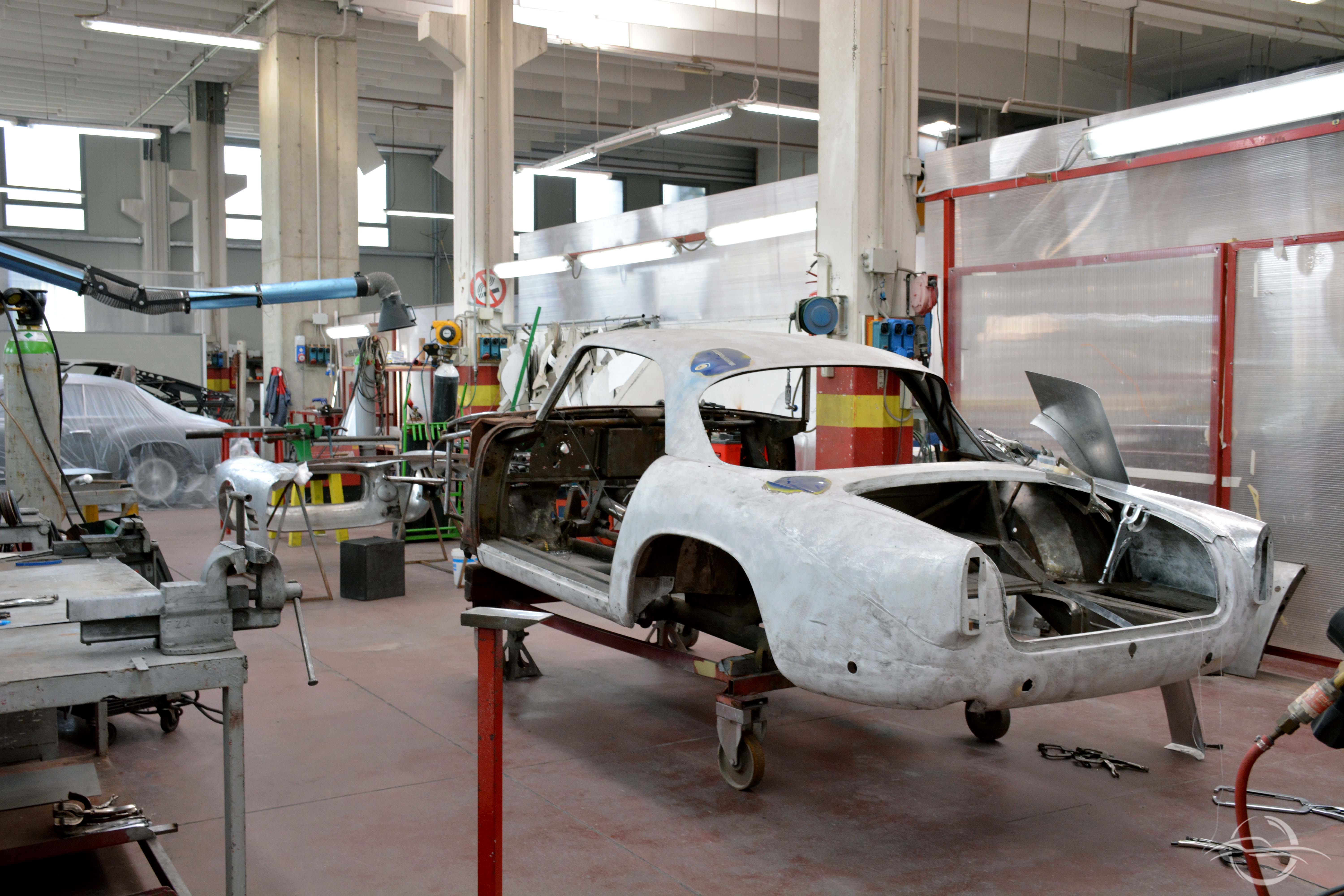 – Why the painting department?
– I was always fond of colours. When I was little, I liked to help painting the carts with the brush.
He talks about all of this with simplicity, as if it wasn’t an actual vocation, but instead a choice which he stumbled upon, along his path. And his path, since he worked as the shop boy, at Drogo’s body shop, has been long. In between, there was the time of military service, which Bacchelli reminisces about happily. This man of the land – son of a farming family, like the “Olmi family” – during his military service’s months, he turned into a “man of the air”, when he felt the state of inebriation through flying. When he talks about it, he cannot do otherwise than laugh and talk about the challenges that he participated in, when he was in the aviation corp. Top Gun-style manoeuvres and exercises, which you struggle to imagine him doing because, Bacchelli, is everything but braggart, he’s a simple man… who willingly talks about himself, but he does that without exclamation marks. And that is how his professional life unravelled, with uttermost and disarming simplicity.
When he got back from military service, Bacchelli was too old to work for someone else, even if this “someone” is named Piero Drogo. Are people born to be entrepreneurs or do they become that? That doesn’t seem to matter much, what truly matters is the result. Bacchelli opens a body shop, but he’s not alone. With him, amongst others, there are also Mr Gatti and Mr Cremonini… as well as other well-known names in the industry. But people with decision-making power are too many. “Too many minds”, he says, but he’s not argumentative at all, and he says that he nipped the experience in the bud. The company that he opens this next time is definitely less difficult to manage. To the extent that the owners are just him and his cousin: Mr Roberto Villa. – Do you know what his daughter called him? Nuvola Nera (Black Cloud)!
Mr Bacchelli drafts a filigree portrait of his shady and taciturn business partner, who was fully devoted to his job. He was one of those who always had black and calloused hands, which were, however, able “to see”, they were sensitive to the matter and its endless potential. “Previously, Roberto used to repair motorbike tanks… which were difficult to do. The old ones were beautiful. They had such noses! Now it’s a different matter, they’re all square”. He talks without lingering too long on what was the ace in the whole in their professional relationship: diversity. Structural differences which, however, didn’t clash with each other, quite the contrary, they integrated each other based on a happy complementarity. Bacchelli and Villa, “the strange duo”. One was extremely shy, bent over his work and always hammering his metal sheet – the other one friendly, perfect for those which today we name public relations.
As an embodiment of the saying “birds of feather, flock together”, the “Bacchelli and Villa” opens their doors in 1972 and it soon gives people something to talk about. The contacts with Ferrari soon take off, with the repair of the fibreglass bodywork of the 308 GTB and, afterwards, with the construction of the prototypes for the 512IPLM and of the 308X. In 1980, the bodywork shop becomes Autosport. Then, in the ’90s, there’s another turning point: an intuition which will be turned into a continual flow of work. Bacchelli and Villa start looking back to the past, but they do so with the cognition of the present and with an eye towards the future. The era of classic cars restoration beings.
– Where did the intuition to restore in those years, when nobody was doing it yet, come from?
– Well, you know… firstly, you know people. The first cars I worked on came from Belgium, they were two Ferrari 275’s. The 275 is one of the most restored cars. Over the years, we’ve restored around 50 of them. 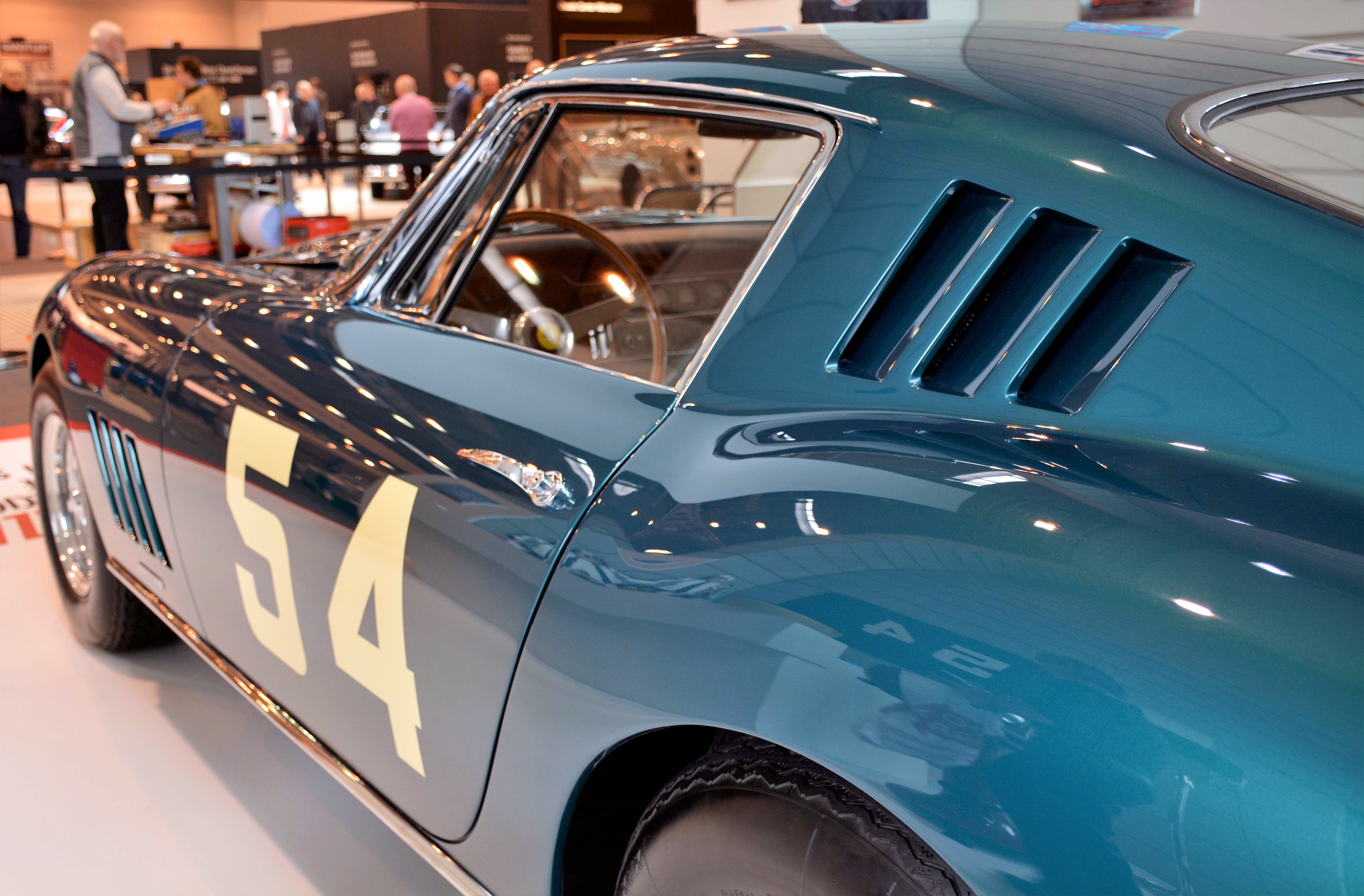 – You must have seen many changes in the materials, through your years of working in this industry! For example, in terms of paint.
– What actually changed is the support. I’ll say one thing: in 1976 I was authorised by Scaglietti to paint fibreglass cars. At the time, we used acrylics to paint, you gave it 14-15 coats, then they sanded it down and they polished it: sure, it was something prestigious, but it was very difficult. It wasn’t easy to paint on fibre. I don’t know why Scaglietti authorised me to do it, but since then, I evolved significantly in this area. Even today, I have orders to paint composite materials, such as the F 50… yes, I received orders to paint some Ferrari 50, because they also had some doubts on carbon fibre. I painted all of the grids on the door and under the door on the Ferrari 348, as well as for the 355. I also painted tractors. The rewarding aspect is that I was one of the first to paint composite materials. And to this day, we paint Lamborghini polyurethane dashboards.
– Is aluminium one of the materials which you’ve noticed changing too?
– Aluminium is still Italian, which is the raw 98% aluminium (thus with a little tin). It is very different from the English aluminium, which is cured and is better tamed. It’s the typical aluminium from the area, this one, the fact that it’s raw aluminium. When we use it, we even put it under the sun to be able to work it better. Then, of course, other materials arrived too, but raw aluminium is still the Motor Valley’s distinctive number.