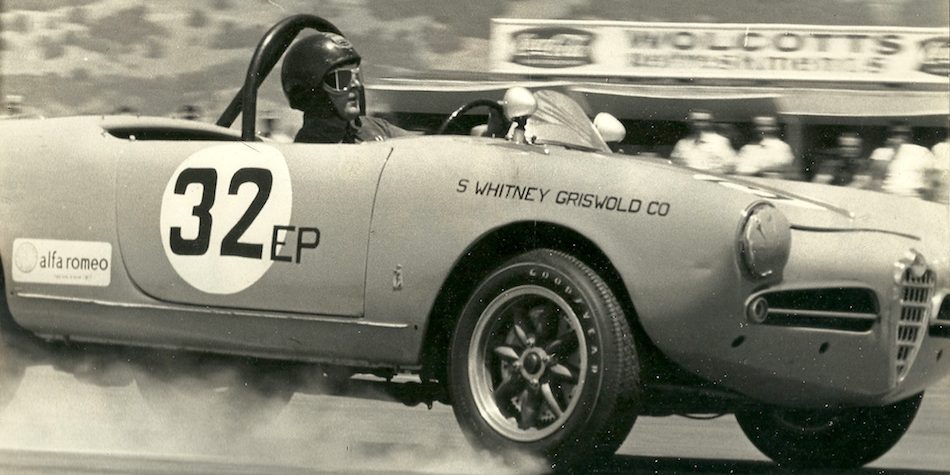 When I went to the West Coast to go to University I drove across the USA in my Alfa Romeo Giulietta 750 Spider Veloce. These were jewels of cars and very fast. The tuner of the day was Conrero from Torino who modified them to perform even better. These cars were the scourge of their class in SCCA racing and took all the laurels.

After I finished University and started my business I went to the SCCA driver evaluation course at Vaca Valley Raceway to get my competition license. I had my first racing car, an Abarth 850 ss Record Monza. The car was a ball to drive, but not competitive in its class which was full of Porsche 356 Speedsters.

I knew I needed a faster car and the Alfa Romeo GTV sprang to mind. There was a fully race prepared one for sale nearby so I made a call to go and have a look at it. The Owner had bought it new and it had never turned a wheel on the street only the racing track. It was prepared by the local Guru Merit Carden in Fremont and was a wonderful car.

Burt Jensen, the owner, was a Narcotics Agent and the flourishing San Francisco drug trade and left him with no time to go racing. This was my good luck! I bought and raced the car with mixed results in the first year, partly because I was learning my craft and this Alfa Romeo GTV need a bit of development.

I decided to rebuild the car for the following season and apply my own ideas to make it go faster. This included making the first set of spoke magnesium wheels ever fitted to an Alfa Romeo GTV. I did many small modifications to the engine mainly special pistons which gave a ratio of 12:1. We were allowed to racing gas so this high ratio was possible.

I went to my friend Ed Winfield to have some very special camshafts made. This man was a genius for camshaft design and had learned his craft from Hot Rod days. I also bought the aluminum panels from the works Alfa Veloce Sebring Spider, which helped reduce the weight
The most important race of the SCCA calendar was the midsummer race at Laguna Seca.

This was my target and the track was very fast which really suited the Alfa Romeo GTV. I finished the car and painted it a Buick color Loud Mouth Lime Green which became my color for some years to come. It was highly visible so people could see you coming and would know that this color meant: fast car, move out of the way. At least this is how I saw it!

The practice was a full grid with five Lotus 7s and twenty 356 Porsche Speedsters. I was the only Alfa entered. I made 3rd fastest time and eyebrows were beginning to raise.

When the race started, The Porsches were faster off the line due to a bigger engine with lots of torque, but by the time we got to the first turn, a flat out one, I had taken the lead and never relinquished it until the checkered flag. I had lapped the whole field through 3rd place. When I came off the circuit, I was told to take the Alfa Romeo GTV to impound, because there were 200 protests that the car must be illegal as it was way too fast for an Alfa.

When it cooled off, the Technical Committee disassembled the engine and did a check on all the rest of the car. Nothing was discovered and I finally got to enjoy the sweetness of my victory!

This race later earned me the Sports Car Driver of the Year.
I sold the Alfa Romeo GTV to one of my employees who then won the SCCA annual runoffs and was SCCA national class champion. The car still races today and still wears its “Loud Mouth Lime” color.

Without a doubt, it has the highest number of racing miles of any Alfa in the world.