A wonderful weekend at Monterey I beat the World Champion and triumph at Pebble Beach

Monterey is a beautiful town, located on the California coast and the doorway to Big Sur. Additionally, it became famous for John Steinbeck’s book ”Cannery Row”, but to get to the point, it is the Birthplace of Northern California Sports Car racing, where the first Pebble Beach road races were held in 1950. After the death of Ernie MacAfee, in his Ferrari 121LM during the 1956 races, the road course was deemed too dangerous and in subsequent years a new circuit was built on the Army base at nearby Fort Ord. It ran around the periphery of a dry lake and was therefore called Laguna Seca.

Laguna Seca is known throughout the world for the incredible races held there. This was the ideal circuit on which to hold the Monterey Historics, which began in 1974. I had just finished restoring my 1932 Alfa Romeo 8C2600 Monza n.211043 in time for the 1975 edition, which honored Alfa Romeo.
Among the entries, was the World champion Phil Hill, driving an Alfa Romeo 8C 2900 Mille Miglia Spider. He had owned and raced this car at Pebble Beach in 1950 – Ralph Lauren now owns it.

I was really looking forward to this meeting on the track. The Alfa Romeo 8C2600 Monza was really fast and I had massaged it to 190HP on my Dyno. Two weeks before, I had ruptured my Achilles tendon, participating in a Squash match. I really didn’t want this to get in the way and keep me out of the races. When I went to the hospital, I asked the doctor to make a special cast for my leg, that would allow me to drive the Alfa Romeo 8C2600 Monza. He did just what I asked, although he advised against it.

The day of the race, I made a dramatic entrance on the Starting grid with my crutches and peculiarly shaped cast. Everyone thought I was mad!!! I was! Phil Hill and I lined up at the back of the starting grid. Steve Earl, the organizer, often set grids like this – the fastest cars at the rear – to make the races more exciting… there would be more spectacle and passing. I was sure that Phil and I would have a good race. At the start, I had passed half the field by the first turn, with Phil tucked in behind, and by the time I reached the Cork Screw, I was firmly in the lead.

I soon realized that I was at least two seconds a lap faster than Phil. I had really done a good job on my car setup, so I slowed down to let him catch up, to keep the race interesting for the spectators.
When the checkered flag fell, I was really elated. Job well done! Phil was the first to congratulate me. He was always the consummate sportsman and enthusiast as well as a good friend. 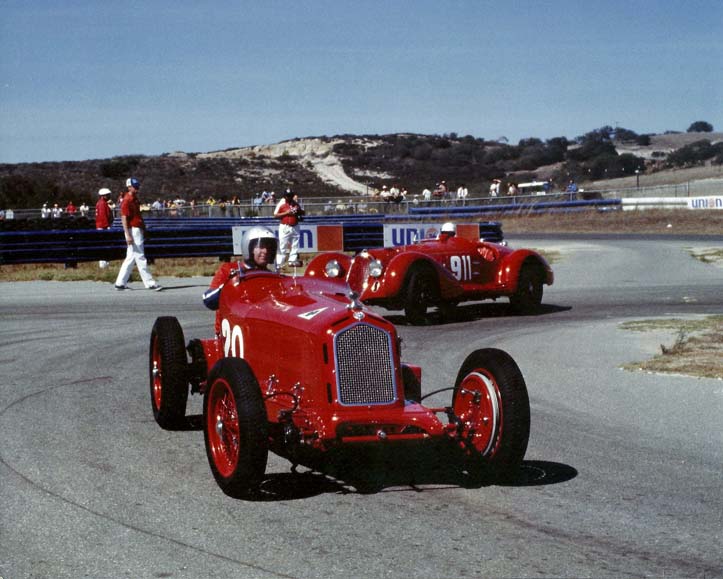 Later that day, the organizers of the Pebble Beach Concours d’Elegance, invited me to bring the car to Pebble Beach the following day. They always selected a few of the most interesting cars from the races, to put on display. I had to remount the fenders to make it look its best – Alfa Monzas competed as both GP cars and Sports cars.
When the time came to give the awards, the organizers called my name on the loud Speaker, asking me to bring the Alfa Romeo 8C2600 Monza to the awards presentation ramp. I had won the Prestigious Pebble Beach Cup for the best presented and raced car of the meeting. What a weekend I had had. Everything was perfect. It was like receiving your school report card with all straight A’s.