I first saw this lovely little 166 Competition Berlinetta upon my arrival in the San Francisco Bay Area, to attend University in 1969. After driving across the USA, I needed to take my 1957 Alfa Giulietta Spider Veloce in for service at the local dealer, Don Hampton, in Palo Alto. Don was a car lover and owned a new Zagato Maserati A6G, he asked me if I wanted to have a look at it and of course, I said yes. Parked next to it was the Ferrari, bearing its black and white ROMA plates.

It was lovely and I fell in love with the beautiful lines created by the artisans at Carrozzeria Touring in Milano. It had transpired, 9 years before, that the Milano Ferrari main distributor, Franco Cornacchia, had purchased the bare chassis and had Touring build this Superleggera – very lightweight – body on it. The car was born as 002C, a Spider Corsa, and then renumbered to 020 I, as was often done by Ferrari in the early days. I didn’t know then, that 12 years later, I would be her owner.

Don Hampton sold the Ferrari to Robert Lavezzi, who lived near to Berkeley, in El Cerrito.
I would occasionally see the car being driven around town; gone was the rasping sound of the V 12 because Robert, for economic and reliability reasons, had installed a Chevrolet 283 V8.

A few years later, I opened my new racing car preparation shop and began my first restorations. An ad appeared in the classified section of the local paper and there was the Ferrari for sale. I had to have it even with a Chevy. I made a deal with Robert and handed over $5000.00.
The first order of business was to find a suitable engine. Through some friends, I heard of such an engine in Los Altos Hills, near to where Silicon Valley sprung up in recent times. 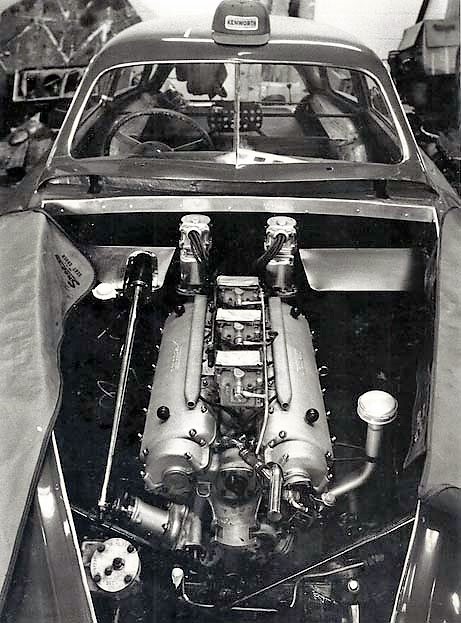 The owner of the engine was Johnny Johnson who was a Ferrari owner, I went to his house to meet him and have a look. I had been told that this engine was 0201, which meant that it was a street engine. The racing engines in this period all had even numbers, that matched the chassis number. I looked at the number and something wasn’t correct. Italians have a very distinct 1 and this number was a straight vertical line (I). I didn’t point this out to Johnny, made a deal and paid the engine. I was delighted with my purchase and was confident that the real number was 020 I, the missing engine for my car: I was Correct!

I started immediately with the restoration of my little jewel. I would come in on weekends and work on her, which was wonderfully satisfying. All was in good order and nothing was missing, including the aircraft oil filter, which was actuated by the clutch pedal like a ratchet wrench. I ordered new high-domed pistons from Mondial (the original Supplier) and made new valve guides and valves in my machine shop. Over a period of many months, I assembled the engine and was ready to put it on my dynamometer for testing. The day of the test, I came into the workshop and to my horror saw 2 piston rings on my workbench for my engine: oh God! I forgot to put them on a piston.

What to do? The only choice was to disassemble the engine and look. When I removed the last piston, I found all the rings were in place. Then I heard all my guys howling with laughter.
They had taken the rings from the extra piston – I always order an extra just in case – and placed them on my bench to test me: this was a wicked joke, but in the end, I was laughing as well.
When the engine was tested, it had a healthy 180 HP @ 7200 RPM, more than the factory attained. Beautiful noise too!
I will write more on the car later to give my driving impressions.