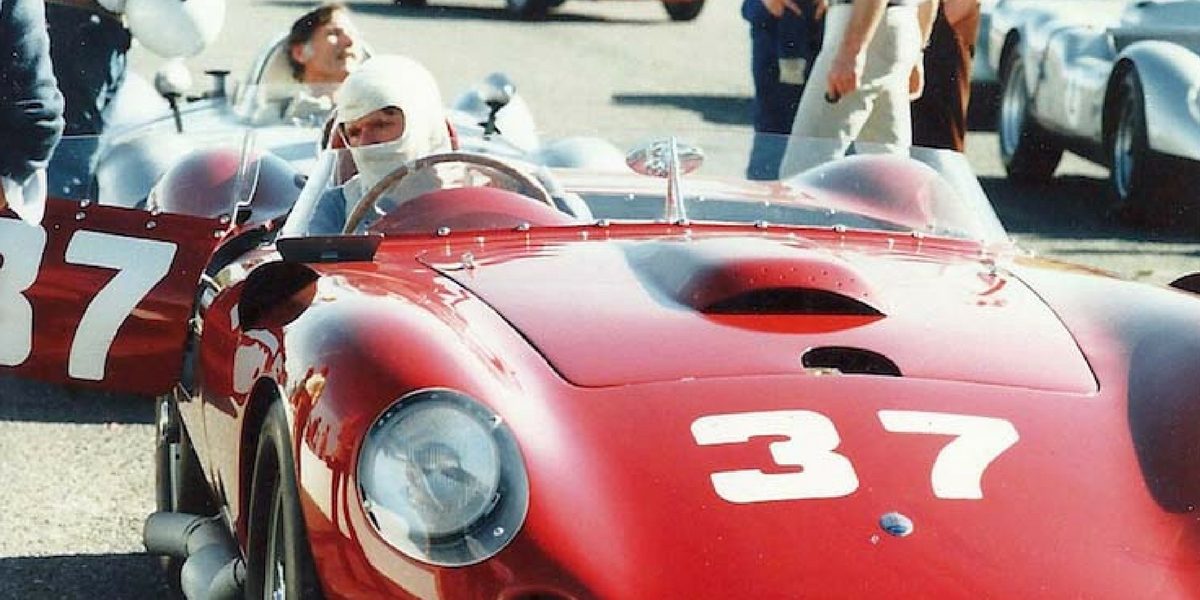 Peter Kaus was a very well-known German collector and heir to Metzler tires. On his 21st birthday, his father gave him a new 550 Porshe Spyder to go racing and this started him on the road to open the best museum for sports cars the world had ever seen, Rosso Bianco Collection. He opened it in Aschaffenburg not far from Frankfurt where he lived. He was a frequent visitor to the Monterey Historics and he bought many cars from the auctions which were held there annually to fill his museum.

Peter was a frequent visitor to my shop in Berkeley and often wanted to buy cars that I was working on. One such car was the Maserati 450S n. 4506 which I had just finished for Joel Finn. Peter was a real lover of Maserati cars and it was his idea to put together a wonderful collection of these for his museum. I put him in touch with Joel and they were able to work out a deal. I was scheduled to drive the car at Monterey and this was cleared with the new owner. I was able to finish 3rd with it which was a good result for this big car on the twisty Laguna Seca circuit.

After the race, the car was put in a container and shipped to Peter in Germany and it received pride of place in his museum. Six months later Peter called me and asked if I would like to join him for the Historic Mille Miglia in this car. I thanked him and accepted and we agreed to meet at Brescia for the start. Peter arrived with an entourage from Frankfurt who was to provide the backup and follow behind with a service vehicle.

All was agreed and we set off on our tour of Italy in the Maserati 450S. I noticed immediately that Peter was having a really difficult time changing gear. His only experience with a racing car had been his 550 Porsche Spyder. This car had a fully synchronized transmission so changing gear was a delight. The Maserati had a full racing transmission with direct engagement dog rings and one had to have a good feel and a sense of timing and then it shifted like a hot knife into butter. The more Peter tried to shift the 450S, the more he became frustrated and angry. I don’t think things were made easier for him by having me sitting beside him. Finally, the situation got so bad that he started shouting “Scheiβe” (shit) every time he tried to shift and the car protested loudly with a heart-wrenching grinding sound. This was really getting on my nerves and I finally suggested that maybe someone in the service car might like to ride with him and he accepted this. I really couldn’t stand any more of his brutal behavior towards the Maserati 450S. I hated to see mechanical abuse.

My transfer to the service vehicle wasn’t much better. The friends of Peter drove like lunatics and delighted themselves by forcing their way through traffic at the expense of all others sharing the road and sometimes they even went on to the sidewalks forcing pedestrians to seek safety to avoid being hit. I really hated this terrible behavior especially considering what sacrifice the Italians had made to allow their public roads to be used for this unique event.
In the end, nobody wanted to ride in the Maserati 450S and Peter had to finish by himself.

Before he departed for home after the Mille Miglia, he kindly invited me to come to Nürburgring Historic Festival that August and drive the 450S and the Camoradi Le Mans Birdcage Maserati, which I had just finished restoring for him. This sounded pretty good to me so I penned it in on my calendar and looked forward to August.

Discover more about the story of this Maserati 450S