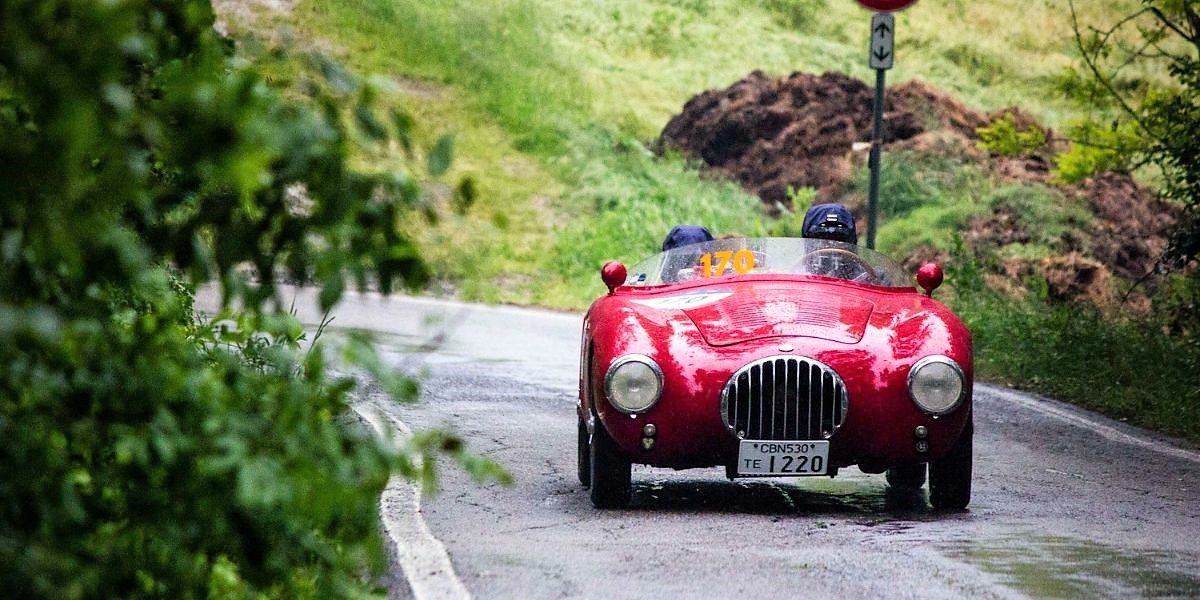 The emotion aroused by the Mille Miglia isn’t only triggered by the presence of the world’s most beautiful cars. There are other nuances of emotions, which are deeper and linked to the senses.
These senses bring you back to distant memories, to sensations which have apparently been archived in your mind.

The acrid smell of petrol, which brings you back to one of your grandfather’s 112s, whose burgundy bodywork was always polished.
The roar of the engines, exhilarated by the free exhaust pipes, which bring you back to being that child, who asked his father to put the car in neutral to push on the accelerator and to rev up, being careful not to go over the rev counter’s red area.

And walking through the crowd of enthusiasts and curious people, you can catch this invisible flow of emotions, just reading it in their eyes. If only you could view this flood of memories, you could write a series of novels about them.

And then there are the children. Children leave these emotions in a more straight-forward manner, their senses are more instinctive, linked to what they are living in that precise moment. When they see a flaming racing car, they would like to be drivers, right there and then.
And the brief story that I want to tell you is about children.

It’s the pre-race check-in day in Brescia, and, according to tradition, the sky is weighed down by clouds which aren’t very promising. “I hope it holds up”, is the most common statement pronounced by every team member, even by the most superstitious.
Are you wondering which team I’m referring to?

It’s a nine-people team, including seven musicians, who, on that morning, have the duty to bring the Mille Miglia’s spirit to the suburban areas of the city, where the race is only barely perceived. Obviously, they do so with music!

The last stop of the different concerts is in a small square, not far from the district’s primary and middle schools. Our spectators are around two hundred children.
The band selected for the occasion is a marching band which includes seven elements and which proposes 60’s and 70’s Italian music, with wide Balcanic contaminations, in both rhythm and style. I mean, it is impossible not to dance!
A classic car should have been supporting the initiative, which has lent from an enthusiast’s collection. But at the very last minute, we discover that the car won’t come, apparently due to a breakdown.
And what do we do now?

There’s not even time to think about it, the square fills up with children. A small impatient and festive army that can’t wait to get a hold of the Mille Miglia’s flag and wave it about. They ask about the car, they have partly come for that reason, but our musicians start their show quickly, involving the children in dances, laughs and twirls.

Stefano, who’s a very good friend of mine and one of the minds behind this initiative, doesn’t give in. We promised a super racing car to the little scholars and they will have one.
And there he is, he quickly ducks out without giving explanations, towards the long main road surrounding the small district.
Five minutes go by, then they become ten. Where has he gone?

Right at that moment, the band notes are silenced by a deep and biting roar. Before we even have the time to understand where it’s coming from, an OSCA MT4 1100 2AD drives into the square, driven by a couple of Japanese people, Hiroyuki and Yu Takigawa, who are probably father and son.

The children, who are now so enthralled by the music show, they improvise a chain around the car, they laugh, shout, they have a whale of a time!
Shortly afterwards, the two Japanese very elegantly make us understand that they’re late for the imminent pre-racing check-in and they set off towards the city centre, visibly happy for the unexpected side-tracking.
While the dancing continues, I approach Stefano.
“Please tell me from which cylinder hat you extracted an OSCA with two Japanese on board?”

“Well, we couldn’t disappoint the children. Not long ago, I stopped at those traffic lights and I asked every classic car driving past to follow me, saying that two hundred children needed them! The first car’s crew pretended not to understand, the second and the third told me to get lost thinking me crazy, the fourth attempt went well.”

There, my memory of this Mille Miglia are the eyes and smiles of 225 children, who will remember the event like that day in May, when they danced the song “24 Mila Baci” in Balcanic version, forming a chain around the rumbling super racing car, in flame red, driven by a strange couple of Japanese.