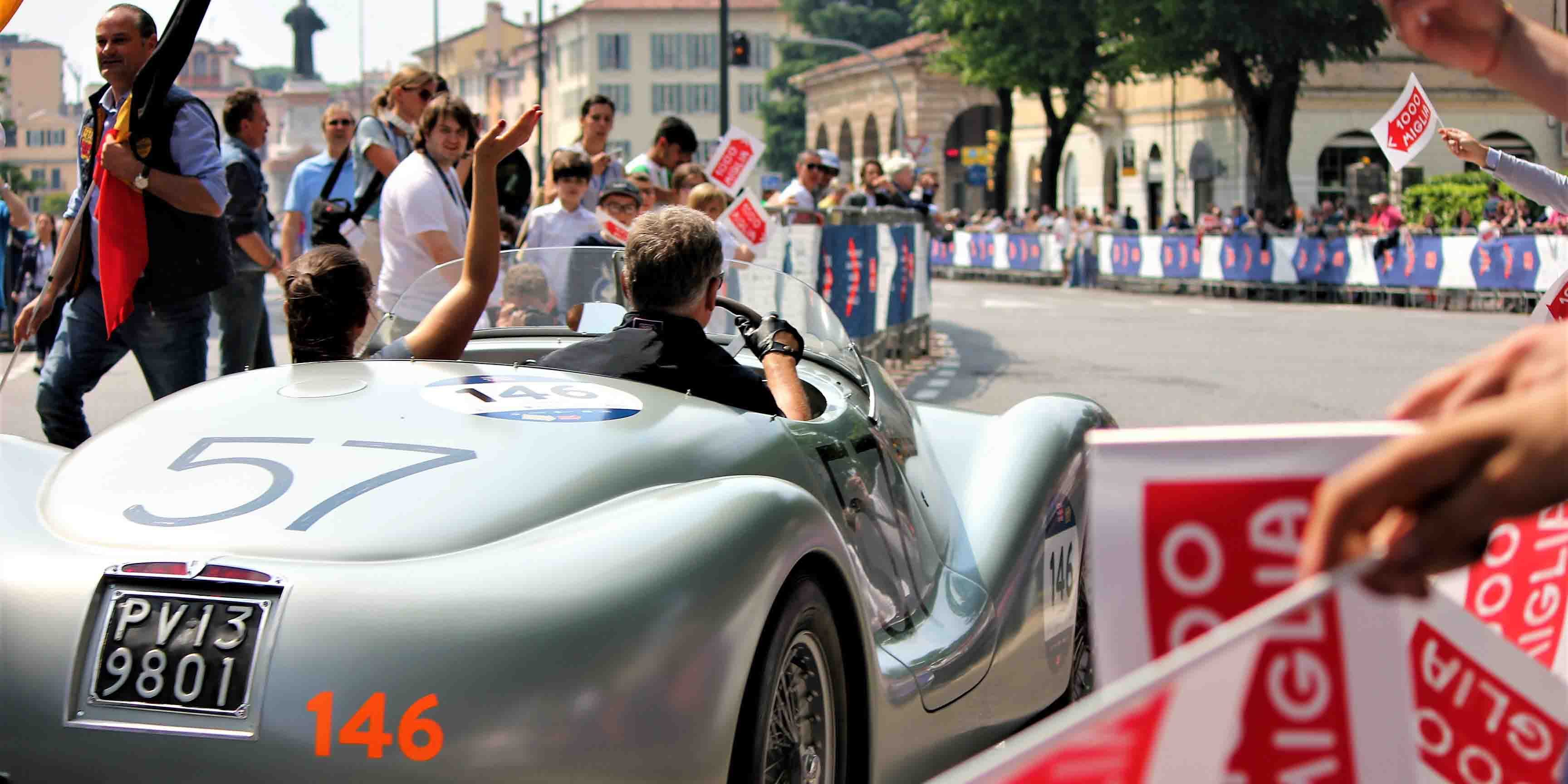 Once more this year, the recall of the symbolic red arrow, the collectors world, from the five continents, punctually responded in large number. Nourished by the number of members, who would have liked to share the “dream of four romantics”, Mazzotti, Maggi, Castagneto and Canestrini. The creators of the Mille Miglia, “the most beautiful race worldwide”. 450 crews participated in it, coming from 34 different countries.

The Italian roads turned into the natural centre-stage for these rare cars, coming even from very far flung places, which have given life to the charming “world’s only travelling museum”, as defined by Enzo Ferrari. Classic cars of outstanding historical value, belonging to 73 different manufacturers, and which we saw competing in this re-evocative ride.

The first act took place at the Brixia exhibition centre. The pavilion was turned into a chaotic ants’ nest with the arrival of the protagonists, their tidy and covered arrangement and the beginning of the verifications.

The cars, driven by the most enthusiastic of owners, with the help of their mechanics, followed one another in an harmonic coming and going, which was still quiet. For some, this was a familiar environment, where time slipped by while greeting the numerous friends present.

For many of us, it was an annual occasion to admire these collection pieces still in a “static arrangement”. The cars which participated in one of the glorious editions of the Mille Miglia were 101; the unrepeatable and legendary thirty year celebration, 1927-1957, which has come to an end. It is impossible to delude yourself that this may come back and make comparisons.

Once a year, the prestigious treasures, which have written some of the most exciting pages of the international motorsport, participate in the appointment in Brescia, to fire up their engines, some of these cars coming directly from museums of various constructors, others from private collections. We saw a parade of Bugattis, Mercedes, OM Superbas and Alfa Romeos 1500, 1750, 2300, 8C e 6C, BMW’s, Lagondas, Stanguellinis and O.S.C.As, the list is very long…

The friendly Ms. Paola Biondetti, with her likeable Tuscan accent, while showing us the Clemente Biondetti Cup, told us “my great-uncle, Clemente Biondetti is the only driver who won the Mille Miglia four times. He had a brusque Florentine personality, a man of few words, measured through sense and intelligence. His first victory was in 1938, with an Alfa Romeo. We’re here to remember this first victory of his, where he also set the speed record at 135 km/h. The Mille Miglia has given us the opportunity to insert this cup into the event and we’re very happy about it, as a family, as well as a team. In pietrasanta, at the Museum dedicated to the specialist of road races, will be a jury with 30 members who will select the Alfa Romeo which is most representative of the Mille Miglia 2018 edition, the award ceremony will take place later, in Brescia”.

Ms. Paola is the grand-niece of the well-known Florentine champion, at her seventh start for the world’s most beautiful race with a 1951 Jaguar XK 120 OTS #235. Clemente Biondetti is one of those drivers who, with their bold driving style and, with their victories, have given to the famous race that resonance and celebrity that it still holds to this day. The cup was won by the Dutch team Ad Branderhost and Nanette Branderhost Ouwendijk, with their Alfa Romeo 6C 2500 S Berlinetta Touring from 1944.

The enthusiast, Duccio Filippo Lopresto, son of the Alfa Romeo collector, Corrado Lopresto, made a joyous and representative participation: “The restoration of our Alfa Romeo 6C 1750 Gran Sport from 1931 was performed by the Nuova Rinascente of Dino Cognolato, for the bodywork. For the colours, we were able to collaborate with Milan’s Engineering School, which helped us to find the original white and blue, starting from two black and white photographs which we had for the car… the photographs were scanned by the Engineering School. We managed to find, and them to reproduce, the colours at 99.9% of originality“.

“For example, blue is a special colour which combines different shades of green, light blue and blue, which was developed especially for this car… which is a unique piece. A Count had it made in the 30’s, using a racing Zagato 1750 chassis. It’s the first time that this car has participated in the Mille Miglia, the driver is my father, Corrado, and I’m the co-pilot, but we alternate as there’s a lot of driving involved. I’m super exciting because this is my first Mille Miglia… I even got a bit ill, I’m that excited! It’s exciting to be able to participate in this race with a car from the 30’s, it is unique and it isn’t easy to drive… the top speed which you can reach is 180 km/h, it’s a super performing car”.

Mr. Fabrizio Rossi, at his first Mille Miglia, has introduced us to Elisabeth, a marvellous O.M. 665 SS Superba from 1930 with compressor, Corsica bodywork – an English bodywork mechanic, who’s well-known for his jobs on Bentley, Bugatti, and Aston Martin. Mr. Rossi explains that, in the past, some of these cars were in England, where there are only 11 registered today. Many of them came back to Italy, others went to Germany. Elisabeth was imported from Great Britain and the restoration of this jewel was fully performed in Italy.

“This car has a beautiful history” we have a fortuitous meeting , in a bar in the centre, with Mr. Giovanni Luca Murru and his co-pilot, Massimo Destro Castaniti – “this B.N.C. 527 Monza was bought in 1927 by a Belgian diplomat. In 1928, he moved to Saigon, in Vietnam. In 1965, the car was purchased by an American soldier, who took it to Ohio. It was in a museum for ten years and then it was taken to Michigan, to race on a track. Later, it was purchased by an English, and the car flew to Birmingham, and then it was purchased by an Italian once again. In 2013, I purchased it and we’ve been participating to the Mille Miglia for four years… this is my tenth race, but the emotions which I’ve conveyed by this car I’ve never had from any other car before. Because this B.N.C. is a particular car, from before the war, with no home-comforts, it’s hard, it’s difficult… I wouldn’t be able to do anything without my co-pilot, he does everything…”

For the second act, we moved to Piazza Vittoria which, just like in the past, is still the centre for stamping the participants’ cars.

The enthusiasm is growing… The large crowd at the outskirts of the square is excited, and they are lined all along the path of this Travelling Museum.

Here we met Perletti Ezio and Riccardio, father and son. Mr. Ezio is a Mille Miglia veteran, he’s been climbing the stage in Viale Venezia for twenty years; while his son is at his third experience. Riccardo, born in 1994, is driving an Alfa Romeo 6C 1750 Super Sport Zagato from 1930. Despite his young age, he’s a great fan and a fierce runner… they finished in thirteenth place!

The start from the stage in Viale Venezia is an unmissable appointment. One by one, queued and ready to unrein the horse power.

A magical, suggestive, contagious and infectious strength was perceivable, where the past mixes with present. The drivers, immersed in anxiety, the public encouraging them with their shouts. The rumble of the engines, the heat of the sun.

The crews saw a scenery of history and art of some of the most beautiful Italian places. hamlets and squares paraded in front of their eyes. The natural beauty of the Italian countryside, natural reserves and charming places is just as suggestive, which they have crossed during their journey, an actual trip of exploration and discovery.

During their journey, from Brescia to Cervia, from Cervia to Rome, from the capital city to Parma and, finally, from Parma to Brescia. The speed race from the past was turned into a regular race. The last lap against the clock was in the small circuit at the Alfa Romeo Museum in Arese.

Tiredness lines faces, but some of them are bewitched by the public, the enthusiasm and the charming shouts of children, who are still willing to celebrate. A smile for cutting the finish line.

The full ranking is available here.

See you next year at the Mille Miglia 2019, always the same and yet always different.

A special thank you for the Brescian welcome to Mr. Salvi from Salvi Assicurazioni.